Trump Was Probably Wrong About Coronavirus and Suicides, But the Associated Press Botched Its Fact-Check

It wouldn't cause more deaths than COVID-19, but an economic crisis could indeed raise the suicide rate precipitously. 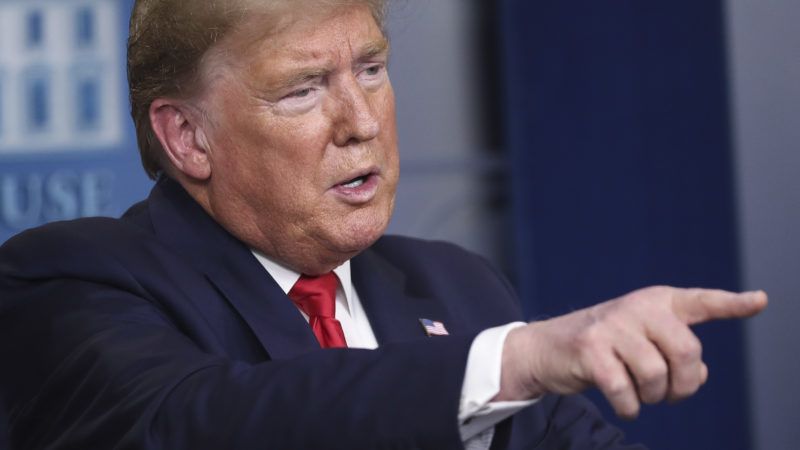 On Tuesday, President Trump warned that keeping the country under lockdown could drive people to recession-induced suicide and that the number of deaths "probably, and I mean, definitely, would be in far greater numbers than the numbers that we're talking about with regard to the virus."

To the extent Trump was suggesting that the economic costs of fighting the coronavirus are likely to produce more suicides than there would be deaths from the disease if the U.S. government did nothing, he's almost certainly wrong. There were about 50,000 suicides in the U.S. last year. Even if this number increased dramatically, it would be very difficult to match the estimated deaths of COVID-19, which are in the hundreds of thousands or even millions under worst-case, do-nothing projections. If aggressive countermeasures to limit the coronavirus' reduce the COVID-19 death toll to a bad flu season—the outcome many are hoping for—you would still have a problem at least as serious as the national suicide rate.

But while Trump likely exaggerated the trade-off here, the Associated Press—which published a fact-check of the president's remarks—went too far in the opposite direction: significantly understating the possibility that suicides would increase if prolonged social-distancing measures lead to a sustained economic downturn.

"There's no evidence that suicides will rise dramatically if nationwide social-distancing guidelines that have closed many businesses and are expected to trigger a spike in unemployment stay in place," wrote A.P., prefacing this remark with a "THE FACTS" heading.

This is technically true in that we have not been able to run this exact experiment in some sort of laboratory. But suicides do tend to rise during periods of economic turmoil. During the first year of the Great Depression, the U.S. suicide rate surged from about 14 per 100,000 people to 18 per 100,000. In 1932—the last full year of the depression—the suicide rate reached its all-time high of 22 per 100,000.

A.P. is aware of this fact, but bizarrely waves it away with this line: "The even higher suicide rate seen during the Great Depression of the 1930s fell sharply with the onset of World War II." That an even larger crisis saw declining suicide rates a full decade later is cold comfort. A.P. cites an expert who claims that "war and natural disaster" cause society to pull together and thus drive the suicide rate down, but a man-made crisis caused by deliberate government action to shut down the economy is neither a war nor a natural disaster.

Another fact-check of Trump's remarks on suicide, published by ABC News, was much more responsible with its claims:

According to the Centers for Disease Control and Prevention, suicide mortalities have gone up every year since 1999, but it's still "selective" for the president to latch onto that, says Richard Dunn, associate professor of Agricultural and Resource Economics at University of Connecticut who has studied the connection between markets and depression.

"The general fact that President Trump cited is, in fact, true that when economies contract suicides do go up," Dunn said, acknowledging how the financial crisis of the early 2000s triggered more suicides, "but that is not the only cause of death that responds to economic downturn."

"If you were to look across all the current causes of death in a recession, you would see that the number of deaths actually declines. Heart deaths from heart disease fall. Deaths from motor vehicle accidents crashes fall," Dunn added. "One of the few activities that we have left to us in many parts of the country is to go out for a walk, so physical activity tends to go up."

"So we actually see overall that there are fewer deaths in economic downturn—but suicide is the one major cause of death that does not follow that pattern," Dunn said.

It's one thing to say that Trump exaggerated the likely impact on the suicide rate. It's quite another to say the impact is something we would have no reason to consider at all.