Austin, where America's third party is scheduled to have its national convention May 21-25, is in lockdown mode. 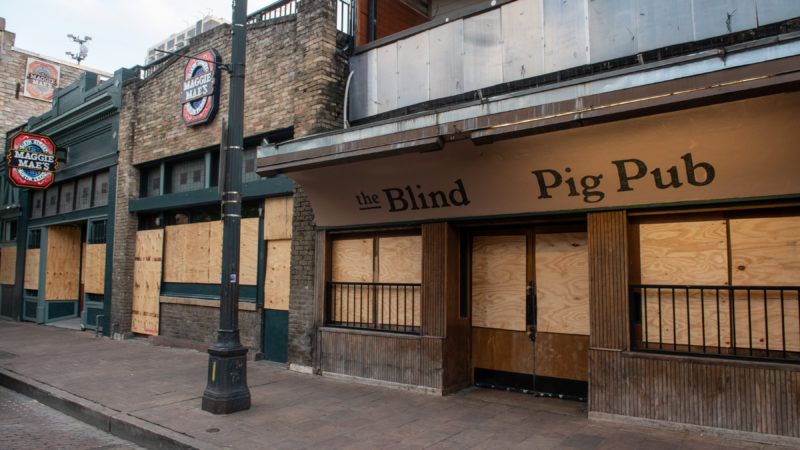 On Tuesday, the city of Austin, Texas, issued a coronavirus-avoidance stay-at-home order that permits residents to leave their homes only for "essential" work and activities, such as providing medical care or buying groceries. The order, which lasts preliminarily until April 13, could have at least an indirect impact on the 2020 presidential race.

That's because Austin is the site for what was scheduled to be the May 21-25 Libertarian National Convention, and because the convention—quite unlike its Democratic and Republican counterparts—is the sole venue and mechanism by which the party's presidential and vice presidential nominees are determined. Rather than arrive with delegate slates earned in binding state primaries and caucuses the months before, Libertarian candidates show up, vie for scarce space on the debate stage, then endure however many rounds of voting it takes (lowest candidate lopped off after each round) among the 1,000 or so delegates in attendance until someone wins 50.1 percent of the vote.

"We are evaluating all of our contingency plans," Libertarian National Chair Nicholas Sarwark told Reason Friday. "There's a range of options that range from, if we don't have a convention at all, then the national committee remains in place for another two-year term…and the vice presidential and presidential nominees would be chosen by the national committee…[to] the opposite end of the spectrum, [which] is somehow the curve gets flattened and bent and Texas becomes a safe haven for uninfected people or whatever, and we all just show up in Austin in a room with a thousand people packed closely together just like we were always planning."

"I think both of those extremes at the ends are not likely outcomes."

So what are the contingencies in between? The Libertarian National Committee (LNC) is scheduled to discuss precisely that a special meeting conducted via Zoom Thursday night at 9 p.m. ET. Sarwark reckons that some kind of remote meeting, or an Austin plus remote hybrid, might be set up with a pared-down agenda focusing mainly on candidate selections both for the presidential ticket and the LNC.

The convention website on March 19 informed delegates, "The Coronavirus crisis is of an incredibly fluid nature, and as of the writing of this 61 days before our event, it is still too early to make any 'permanent' plans…Expect more definitive guidance as to the plan for the event about one month before the delegates and attendees are scheduled to arrive for registration and credentialing. For now, we can expect release of more definitive guidance on 4/20."

Added Sarwark: "Basically the convention oversight committee meets weekly with updates and is in constant contact with the venue, and then they give me updates at a slightly lower periodicity. We're looking at probably somewhere around 30 days out, maybe three weeks out, to make a final decision."

There have been seven nonbinding Libertarian primaries and caucuses thus far, with longtime libertarian intellectual Jacob Hornberger getting the most votes among human contenders in five, and political satirist Vermin Supreme in the other two. (Because we're talking about Libertarians, "None of the Above" received the most votes in the North Carolina primary, and "no preference" won in Massachusetts, where there was also a 23 percent chunk of write-in candidates that have not to my knowledge been tabulated.)

In the overall popular vote thus far, according to this Wikipedia page, Hornberger leads Supreme 22 to 10 percent, with 1996 L.P. vice presidential nominee Jo Jorgensen just behind with 9 percent.

The rolling shutdowns across the country—postponing primaries and most large gatherings—alter the basic calculus for winning delegate votes, which is usually: Show up to state conventions, glad-hand, and perform in debates. "That's when I do most of my sales, if you will," Vermin Supreme told Reason Saturday. "And conversions, and convincing the skeptical, and the questioning, and the people who don't know me other than the meme, although you would think they would by now, but it seems that's often not the case. So that is certainly affecting the campaign strategy."

The L.P.'s presidential nominating process can be a lengthy event, filled with horse-trading and intrigue. Since the goal is to win a majority of delegates on-site, and since the L.P. is a threadbare operation based on much volunteer work and self-financing, candidates have in prior cycles invested much energy into making sure friendly state delegates show up. Canceling or significantly physically altering the Austin gathering will certainly upend business as usual for America's third party.

Still, Sarwark says, "We're trying to model [responsible] behavior in our party so that the American people can see that that is the sort of leadership we would bring to the White House should they choose to not select the Hobson's choice between a malignant liar and a familiar figurehead."