Texas, Ohio Officials Use COVID-19 as an Excuse To Restrict Abortion

Plus: the pandemic in prisons, pushback on Trump's prescription for economic rebound, and more... 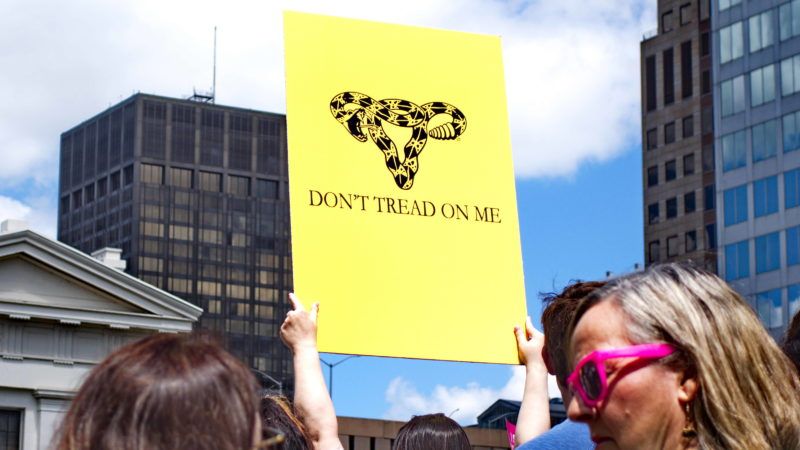 Authorities in Ohio and Texas have announced that the ban on elective surgeries due to COVID-19 will apply to surgical abortions. This would effectively ban abortions in these states for anyone more than 10 weeks pregnant. (Up to 10 weeks, non-surgical abortion is still an option.) But Ohio and Texas clinics are pushing back, setting up state health officials for major legal battles as both a pandemic and the threat of an economic recession rage on.

Last week, Ohio Republican prosecutors sent notice to three state clinics (one in Cincinnati, one in Dayton, and one in Cleveland) saying that all "nonessential" abortions must be stopped. The letter—from Attorney General Dave Yost's office—said the state health department would "take all appropriate measures" if clinics did not comply, in accordance with its March 17 order to end all "nonessential or elective surgeries and procedures." A spokesperson for Yost's office later said that this order applied to all of the state's six clinics that perform surgical abortions.

But Planned Parenthood executives from Ohio said in a statement that under the health department's order, "Planned Parenthood can still continue providing essential procedures, including surgical abortion, and our health centers continue to offer other health care services that our patients depend on. Our doors remain open for this care."

"Advocates see the latest limits on abortions as part of a long-standing political agenda, pointing to conservative Ohio lawmakers' past efforts to restrict abortions amid a wave of red-state legislation repeatedly blocked by the courts," writes The Washington Post's Hannah Knowles. "As clinics say they will proceed undeterred, the fight over what constitutes essential care in Ohio could be the first of many as more states heed the U.S. government's calls for hospitals to suspend unneeded operations," Knowles suggested Saturday night.

Right on cue, Texas jumped into the fray—and raised the stakes on Monday—with Attorney General Ken Paxton, also a Republican, issuing a statewide order that abortion procedures not necessary to save the mother's life would be banned through April 21. His office said in a statement:

"No one is exempt from the governor's executive order on medically unnecessary surgeries and procedures, including abortion providers," a statement from Paxton's office read. "Those who violate the governor's order will be met with the full force of the law."

Anyone who performs an elective surgical abortion in Texas between now and April 21 can now be sentenced to jail for 180 days or fined $1,000.

Maryland Gov. Larry Hogan, also a Republican, when asked at a Monday press conference if the state's order to halt all elective procedures applied to abortions, replied: "They've got to free up beds for the things that are needed to save people's lives."

Most surgical abortions are not performed at hospitals, however, but at outpatient settings specifically set up for abortion procedures.

"To the extent that…facilities are categorizing procedures that can be delayed during the COVID-19 pandemic, abortion should not be categorized as such a procedure," said the American College of Obstetricians and Gynecologists, the American Board of Obstetrics & Gynecology, the American Society for Reproductive Medicine, and several other health associations in a statement. "Abortion is…a time-sensitive service for which a delay of several weeks, or in some cases days, may increase the risks or potentially make it completely inaccessible."

A 60-something Phoenix, Arizona, man is dead (and his wife is sick) from consuming a fish tank cleaner that contains chloroquine, after hearing President Donald Trump say that chloroquine—a drug used to treat malaria, lupus, and rheumatoid arthritis—could also treat COVID-19. Trump was wrong in his certainty about chloroquine working on the new coronavirus; the Food and Drug Administration said the drug is just now starting to be tested for that use. However, it hardly seems Trump's fault that this couple took his statements to mean that drinking any old thing with chloroquine in it could help them. It's a tragic story, but not the major indictment of the president a lot of media organizations are making it out to be. There are plenty of real things about the COVID-19 response worth criticizing Trump and his administration for; let's stick to those.

Mass death would cripple the economy, too. As the Trump administration and its mouthpieces get more gung-ho about the idea that COVID-19 can't hurt our economy if we don't let it, some on the right (including a few current and former administration officials) are trying to interject some reality:

THREAD: There's a strong and understandable desire to return to better times and a functioning economy. But it should not be lost on anyone that there's no such thing as a functioning economy and society so long as covid-19 continues to spread uncontrolled in our biggest cities.

While vast majority of deaths from #COVID19 are age 60+ many young adults and middle aged Americans are becoming seriously ill and surviving only after prolonged hospitalizations and ICU admissions that have long term consequences. This is a dangerous virus for most age groups. pic.twitter.com/jVYWFatTDM

Here's a cost-benefit analysis of a shutdown in the US. Assuming a million lives saved, with each victim having a decade to live on average, the cost of not shutting down is equivalent to about $1.25 trillion. If you don't adjust for age it's $9 trillion. https://t.co/fyWXdNfPEk

None of the end-the-shutdown pieces I've read engage the death projections, or address what should be done instead. How would the economy sustain 10 million working adults needing near-simultaneous hospitalization while doctors are dying en masse? It just isn't addressed at all.

- Thanks Kirstie Alley
- Plugs his friend's book
- Inexplicably retweets video of Dr. Fauci mocking him
- Trump never gets it when he's the butt of the joke
- Still won't invoke Defense Production Act
- Trump is going to prison
- It's still only 9am

There is no daily White House coronavirus briefing on the schedule.

Instead Trump and the task force will do a Fox News town hall from 12-2.

Denver in 2013: Marijuana is illegal

Denver in 2020: Marijuana is essential https://t.co/NCFEWs6HOK

PLEASE READ: Conditions on Rikers are unimaginably bad. My colleague has spoken to a few people trapped inside. What they told her is horrifying. Unless @NYGovCuomo, @NYCMayor, & all DAs do something ASAP, we're looking at mass death. What they're reporting:

According to @DCCorrections , any inmate at the DC Jail who exhibits symptoms of COVID-19 will be placed in solitary confinement. pic.twitter.com/GfVJlydwbe

Thread. You're gonna see "coronavirus can live for 17 days on surfaces!" Incorrect. *Viral RNA* was detectable after 17 days. Saying that live virus is there because viral RNA was found is like saying I must be holding a meatball sub because there's a marinara stain on my pants. https://t.co/qfCKVjo2bx

A local hospital is the first across the globe to begin remotely monitoring patients who test positive for coronavirus. https://t.co/Trvf1Q0Vq8 via @MelissaReidFox8

No, this shouldn't be in the Corona Bill.

"The bill establishes a digital dollar which it defines as 'a balance expressed as a dollar value consisting of digital ledger entries that are recorded as liabilities in the accounts of any Federal Reserve Bank"https://t.co/iDnmNuC1vY