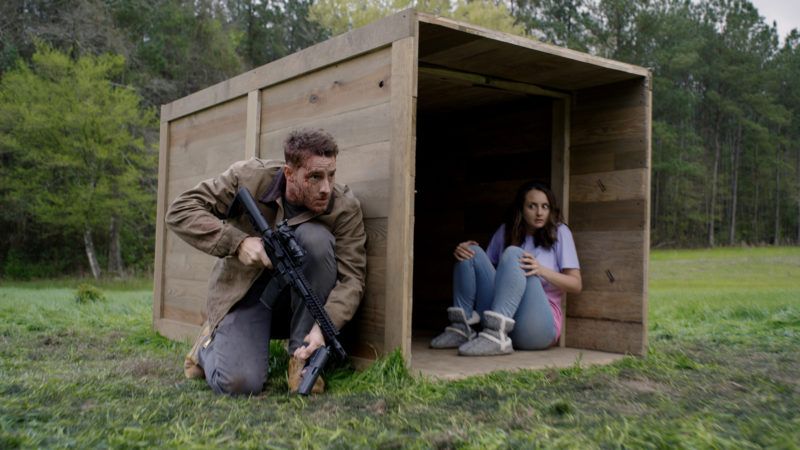 The Hunt is a movie you want to love. It's billed as a hyper-violent anti-PC satire that takes aim at both factions of our current political mess, the "Elites" and the "Deplorables." (Those are the movie's terms—progressives and right-wingers, basically.) It's a Blumhouse production, with Damon Lindelof weighing in on the script, so…well, it sounded pretty good to me.

The picture was supposed to have been released last September. But then, in August, within the space of 11 days, a pair of armed losers shot down and killed a total of 31 people in Dayton, Ohio, and El Paso, Texas. Suddenly, putting out a movie in which snotty liberals hunt down and kill their lower-class inferiors seemed unwise. So Universal pulled it.

But the trailer was already out there, and it stirred up a lot of anger among people who, of course, hadn't seen the movie. Some recent grumblings from Twitter:

"That vile movie about hunting 'Deplorables.'"

"Tasteless and disgusting and every time I see an ad for it…it makes my blood boil."

"A movie about killing Trump supporters. This has to stop."

And now here it is, all 89 minutes of it, and everybody should really settle down. The picture is sometimes funny, but it's no way as witty as it needed to be. And the determination to mock both sides of the political divide equally ("We gonna be on Hannity!" "Climate change is real!") flattens the effect. The movie might have been more entertaining if the filmmakers had gone the traditional route and picked one side to back, lobbing out bombs with no concern for "fairness." The way it's turned out, the most enjoyable thing about the movie is the wild blood-and-gutsy violence, quite a bit of which is pretty excellent.

The picture begins in a private airplane, with a group of insufferable Elites on their way to the launch of the annual Hunt. Things get good right away with the jamming of a long stiletto heel into a man's eyeball. Then we cut to a field in which about a dozen Deplorables are regaining consciousness after having been drugged and kidnapped from various parts of the country. No sooner do these folks discover a crate full of weapons nearby than all hell breaks loose—gunfire erupts, heads explode, arrows rain down. ("What is this Avatar shit," one startled Deplorable wonders.)

Several of these people manage to escape over a barbed-wire fence, and soon we meet the movie's star, Betty Gilpin (GLOW), who plays a tall blonde abductee named Crystal. Crystal is from Mississippi and has done a tour of duty in Afghanistan and is thus well-versed in the butt-kicking arts. These come in very handy when she walks into a country store and finds herself compelled to tear the place apart in a pretty memorable way. (Gilpin gets a number of showpiece scenes, all of them fiercely lively; it's too bad she's been instructed by director Craig Zobell to maintain a single dull sourpuss expression on her face throughout the movie.)

You may be wondering what this picture is actually about. I sort of still am, to be honest. There's talk of a dark Internet rumor—the one that launched the Hunt—and there's an Elite ringleader named Athena (Hilary Swank, seriously slumming), and, let's see, there's a piglet, too (on hand to provide an Orwell reference). There's also a furious woman-on-woman smackdown at the end of the movie that would be so much better if it didn't go on for so, so long. And then the picture ends, leaving you to wonder what all the months of preliminary hype and hustle were about. A very old b-movie lesson, re-learned once again.