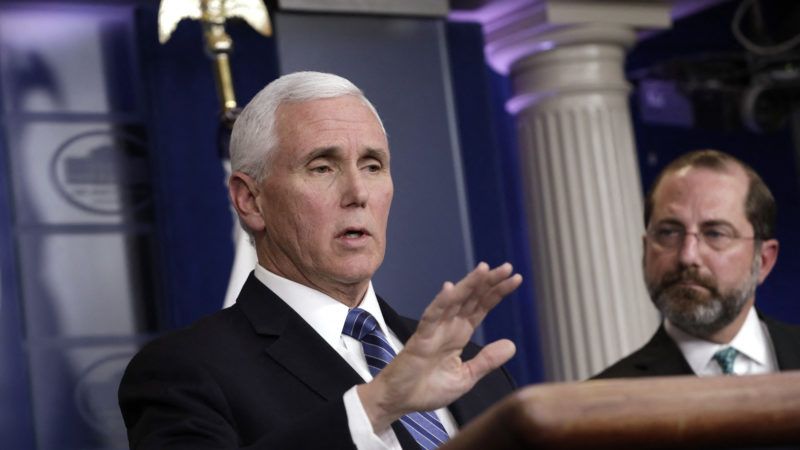 Coronavirus update: Cases of COVID-19, or coronavirus, continue to climb in the U.S., and the disease seems to pose a special risk to older adults, especially if they're in poorer health to start. But fears about coronavirus death rates are likely inflated.

The numbers: Over 100 U.S. cases of coronavirus have been confirmed now, including six cases that were fatal. The deaths all occurred in King County, Washington, including four residents at a single nursing home. Overall, 15 states have reported coronavirus cases but only Washington has so far seen fatalities.

Why it's still not time to panic: "Misleading arithmetic," as the Cato Institute's Alan Reynolds puts it:

The triangle graph [here], from a February 10 study from Imperial College London, shows that most people infected by COVID-19 are never counted as being infected. That is because, the Imperial College study explains, "the bottom of the pyramid represents the likely largest population of those infected with either mild, non‐​specific symptoms or who are asymptomatic."

As the Director General of the World Health Organization (WHO), Tedros Adhanom, explained in his February 28 briefing, "Most people will have mild disease and get better without needing any special care." Several studies have found that about 80% of all the COVID-19 cases have relatively minor symptoms which end without severe illness and therefore remain unreported.

As of yesterday, there were 89,253 confirmed cases worldwide (about 96 percent of them in Asia). Reynolds also points out that there have "been 45,393 known recoveries from COVID-19 (compared to 3,048 cumulative deaths) and, importantly, recoveries have been outnumbering new cases."

To put that in perspective:

the SARS coronavirus killed 774 people out of 8,096 known cases in 2003, which was a death rate of 9.6% before it vanished the next year. Bird flu in 1997 was predicted to be a deadly pandemic, but it killed very few people before it disappeared.

Today is International Sex Worker Rights Day (ISWRD). And this year, there's actually something to celebrate, suggests sex worker, author, and Reason contributor Maggie McNeill. "In the past two years, the tide of sex worker rights has completely turned," she writes on her blog, The Honest Courtesan. More:

The government's violent suppression of sex workers has, instead of winning more support for bigotry, instead turned a majority of Americans against the prohibitionists for the first time since such polls have been a thing; a few politicians (even at the presidential election level) have begun to recognize that sex workers and or clients are voters, and that among younger voters support for sex worker rights is as normal as support for LGBT rights was among that age cohort a generation ago.  Even "sex trafficking" hysteria has begun to backfire… Sex workers of all business models and socioeconomic levels are organizing and speaking out, and most people who aren't dyed-in-the-wool racists are finally being forced to recognize how much more severely the consequences of criminalization fall upon people of color, trans women, migrants, and other marginalized groups.  Even mainstream feminism, which has been trying to destroy sex workers since the late '80s, is beginning to fragment as more and more chapters of old-guard feminist organizations forsake the pearl-clutching harridans who pretend to speak for everyone with a vagina.

Read the rest here. And check out the #ISWRD hashtag on Twitter for information about sex work criminalization and sex worker rights activism around the world.

Federal drug warriors get grabby in Ohio. "Federal prosecutors are seeking the forfeiture of more than $356,000 from an Akron man they say made money from trafficking drugs," reports Cleveland.com. They also seized marijuana edibles, a gold Rolex watch, and $67,000 worth of jewelry. But the man, Cory Grandison, "has not been charged with a drug crime."

Grandison did plead guilty to owning a gun and some ammunition, which is prohibited since he has a felony conviction in his past. The gun charge comes with at least two and a half years in federal prison and possibly a bit over three years.

New: Tennessee legislators have advanced a bill to shrink Tennessee's draconian drug-free school zones, citing data @laurenkrisai and I put together showing that more than 25% of area within city limits in the state is within an enhanced sentencing zone https://t.co/4GesHHVlrR