A return to aerial fumigation in Colombia has some critics worried about a faltering peace. 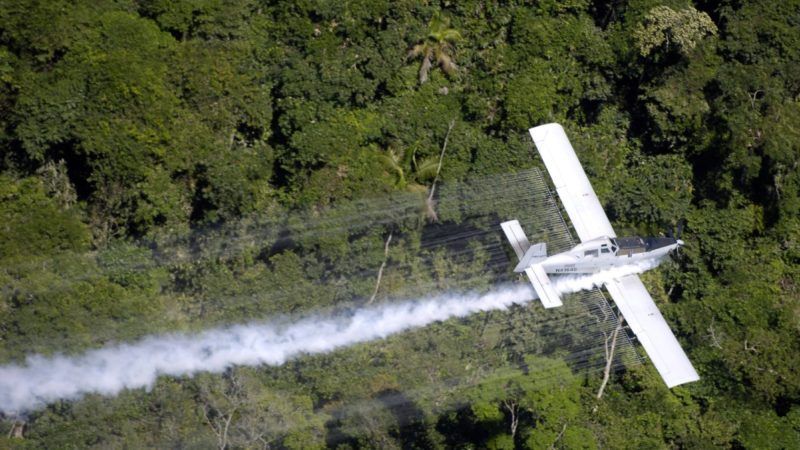 Bogota, Colombia—Colombia is about to dust off a controversial weapon from the bloodiest period of the nation's decades-long battle against cocaine production. The aerial fumigation program was halted in 2014 after the World Health Organization said the main herbicide used in fumigation, glyphosate, probably causes cancer in humans. Experts also pointed to the program's decreasing effectiveness.

Yet during this same period, Colombia produced more cocaine than at any other time in its troubled history, according to the United Nations Office on Drug and Crime (UNODC). The United States has attributed this recent rise to the halting of Colombia's aerial fumigation program in 2014.

Local counter-narcotics experts, human rights groups, environmental experts, and the UNODC, by contrast, have criticized aerial fumigation as ineffective, as a health and environmental hazard, and as a waste of money.

The Colombian Ministry of Justice announced the decision to resume aerial fumigation in December as part of an approach to "utilize every tool at the disposal of the National government to combat narco-trafficking."

The decision comes on the heels of threats last year by President Donald Trump to revoke aid to the South American nation over U.S. frustration with spiraling cocaine production. Colombia has "done nothing for us," as Trump put it. He even threatened to de-certify Colombia as a partner in the drug war, a decision that would leave America's closest ally in South America in the same category as Venezuela.

A U.S. Embassy Bogota spokesperson told Reason, "An integrated coca eradication program that uses all tools, including manual eradication, crop substitution, alternative development, and aerial eradication, offers the best chance to reduce the high cocaine production that threatens the people of both countries.

Global cocaine sales have grown since the late 1990s (after tapering off in the early 2000s) and currently account for more than $150 billion annually, according to the Organization of American States (OAS). Those gains, which dwarf the profits of any legal corporation in the world, fund armed groups, destabilize governments, and empower criminals across all of Latin America. During that same period, domestic consumption of cocaine in Colombia has quadrupled.

Colombia first began fumigation in 1994 at the insistence of the United States. Colombian drug cartels had recently begun domestically cultivating coca, which they had previously imported from Peru and Bolivia, and Colombian production was skyrocketing. The U.S. decision would prove to be a fateful one. It inspired a period of heavy U.S investment and military involvement as part of an anti-drug initiative called "Plan Colombia."

Plan Colombia would balloon over the next decade to involve direct military support and training for a Colombian government that found itself besieged not only by the after-effects of the narco-wars of the late 1980s and early 1990s, but by an ongoing civil war as well. As the issues became increasingly intertwined, the United States would find itself increasingly mired in the bloody conflict.

The U.S. transferred $10 billion in bilateral foreign assistance to the Colombian government between 2000 and 2016 to fund Plan Colombia, according to Jorge Mantilla, criminology researcher at the University of Illinois at Chicago. The U.S. also provided helicopters, planes, training, and intelligence.

After the death of Pablo Escobar, the fall of the Medellin cartel, and the subsequent collapse of the Cali cartel in the late 1990s, the cocaine industry became increasingly fractured, and the main armed actors in Colombia's ongoing civil war, right-wing paramilitary "self-defense forces" and left-wing rebel group the FARC, became major players..

According to Luis Moreno, a former U.S. narcotics affairs section director and coordinator for Plan Colombia, "The FARC were strangling [Colombia]. Our goals were threefold; deprive the rebels of their funding, drive up the price of cocaine in the U.S. while reducing its purity, and make it less available in the United States."

Data from the early 2000s seems to suggest that the coordinated efforts were initially successful, and led to a temporary plateau in Colombian cocaine production. Today, the U.S. government calls the program a success and claims that Plan Colombia set the stage for Colombia's historic 2016 Peace Accord as a weakened FARC agreed to lay down arms and join the government. Critics offer a less rosy view.

Critics call this phenomenon, which displaced millions of Colombians and led to the spread of armed groups across the country, the "Balloon Effect."

"The rate of re-plantation from forced eradication is [around] 60 percent, meaning that regarding coca production the impact of Plan Colombia couldn't be called a full success," says University of Illinois at Chicago criminology researcher Jorge Mantilla.

"The Colombian government cites the hectares of coca fields that have been destroyed, but the narcos simply pushed into new areas, and the price of cocaine has not been impacted," observes Sanchez.

She believes that while it is arguable that Plan Colombia helped foster an environment for the peace accord, "the efforts came at a horrible human price." Farmers often planted coca alongside sustenance crops, she points out, and fumigation destroyed indiscriminately, directly harming the food security of vulnerable communities who often had no choice for survival but growing coca. A critical lack of infrastructure made transporting legal crops to market next to impossible, and farmers viewed the aerial attack on coca as an attack on their communities.

Thousands of civilians were also killed during the anti-narcotics program, often at the hands of government forces. Over 3,000 farmers were slaughtered by Colombian soldiers during the conflict and later dressed up as rebels, a ploy to inflate casualty numbers.

Moreno, who headed up U.S. efforts in Colombia between 1997 and 2001, says that "we made extreme efforts to be responsible, we never followed when rebel groups fled to areas [such as] National Parkland and the protected areas of the Amazon jungle. Critics don't realize how dangerous this work was and how careful we were."

"Aerial fumigation by itself is neither efficient nor cost-effective," counters Sanchez. She believes a resumption of the program will endanger an already precarious peace.

"The people took a great risk and made heroic efforts to implement this peace," Sanchez points out, "and now they risk having their crops burned down by a government that hasn't lived up to its promises to invest in their communities."

Joshua Collins is a freelance journalist based in Bogota, Colombia.