There’s nobody to root for in this Amazon adaptation, and that’s intentional. 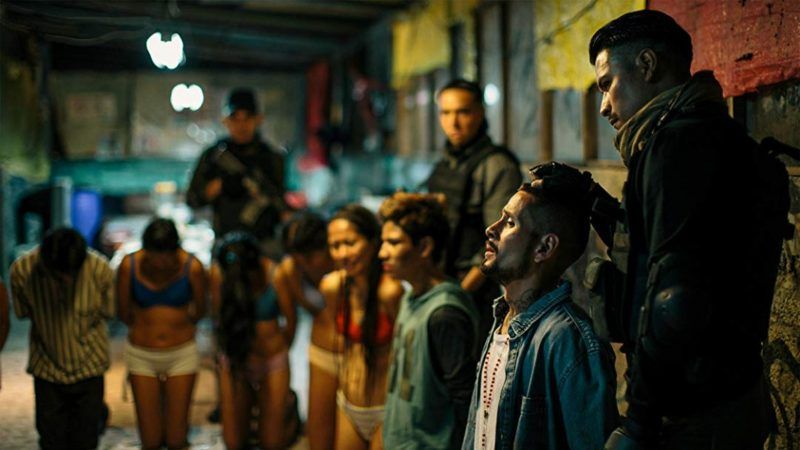 Amazon Prime's ZeroZeroZero might be the most extensive collection of narcotrafficker aphorisms ever, sort of a Red Book of the cocaine trade.

There's "Disappointment allows not for mercy," from an Italian godfather whose family disposes of its mistakes by feeding them to pigs. (And by mistakes, I do not mean impure batches of coke.) There's a self-important American deal broker who likes to say that "what we do keeps the entire worldwide economy afloat" without identifying who, exactly, plays the role of the Federal Reserve in his dope version of "too big to fail." He's also the one who explains the Narcotrafficer Code of Honor: "It doesn't mean you have to be good, just upright."

The problem with that one is that very few of the characters in ZeroZeroZero are upright for long, in any sense of the word: They're loyal only to cash flow and almost all of them end up prone, either in coffins or pigs' digestive systems.

ZeroZeroZero—the show's name is a reference to another trafficker saying, a play on the rating system for Italian baking flour, in which "zero, zero" is the top grade—is a grim, gritty and gory tale of the cocaine trade. It has none of the glamor or high-octane sexuality of Scarface or Miami Vice. The bosses mostly live not in capacious art-deco palaces but in drab fortifications; they wear not Armani but body armor; they spend their spare time not nuzzling supermodels but in paranoid contemplation of who might be plotting against them.

Correction: The word "paranoid" is not appropriate, for these enemies are all too real. The central motif of Zero is betrayal. Every character is machinating against every other, or soon will be; neither blood nor money ensures loyalty. Both the traffickers and the cops who hunt them are soulless. Zero is a riveting program, but only because the plot is sociopathically intense; there's nobody to root for, or even against. Every time you think you've identified the character who's the absolute bottom-dwelling dregs of the bunch, the plot will twist toward even more depravity.

Based on the 2013 novel of the same name by Italian journalist Robert Saviano, Zero is the story of the damage wrought by a single shipment of 5,000 kilos of cocaine that impels three sets of characters on a collision course. The cocaine has been ordered by a craggy old Calabrian mafioso known as Don Minu (Italian actor Adriamo Chiaramida), who has emerged from a secret fortified cave after the end of a gang war and wants to get back into the game. But the payment for the drugs is hijacked by his grandson Stefano (newcomer Giuseppe De Domenico), seeking vengeance for an old family feud and not at all averse to getting rich in the process.

The missing money creates headaches, the .38-caliber kind, for the Lynwoods, the New Orleans shipping family that brokered the cocaine deal between the Italians and the Mexican producers of the drug. Patriarch Edward (Gabriel Byrne) wants to stay in the cocaine business because a single load brings in as much as his legal shipping business nets in a year. His daughter and second-in-command Emma (Andrea Riseborough, Black Mirror) argues that the Lynwoods have no experience with the hardball part of the business and would be better off getting out. Son Chris (Dane DeHaan, True Blood) has been systematically excluded from the drug operations because the family fears the stress will trigger the crippling Huntington's disease gene he inherited from his mother, but he knows a lot more than anybody's aware.

The final side of this triangle is a squadron of Mexican anti-drug police whose skill with torturing informants and planting wiretaps has enabled the cops to listen in on the negotiations over the drugs and missing money. Sergeant Manuel Contreras (Harold Torres, El Chapo), the leader of the squad, is a man of intense religious faith, but as might be guessed from his nickname—Vampiro—its theology is of uncertain direction.

The multinational team of writers and directors, including Saviano himself, that produced Zero have employed an elliptical form of story-telling that often circles back onto itself—particulary in the early episodes, when the various collections of characters haven't encountered one another yet. But they pull it off much better than you might expect, and Zero is far easier to follow than any number of flashback-driven U.S. shows on the air at the moment.

Their tightly drawn approach to the screenplay does not allow the cast any scenery-chewing theatrics or peak emotional moment, but all of the actors are quite adept at projecting a taut air of menace and, occasionally, fear. Not since The Wire has a TV series more explicitly portrayed the corruption and violence that the war on drugs visits on both its players and its bystanders. "Certain things, among decent people, should never happen," one of Zero's narcotraffickers muses to another. Oh, but they do, over and over.