Can a City Refuse To Use a Foster Agency That Discriminates Against Same-Sex Couples?

The Supreme Court is about to tackle the issue. 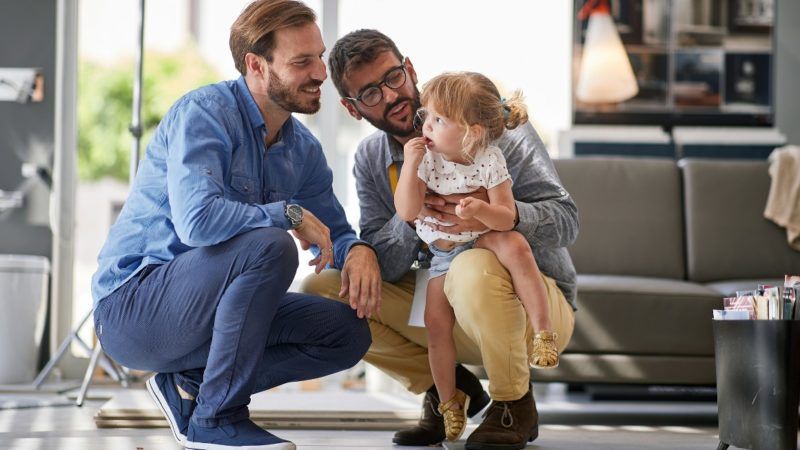 Can governments refuse to use religious foster and adoption agencies that won't place children with same-sex couples? The issue will soon come before the Supreme Court.

This morning the Supreme Court announced that it would hear Fulton v. City of Philadelphia. The case centers around how Philadelphia applies its antidiscrimination policies to Catholic Social Services (CSS), with whom the city contracts for a number of child welfare programs. CSS objects to same-sex marriages for religious reasons and declines to put children with such couples.

This puts it at odds with Philadelphia's antidiscrimination ordinances, and so the city stopped referring children to the group for foster care placement. CSS and some foster parents it represents filed suit in 2018, arguing that the group is exercising its religious rights by declining to accept gay couples as caretakers. They want their contract reinstated.

The city resisted, arguing that religious exemptions don't apply here because the antidiscrimination laws are being neutrally enforced and aren't based on any sort of anti-Catholic animosity. So far the courts have agreed with the city.

Conflicts like this are playing out in several cities and states across the country. Some places, such as Philadelphia, are refusing to let adoption or foster care agencies discriminate against gay couples. But some states, such as Tennessee and Michigan, have passed laws to let private agencies turn away potential parents whose religious beliefs don't match theirs (not just on same-sex issues).

The most important Supreme Court precedent here may be 1990's Employment Division v. Smith. That case, about two men fired from their jobs and denied unemployment for using peyote, held that people can't use their freedom of religious expression to demand exemption from neutrally applied laws that satisfy a "compelling government interest." (Traditional libertarian disclaimer: In a libertarian universe, stopping people from taking hallucinogenic mushrooms would fail the "compelling government interest" test. But that's not the current universe.)

This Supreme Court challenge explicitly argues that the Employment Division v. Smith precedent should be revisited. If there's a remote chance of that happening, we'll see a lot of public worrying about whether the conservatives of the Supreme Court will enshrine what folks like the American Civil Liberties Union call a "license to discriminate."

I'm skeptical that the court would rule that broadly, but we'll see. When the Supreme Court addressed whether a Colorado bakery could refuse to provide a wedding cake for a same-sex couple in Masterpiece Cakeshop v. Colorado Civil Rights Commission, the court elegantly sidestepped the thorny central question of when exemptions should be allowed by determining that Colorado was not neutrally applying its antidiscrimination laws and that there was clear evidence of anti-religious bias in how the bakery was treated.

Philadelphia insists that that's not the case here. The city notes in its brief to the Supreme Court that it is continuing to contract with CSS in other areas. Thus, it's only keeping the group from participating in the foster care program and only because it is violating the city's antidiscrimination rules.

The justices could simply rule that Philadelphia is indeed neutrally applying the law. If that's all they do, they won't overturn the laws passed in those other states that do offer exemptions to agencies that don't want to place kids with same-sex couples.

For a useful libertarian perspective on this conflict, I recommend Walter Olson, a Cato Institute senior fellow, Reason contributor, and gay man in a same-sex relationship who has adopted a son. Taking a broad view, Olson notes that children and adults in the adoption and foster care system benefit when there is a wide "marketplace" where qualifying agencies aren't shut out of the system when it's not necessary. If the goal is to help connect more children with families to care for them, shutting out religious agencies doesn't necessarily help achieve that goal, even if those agencies are discriminating. What matters is the existence of meaningful alternative options; there are downsides when religious groups are denied participation, and downsides when religious organizations are the only choices in an area. Olson offers his argument here. SCOTUSblog has a page devoted to Fulton v. City of Philadelphia here.