There's Nothing Special About Iowa. Time To Let Other States Vote First.

Letting any single state go first is a mistake. But a national primary would be problematic too. Luckily, those aren't the only two options. 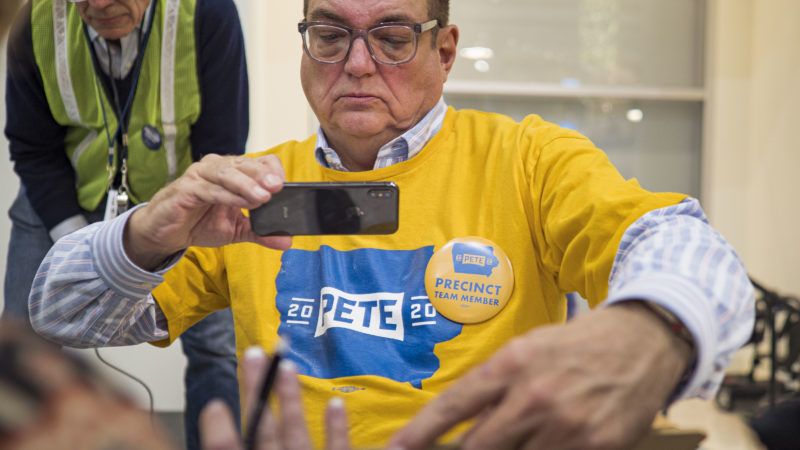 Surely we can do better than this.

Last night's Iowa caucuses were a total disaster. Candidates spent millions of dollars, volunteers canvassed for months, and the media spilled untold amounts of ink, pixels, and TV time building up to the first nominating contest in the 2020 Democratic primary—but it was all for naught, as the Iowa Democratic Party totally fumbled the one event that puts the state on the political map. Someone will eventually be declared the winner, but it will hardly matter by then. Campaigns have moved on to New Hampshire, and the news cycle will quickly move on to tonight's State of the Union address and the next primary contests. Any bounce (or lack thereof) coming out of Iowa has been rendered meaningless.

Already, the mess is prompting calls for the Democratic Party to abandon the caucus format in Iowa, or to replace Iowa as the first state to vote, or both. (For more on all that, read Reason Features Editor Peter Suderman's obituary for the Iowa caucuses here.)

But that prompts an obvious follow-up question. If Iowa doesn't go first, which state (or states) should?

The two most common answers to this question—either that the first state to vote should be demographically representative of the country as a whole, or that we should move to a national primary that does not elevate any state above the rest—are both wrong. In each case, those changes would merely replace the problems caused by the Iowa caucuses with a different set of biases. Iowa (and New Hampshire) ought to be replaced as the "first-in-the-nation" caucuses and primaries, it's true, but both major parties should take this opportunity to implement a system that voters can trust to be fair to all candidates.

To understand why replacing Iowa with another state won't work, you have to understand the arguments against having Iowa vote first. These aren't new, even though they will get renewed attention after Monday's mess. In a nutshell, the argument goes like this: Iowa is too white and too rural to be an accurate microcosm of the country as a whole, and letting it go first every four years is unfair to candidates whose appeal might be greater in states that more accurately reflect America. The demographics are indeed striking. Iowa's population is 90 percent white, while the country as a whole is 61 percent white.

Julian Castro, the former mayor of San Antonio, has pinned at least some of the blame for his failed presidential campaign on the demographics of Iowa (and New Hampshire, the first primary state, which is also 90 percent white). "We can't as a Democratic Party, continually and justifiably complain about Republicans who suppress the vote of people of color, and then turn around and start our nominating contest in two states, that even though they take their role seriously, hardly have any people of color," Castro said in November.

But that identity-based critique must grapple with the fact that Barack Obama in 2008 scored a surprise upset over Hillary Clinton in Iowa—a victory that propelled Obama to the nomination and the presidency. Ironically, Clinton may have been better off in 2008 if the first state to vote was a more diverse, traditionally blue "state" where the Democratic Party establishment held more sway.

The problem, then, isn't that Iowa unfairly penalizes certain candidates. It's that giving any state the power to vote first creates a set of biases that affect the rest of the race.

That's not solved by letting another state jump to the front of the line. Sure, California has the most registered Democrats. Illinois is the state that, demographically, best matches the Democratic Party's national profile. Ohio is the swingiest swing state and a longtime political barometer. But having a big state—like California or Ohio—go first would grant a huge home field advantage to certain candidates. And would anyone in their right mind trust Chicago Democrats to handle the crucial first primary without controversy?

So why not try the opposite approach? If no single state should go first, make all of them vote at the same time. The idea to hold a "national primary" has been around for more than a century, and it probably never made more sense than it does now—since candidates can take advantage of technology to be in many places at once.

A national primary, however, comes with its own set of biases—ones that would boost wealthy candidates, like former New York City Mayor Michael Bloomberg. One of the major benefits of the current, state-by-state format is that it tests would-be presidential campaigns in a variety of ways—you have to win with small-scale retail politics in Iowa and New Hampshire, sell a national message on Super Tuesday, and identify where and when to invest resources without wasting them on states that can't be won. Campaigns that navigate that gauntlet successfully are, in theory, the best poised to win a general election. A national primary might elevate campaigns that can saturate the airwaves from coast-to-coast, but would make other campaign infrastructure less important.

There's probably no perfect way to structure a primary election, but the best ideas strike a balance between giving one or two states too much influence while still forcing winning candidates to navigate a geographically and demographically diverse process.

As recently as 2008, the Republican National Committee was considering exactly such a plan. Known as the "Delaware Plan," this reform was floated at the 2000 and 2008 national conventions. It would have sorted the states by population into four groups. The smallest states, by population, would share a single primary election day, followed by a second election for the next largest states, and so on.

Letting the least populated states vote first would preserve the traditional retail politics of Iowa and New Hampshire, but would create a playing field that stretches from Maine to Alaska. Only candidates who survived those early tests would be able to compete for the big prizes in the final round of the process, when states like California and Texas would have their say. A variation on the Delaware Plan, known as the Ohio Plan, would also have small states voting in the first cluster, but would mix the subsequent clusters so the largest states by population didn't always have to wait to go last.

There are still some explicit biases in letting some states go first every time, and—as proposed to the RNC in 2008, at least—the Delaware Plan would preserve Iowa's and New Hampshire's first-in-the-nation status.

Still, that's a step in the right direction. Clustering states into a series of primaries so that, for example, 10 states vote at a time in five sets of elections with each election separated by a month, would prevent any one outcome (or any one major screw-up) from defining the first step in the nominating process. It would also create a more dynamic competition by forcing campaigns to make strategic choices—instead of spending months focused on Iowa and New Hampshire, candidates would have to put their chips in a variety of places for the first round of voting.

The process could be made even more fair if the clusters of states are chosen by lottery. That was the basis of a bipartisan idea pitched by Debbie Dingell, the wife of late Democratic Michigan congressman John Dingell, and Saul Anuzis, then-chairman of the Michigan GOP.

It's complicated, sure, but no more complicated than the current process. It would provide a different, randomized map for each primary season—forcing campaigns to adapt their opening messages for an audience that's bigger than a mere 240,000 voters in Iowa cycle after cycle.

The only real drawback to a major reform like one of these is that it would have to be imposed from the top down. The DNC or RNC would have to do some serious arm-twisting to get states like Iowa, New Hampshire, and South Carolina to agree to a system in which they lose their primo spots—and one in which they might end up being among the final states to vote. It would require overriding the state parties to a degree that might make the national committees (and should make libertarian-minded people) a little uncomfortable.

And these reforms would do nothing to fix the real problem at the heart of America's presidential election system: that the winner is given too much power—an outcome that raises the stakes of any procedural tinkering far higher than they should be.

It's unlikely that there's any flawless presidential primary system. Still, last night's debacle in Iowa should stoke a real conversation about creating a more sensible and fair nominating process before 2024.