Dems Want to Run the Country, but They Can't Even Run an Election in Iowa

Plus: What is the Shadow app? And are the Iowa caucuses dead? 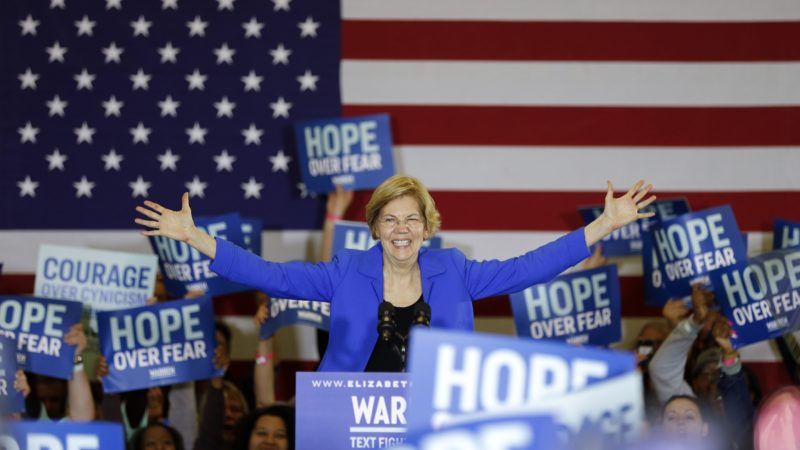 No one knows which Democrat took top place in Iowa due to flawed new systems implemented by state party officials for the presidential caucuses yesterday. In addition to instituting complicated new caucus rules, Iowa Democrats also had precincts report final results using a new app that no one could figure out.

Supporters of other Democratic candidates have been accusing the South Bend, Indiana mayor of trickery—#MayorCheat is currently trending on Twitter—after it was reported that Buttigieg had made payments to Shadow, the company behind the broken app.

Shadow was launched by progressive organization ACRONYM, and has worked with multiple campaigns (including Joe Biden's). In announcing Shadow last year, founder and CEO Tara McGowan complained about how 2016 election tech got buzz but with "little attention or resources paid to how these tools would be integrated." She promised Shadow would be different.

"With Shadow, we're building a new model," McGowan tweeted in 2019, stressing the company's "deep focus on" helping Democrats "use the most effective new tools in smarter ways."

That hasn't gone so hot, judging by the ruckus out of Iowa. As of this morning, Buttigieg's statement suggesting he won still stood while Sen. Elizabeth Warren's (D–Mass.) campaign was claiming she's in a three-way tie for winner Buttigieg and Sen. Bernie Sanders (I–Vt.). Many are predicting this is the end of the Iowa caucuses' importance as a bellwether for campaigns.

Iowa county Democratic party chairman to me on the future of the caucuses:

"There were 49 other states saying why does Iowa get to do this?… And now we just poured a gallon on kerosene on what was a shouldering ember."

Iowa Democrats had promised a better, more efficient tallying of voter results via Shadow. Instead, it's turned into a prime case of technocratic progressive promises that don't deliver.

Plenty of people reported concerns about the app before voting opened in Iowa on Monday.

According to NPR reporter Miles Parks, Iowa precinct leaders had their doubts. "One caucus organizer told me that of the 57 precincts he was overseeing, 'about 20' were having some sort of issue with the app before caucusing even began," Parks tweeted early this morning.

I wasn't told an exact number but "at least a dozen" was tossed out there.

There are more than 1,600 precinct leaders who need to transmit results.

"The caucus workers will use the app on their personal smartphones, which [University of Iowa computer science professor Douglas] Jones said could be vulnerable," cautioned The Wall Street Journal on January 26.

Iowa Democratic Party Chairman Troy Price told the paper then: "We are confident in the security systems we have in place."

To be clear, security concerns don't seem to be the issue; officials aren't suggesting the app was tampered with, nor that any underlying voting data was compromised.

These conspiracy theories are so nuts. A major problem with the caucuses is that there's *no secret ballot*. The results of many precincts are on twitter. There's room for lots of temporary chaos and incompetence, but not really for much deceit.

If it comes down to it, Iowa caucus officials can manually count and then verbally report voting results (which some are now doing). And state leaders can trace everything and double-check their math if need be. It just takes a lot longer, hence the delay on knowing who really won in Iowa.

Overall, issues seem to be mainly of the mundane user-error and bad-bureaucratic-planning variety.

I know the developers behind the app are getting the brunt of the blame this morning, but I haven't seen any reports of a technical failure. It appears that "user error" is mostly to blame which indicates the state party didn't deploy it properly with training etc.

Still, this hasn't stopped conspiracy theories about Buttigieg, Russians, and other alleged app-sabotaging culprits from popping up.

Amusingly, a lot of powerful Democrats have been scrambling to blame this on anyone but their own side. For instance, Andrew Yang chalked it up, in part, to a lack of technological prowess by the president.

It might be helpful to have a President and government that understand technology so this sort of thing doesn't happen.

Julián Castro called it a failure of some amorphous system to protect democracy:

This is a total mess. I respect the people of Iowa, they've been great—but it's become very clear that our democracy has been misserved by a broken system. #IACaucus

The whole mess has created room for not only more intra-Democratic mudslinging but also accusations by Republicans that their opponents' electoral process is rigged.

For his part, President Donald Trump chalked it up to ineptitude:

The Democrat Caucus is an unmitigated disaster. Nothing works, just like they ran the Country. Remember the 5 Billion Dollar Obamacare Website, that should have cost 2% of that. The only person that can claim a very big victory in Iowa last night is "Trump".

On the other side of the political spectrum, left-leaning Democrats are sounding just like Republicans, pointing fingers at their party's establishment and arguing over whether bias or merely bad decisions are at play.

What all but the most partisan Democrats seem to agree is that the most moderate and charitable interpretation here is gross incompetence.

This morning, the Iowa Democratic Party said in a statement that "while the app was recording data accurately, it was reporting out only partial data. We have determined that this was due to a coding issue in the reporting system." It said the "plan is to release results as soon as possible today."