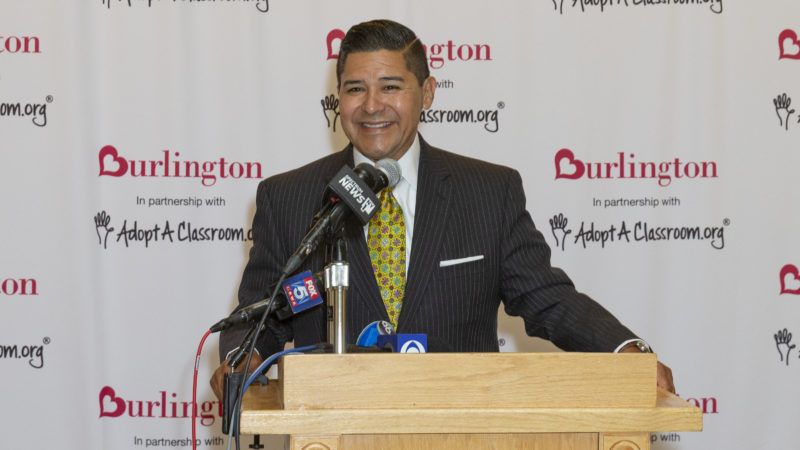 In September 2019, I wrote a long Reason feature about how New York City politicians and education bureaucrats, particularly Department of Education (DOE) Chancellor Richard Carranza, were pushing through their preferred policy changes in part by weaponizing charges of "racism" against opponents, skeptics, and parents. So what's Carranza been up to since then?

Weaponizing charges of "racism" against opponents, skeptics, and parents!

The kerfuffle currently making local headlines concerns a raucous Jan. 16 Community Education Council meeting in Queens that Carranza cut short after being booed and yelled at by parents of middle-schoolers who had been assaulted on campus. Critics contend that Carranza's new "restorative justice" approach to discipline is leaving violent perpetrators unpunished.

Italics mine, to emphasize the next phase of the controversy. "How can you say a parent is grandstanding when their child has been sexually harassed and assaulted?" NYC Parents Union President Mona Davids told the New York Post, which has been calling for the chancellor to be fired. "I empathize with the anger and frustration of parents and families when they're not being heard," added City Councilman Mark Treyger from Queens.

Nine City Council members last June called on Mayor Bill de Blasio to fire Carranza unless the chancellor cuts back on his "divisive rhetoric," so you might think that the embattled educrat would choose his next words carefully. If so, his ensuing choice speaks volumes about Carranza's judgment, or the tilt of the intended audience, or both.

At a press conference with Mayor de Blasio Tuesday, the chancellor called the Queens meeting a "setup," claiming that protesters were "brought in vans to agitate" from outside the district, and then accused his critics of being "racist."

"This is about some voices in the community that don't like me," he said. "Just look at the abject racist things that are said about me: 'Go back where I came from,' 'taco-eating Carranza,' 'fire Carranza Ai Yi Yi,' with the exclamation points in Spanish. Absolutely, they're racist."

Faced with pushback from Rep. Grace Meng (D–N.Y.)—"please don't accuse [parents] of pretending or grandstanding," Meng tweeted. "They are hurt and deserve to be treated with compassion"—Carranza clapped back: "No. Enough," he tweeted. "No more politics."

N.Y. State Senator John Liu (D), chair of the Senate's New York City Education Committee, also was not impressed. "Chancellor Carranza's comments today displayed at best lack of judgment and at worst woeful disregard for parent concerns," Liu said in a statement. "It's disturbing that he would marginalize the voices of hundreds of parents at an education town hall meeting by characterizing the meeting as a 'set up' and fixating on some participants as 'outside agitators.'"

What about Bill de Blasio? "This is just unfair," the mayor said in Carranza's defense. "Some people have it out for the chancellor because he is ideologically different than them and because he is trying to shake things up." Last June, de Blasio spokeswoman Freddi Goldstein called the lawmaker criticism of Carranza a "racially charged smear campaign."

It's worth noting, as CBS New York did this week, that six of the nine previous New York City school chancellors have been either Latino or African-American. Provided anonymity, those former chancellors have such advice for Carranza as "Put on your big boy pants," and "Playing the race card is [expletive], a cop-out."

As I argue in a video today, and in that September piece, the idiosyncratic politics of New York are sadly not contained within the boundaries of the five boroughs. Not only are gifted and talented programs being shuttered around the country in the name of addressing racial disparities, but those who object to policy changes that are adopted in the name of "desegregation" are also commonly accused of, at the very least, perpetuating an unjust system anchored in racism.

For those parents unaccustomed to being in the public eye, the prospect of getting labeled a racist even by random people on social media, let alone powerful government officials, is an effective deterrent to public participation. The provision of education is challenging enough—due in no small part to the very real history of racism both in the country as a whole and particularly within the development of the K-12 system—that discouraging entire categories of parental involvement is unlikely to produce either wise policy or widespread participation. By so freely denigrating his ostensible customers, Richard Carranza is sowing discord and planting the seeds for his own eventual failure.