This Is the Executive War-Making the Founders Tried To Prevent

The framers of the Constitution were quite right that wars should be difficult to start and easy to end. 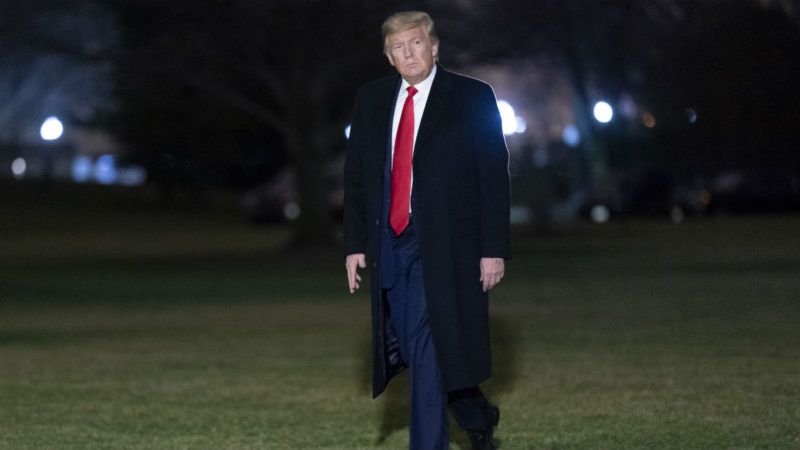 "On the Iraq War Resolution being voted on tomorrow in the House of Represenatives [sic]," President Trump tweeted Wednesday, "we are down to 5000 soldiers, and going down, and I want everyone, Republican and Democrat, to vote their HEART!"

Trump's apparent willingness for Congress to rescind the 2002 Authorization for Use of Military Force (AUMF) in Iraq is a curious addition to his administration's often contradictory foreign policy. Two weeks ago, the expectation was that he'd veto a war powers resolution Sen. Tim Kaine (Va.) introduced to require obtain congressional authorization for any war with Iran. And a week before that, the administration told Congress the Iraq AUMF—the very measure about which Trump now invites lawmakers to vote their heart—provided legal cover for the strike on Iranian Gen. Qassem Soleimani.

Precisely because of creative uses like that, ending the Iraq AUMF is overdue. But it won't address our broader problem of unaccountable executive war-making. It won't block the false claims of "imminence" that—as we saw in the jumbled justifications for the Soleimani hit—are the means by which that war-making will continue.

Imminence matters because of how foreign policy prerogatives are split between the president and Congress. The framers of our Constitution were chiefly interested in limiting the authority of the executive, but neither did they wish to leave the United States undefended against attack.

To satisfy the first concern, war powers are vested in the legislature. "There is a material difference between the cases of making war, and making peace," James Madison recorded Oliver Ellsworth saying at the Constitutional Convention. "It should be more easy [sic] to get out of a war, than into it," he advised. George Mason agreed, arguing that the president is not to be trusted with authority to initiate military action, and that the precision of "declare war" is preferable to "make war" as a means of "clogging rather than facilitating" the march toward conflict.

The president's role as commander-in-chief, then, has two components. One is to conduct a war once duly underway. The other, as Madison's convention notes likewise indicate, is the power to "repel sudden attacks," to "repel [but] not to commence war." The president may not attack on his own authority, but if the United States is attacked, the president doesn't have to wait for congressional permission to respond.

But what if an attack is imminent? It hasn't happened yet, but it will unless urgent action is taken. Perhaps a missile hasn't struck, but we know it's incoming. The Constitution doesn't explicitly address imminent attacks, but the defense exception to its assignment of war powers has traditionally included such cases.

There's no single, authoritative legal definition for imminence—the Trump administration, for example, is not bound by the test of imminence the Obama administration's legal advisors preferred, which included factors like "the nature and immediacy of the threat; the probability of an attack; whether the anticipated attack is part of a concerted pattern of continuing armed activity," and more. That uncertainty provides any president who wants to bypass Congress on foreign policy decisions a loophole big enough for a whole war (or two or three). By invoking an "imminent" threat, the president is functionally able to go to war unilaterally, ignoring Congress altogether. This is a fig leaf that allows Congress to avoid difficult votes of war and peace.

That risk is exactly the problem with the administration's changing stories about the killing of Soleimani. "The Fake News Media and their Democrat Partners are working hard to determine whether or not the future attack by terrorist Soleimani was 'imminent' or not, & was my team in agreement," Trump tweeted after his team's evolving explanations for the strike came under scrutiny. "The answer to both is a strong YES., but it doesn't really matter because of his horrible past!"

It does matter. If Trump is wrong in his claim that Soleimani had a truly imminent attack underway—and comments from Secretary of State Mike Pompeo as well as legislators briefed by the administration have cast major doubt on that narrative under any normal understanding of imminence—the assassination was illegal. Not just illegal in the ordinary sense. Unconstitutional. An executive usurpation of legislative authority.

Rule of law and constitutional constraints matter far beyond this immediate situation, beyond what we may think of Soleimani, Trump, or the prospect of war with Iran. Indeed, the Soleimani strike is only the most recent example. Presidents have long ordered extra-constitutional military action, and Congress has so far refused to stop them.

It matters because the framers of the Constitution were quite right that wars should be difficult to start and easy to end. They were right that a single person who could lead a whole nation into war would often do so, that the bellicose habits of the kings of old Europe must not be replicated in the United States. They were right that Congress—sluggish and querulous and by design closer to the mood of the nation it represents than one individual president can ever be—would be slower to rush into reckless military intervention than an autonomous commander in chief.

They were right, in short, to fear exactly the dangerous system of executive war-making we have today.