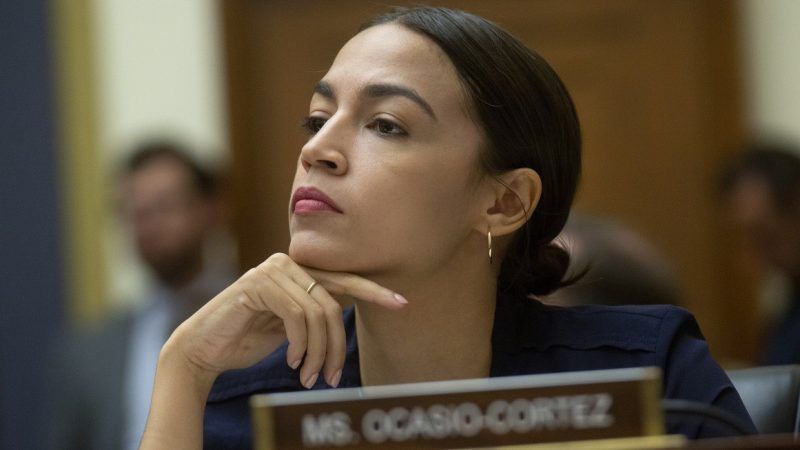 When Coates pressed Ocasio-Cortez on whether billionaire entrepreneurs deserve to keep their money, she responded, "Well you didn't make those widgets, did you?…You sat on a couch while thousands of people were paid modern-day slave wages—and in some cases, real modern-day slavery, depending on where you are in terms of food production."

Later, she turned her attention to Amazon founder Jeff Bezos, suggesting that "if Jeff Bezos wants to be a good person, he'd turn Amazon into a worker cooperative."

Suggestions like that are more interesting than her philosophical insistence that no one deserves to be rich because anyone, anywhere has to work in order to eat. But it's unlikely to work for a company of Amazon's size. As John McClaughry wrote in a 1985 issue of Reason:

An unstructured participatory workplace can cause problems of severe emotional intensity. Jane Mansbridge reports the prevalence of rage, tears, splitting headaches, and other real stress afflictions when workers or citizens are suddenly cast into an unstructured decisionmaking forum. The appearance of one or more tyrants, bent on dominating the group, also seems almost inevitable. Implementing workplace democracy is hard enough when everyone involved comes from a common cultural, ethnic, racial, or political background. Where the membership is heterogeneous, success can be close to impossible.

Speaking of Amazon: As of 2015, the company claimed to have more than 300 million active user accounts. Amazon Prime ended 2019 with more than 112 million users worldwide, an estimated 90 to 95 million of them based in the U.S., which tells us that nearly a third of American residents find Amazon Prime valuable enough to shell out roughly $100 annually for the service.

A vast pool of people are willing to pay for Prime memberships for the convenience of having Amazon products delivered to their door in two days flat; a massive library of on-demand music, TV, and movies; and other conveniences.

What is the correct reward (to borrow Ocasio-Cortez's framing) for the person who creates something that millions of people want badly enough to pay for it? Does that reward scale up based on the number of paying users? Should it be decided democratically (and who should we trust to make such a call)? Would the reward scale for entrepreneurial success be adjustable for inflation? What about the entrepreneur who invests his allotted reward? What about the entrepreneurs who lose money?

The process of determining by fiat who gets what sounds like it might be more difficult than Ocasio-Cortez implies. Luckily, markets do that for us.

Profit is a tremendous part of what inspires people to innovate. Why build new tech products or household appliances or lab-grown meat substitutes if you're not going to be rewarded for your endeavor? "It is not from the benevolence of the butcher, the brewer, or the baker that we expect our dinner," goes the old Adam Smith quote, "but from their regard to their own self-interest."

The development of new vaccines, the aforementioned pursuit of meat substitutes which will prevent animal slaughter and all kinds of environmental havoc, aren't motivated solely by altruism. The technologies that will make those innovations possible were also not developed for free. Markets play matchmaker between people with ideas, people with resources, and people who can use the latter to realize the former. Central planners like Ocasio-Cortez toying with the levers to determine who makes what amount of profit might even prevent future Amazons from existing at all.

Ocasio-Cortez is right to be concerned with working conditions for those at the bottom of the income distribution latter, and for would-be competitors who are sabotaged by the union of big business and big government. Undocumented immigrants do have to settle for less because they can't work here legally. Then again, the fact that they can work in the U.S. at all—making less than native-born workers but more than they would in their country of origin—is possible thanks to markets.

She's also correct that Amazon succeeds at rent-seeking and cozying up to politicians in order to be the beneficiary of all kinds of political favors. When Amazon announced it was seeking a location for its second headquarters, governments engaged in a subsidy bidding war at taxpayers' expense. Shame on Amazon, as well as the many politicians who think it permissible to dole out money to companies like Amazon. But does Ocasio-Cortez honestly believe we'd see less of that if the government had even more power to choose which companies win and lose?

Amazon, at its best, despite its many flaws, is the product of what's best about capitalism: It enables millions of people to have access to consumer goods more cheaply than before, and it provides consensual work opportunities for people who want them. The company could be better, but Ocasio-Cortez and bigger government are unlikely to beat the market.