An unnecessary and personal attack on Bernie Sanders is another example of Clinton's poor political judgement, and smacks of Democratic desperation to stop the Vermont senator's rise. 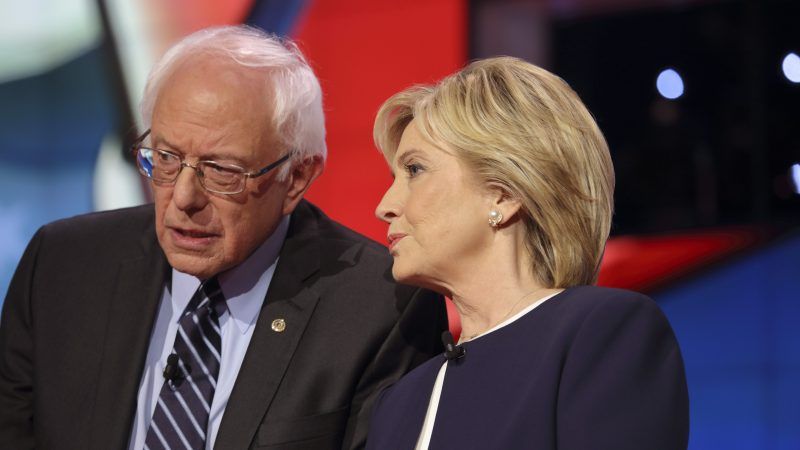 In aiming a series of personal attacks at Sen. Bernie Sanders (I–Vt.) and his supporters, Hillary Clinton achieved little more than once again demonstrating her own poor political instincts and lingering bitterness over her 2016 electoral loss.

Clinton, in an interview with The Hollywood Reporter to promote an upcoming Hulu documentary about her career in politics, blasted Sanders and his supporters for what she called "relentless attacks on lots of his competitors, particularly the women." She also declined to answer whether she would support Sanders were he to win the 2020 Democratic nomination.

In the documentary itself, Clinton went after Sanders in an even more personal way, saying "nobody likes him, nobody wants to work with him, he got nothing done," while also characterizing Sanders' decades-long career in the Senate as "just baloney." Asked by The Hollywood Reporter if she stands by that assessment, Clinton said she does.

The comments are bound to make waves in the Democratic primary, just weeks before the first votes are cast in Iowa. Sanders' recent rise in the polls has sent some mainstream Democrats into a tizzy. Meanwhile, the Vermont senator is fending off an attack from Sen. Elizabeth Warren (D–Mass.), who has accused Sanders of telling her privately that a woman could not win the presidency. Sanders has denied making that claim.

Me too, says Clinton.

"This argument about whether or not or when he did or didn't say that a woman couldn't be elected, it's part of a pattern," Clinton told The Hollywood Reporter. "If it were a one-off, you might say, 'OK, fine.' But he said I was unqualified. I had a lot more experience than he did, and got a lot more done than he had, but that was his attack on me."

That's a huge mischaracterization of Sanders' own attack on Clinton during the heated 2016 primaries. Sanders did explicitly question whether Clinton was qualified to be president—after she had aimed similar attacks at him—but Sanders' critique of Clinton's record was based on policy, not gender.

Here's how Sanders put it in April 2016, just prior to the crucial New York primary that effectively sealed the nomination for Clinton:

"My response is if you want to question my qualifications, then maybe the American people might wonder about your qualifications Madame Secretary," he said.

Sanders added: "When you voted for the war in Iraq, the most disastrous foreign policy blunder in the history of America, you might want to question your qualifications. When you voted for trade agreements that cost millions of Americans decent paying jobs, and the American people might want to wonder about your qualifications. When you're spending an enormous amount of time raising money for your super PAC from some of the wealthiest people in this country, and from some of the most outrageous special interests … Are you qualified to be president of the United States when you're raising millions of dollars from Wall Street whose greed and recklessness helped destroy our economy?"

Whether you agree with Sanders on that list of policies or not, there's no denying that he was making a substantive argument about Clinton's record—not suggesting that a woman is unqualified for office merely because she is a woman. Indeed, there are many reasons to believe Clinton would have been a bad president, and none of them have to do with her gender—just as there are many reasons to believe Sanders would be a bad president, regardless of his.

Clinton's most recent attack on Sanders' mirrors claims she's made before, most notably in her 2017 book, What Happened. In it, she accused Sanders of "impugning my character" during the 2016 primaries, and said that Sanders' criticisms contributed to her general election defeat to President Donald Trump.

But by refusing to say whether she will endorse Sanders should he clinch the nomination, Clinton is effectively doing what she accuses Sanders' own supporters of doing to her in 2016: refusing to be team players and support the eventual nominee. She knows better than most how that kind of thinking can damage the eventual Democratic pick—regardless of who it is—and yet she's encouraging it. Whatever Clinton may think she is accomplishing here, she's not helping the Democrats' cause.

Sanders, for what it is worth, seems to be handling this issue about as well as possible.

I also asked Sanders why he thinks Clinton is still talking about 2016. "That's a good question. You should ask her," he said.

When you get right down to it, this whole debate over who is "qualified" to be president seems quaint and not a little ridiculous in 2020—just take a moment to remember who is the current occupant of the White House.

Remember also that Sanders is an avowed socialist who has palled around with Soviet leaders, admired the economic achievements of Cuba under Fidel Castro, advocated for the nationalization of "utilities, banks, and major industries," disdained private charity, and become a multi-millionaire while delivering a message about the importance of government-enforced equality.

If mainstream Democrats can't find something in all of that to criticize, they don't deserve to beat him in the primaries.