By complaining to Yale about Bandy Lee's violation of the Goldwater Rule, Dershowitz lets her portray herself as a brave dissident. 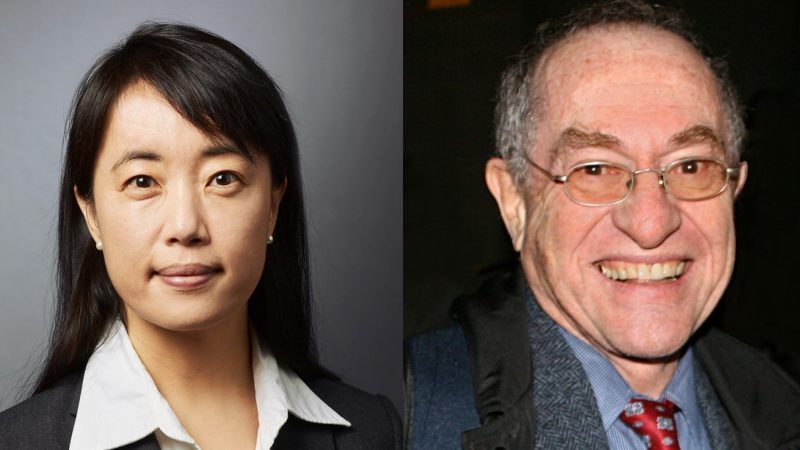 Yale forensic psychiatrist Bandy Lee, who famously diagnosed Donald Trump with narcissistic personality disorder, is now suggesting that Harvard law professor Alan Dershowitz, a conspicuous critic of claims that the president is guilty of obstructing justice or other impeachable conduct, suffers from the same mental disorder. Not only that, Lee says on Twitter, but "just about all of Donald Trump's followers" suffer from a "shared psychosis"—a pseudomedical conclusion that nicely illustrates how Lee and like-minded Trump critics try to shut down political debate by portraying their opponents as mentally ill.

Dershowitz made that point in a recent Gatestone Institute essay. "Her resort to diagnosis rather than dialogue is a symptom of a much larger problem that faces our divided nation," he writes. "Too many Americans are refusing to engage in reasoned dialogue with people with whom they disagree."

Unfortunately, Dershowitz seems to be doing something similar by complaining to Lee's employer about her diagnosis of him.

Dershowitz notes that Lee's habit of bludgeoning her opponents with the American Psychiatric Association's Diagnostic and Statistical Manual of Mental Disorders (DSM) flies in the face of the APA's Goldwater Rule, which says "it is unethical for a psychiatrist to offer a professional opinion unless he or she has conducted an examination and has been granted proper authorization for such a statement." Lee argues that the Goldwater Rule should not prevent psychiatrists from bringing their expertise to bear on important issues of the day—in particular, Trump's presidency, which she views as an existential threat to humanity. Yet the rule, a response to similar psychiatric critiques of 1964 Republican presidential nominee Barry Goldwater, was meant to discourage passionate partisans like Lee from casting their political opinions as professional medical judgments, which is exactly what Lee is doing.

The basis for Lee's diagnosis of Dershowitz shows how casually she tosses DSM labels around. In lieu of an "examination," she cited a July 18 Fox News interview in which Dershowitz responded to Virginia Giuffre's claim that Jeffrey Epstein, the financier who committed suicide in jail last August after he was arrested on federal charges of sex trafficking minors, forced her to have sex with Dershowitz, who represented Epstein in a 2006 Florida case involving underage prostitution.

"I've had sex with one woman since the day I met Jeffrey Epstein," Dershowitz said, referring to his wife. "I challenge David Boies [Giuffre's lawyer] to say under oath that he's only had sex with one woman during that same period of time. He couldn't do it. So he has an enormous amount of chutzpah to attack me and to challenge my perfect, perfect sex life during the relevant period of time." Dershowitz averred that David Boies "has a terrible reputation for sexual activities."

Boies' sex life, of course, is logically irrelevant to the merits of Giuffre's charge against Dershowitz, or of Dershowitz's counter-charge that she is guilty of defaming him. But if it is true that Dershowitz was faithful to his wife "during the relevant period," then it must be true that Giuffre is lying or mistaken. Showing little interest in what actually happened, Lee latched onto Dershowitz's use of the word perfect to describe his sexual fidelity, which she cited as evidence that he caught a mental disorder from the president.

"Alan Dershowitz's employing the odd use of 'perfect'—not even a synonym—might be dismissed as ordinary influence in most contexts," Lee tweeted. "However, given the severity and spread of 'shared psychosis' among just about all of Donald Trump's followers, a different scenario is more likely. Which scenario? That he has wholly taken on Trump's symptoms by contagion. There is even proof: his bravado toward his opponent with a question about his own sex life—in a way that is irrelevant to the actual lawsuit—shows the same grandiosity and delusional-level impunity. Also identical is the level of lack of empathy, of remorse, and of consideration of consequences (until some accountability comes from the outside—at which time he is likely to lash out equally)."

Contrary to Lee's implication, Dershowitz's use of perfect predates by more than two months Trump's dubious reliance on that adjective to describe his July 25 phone call with Ukrainian President Volodymyr Zelenskiy, the conversation at the heart of his impeachment. "I guess she believes he caught the contagion from me," Dershowitz writes. More to the point, Lee is pretending that her assessment of Dershowitz's character (which includes the assumption that Dershowitz did in fact have sex with Giuffre) is an objectively verifiable scientific conclusion. While that is very much in the spirit of the DSM, the APA at least expects psychiatrists to actually meet and examine people (and get their permission) before publicly issuing such a diagnosis.

Irked by Lee's departure from the Goldwater Rule, Dershowitz sent a copy of his response essay to the deans of Yale's medical and law schools, where Lee works. He tells me he "asked Yale to determine whether her diagnosis of me violated the academic standards of the university." Now Lee, who does not hesitate to use her position and psychiatric expertise to stigmatize people who disagree with her, is portraying herself as a brave dissident, which is pretty funny given the dearth of MAGA hats at Yale and the accolades she gets on Twitter.

"Alan Dershowitz has now taken his grievance to the deans of Yale Law School and Yale School of Medicine," Lee writes. "Fortunately, I am less afraid of power than I am of truth. I have considered the costs; if he expects me to cower and to compromise, I will not."

Noting Lee's complaint about his complaint, I suggested to Dershowitz that contacting Lee's employer looks like an intimidation tactic. "I merely informed Yale of the facts and asked them to determine whether she broke any university rules," he replied by email. "It's their decision how to proceed. I don't think she has a free speech right to defame me."

While Lee's implicit endorsement of Giuffre's claim against Dershowitz might be viewed as defamatory, since it concerns a factual issue, her diagnosis of him is simply a personal opinion dressed up as a medical judgment. The diagnostic entity known as "narcissistic personality disorder" is nothing more than a constellation of unappealing, harmful traits (grandiosity, attention seeking, self-centeredness, "exaggerated self-appraisal," etc.) that the APA has decided to give that name. Asking whether Dershowitz (or Trump) really suffers from that "mental disorder" is the same as asking whether they have those traits. One might ask the same thing about Lee, and "there is even proof," based on her public statements, that she possesses at least some of those qualities.

As with DSM labels generally, there is no objective test that can confirm or disconfirm the diagnosis that Lee has applied to Trump and now Dershowitz. It would therefore be impossible to prove that Lee is making an objectively false statement about them. Notwithstanding its baleful effect on the quality of political debate, Lee's promiscuous use of psychiatric labels does a public service by exposing the pseudoscientific pretensions of her profession.