Last week, The New York Times Editorial Board dismissed those concerns and called for a $15 national wage standard. 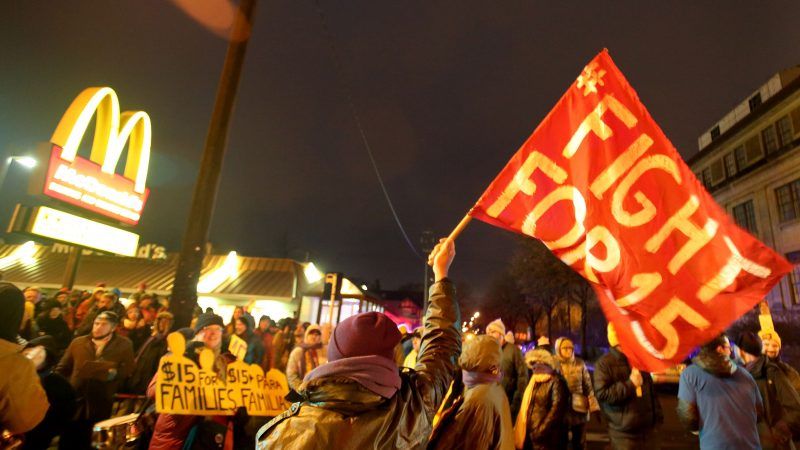 "The idea of using a minimum wage to overcome poverty is old, honorable—and fundamentally flawed," The New York Times editorial board wrote in 1987. "It's time to put this hoary debate behind us, and find a better way to improve the lives of people who work very hard for very little."

Last week, the Times editorial board revisited the issue and reached a different conclusion: "The American economy is generating plenty of jobs; the problem is in the paychecks," the paper writes. "The solution is a $15 federal minimum wage."

The current federal minimum wage is $7.25.

The paper's editorial board points to America's strong economy and low unemployment rate as proof that we can afford to raise the federal minimum wage. It dismisses the possible job-killing consequences—the same ones raised by the paper in 1987—as "never entirely sincere" and says the data we have now shows that doubling the minimum wage will have no unintended consequences for low-wage workers.

Yet the research is anything but decisive, something that freelance business writer Dee Gill points out in the nonpartisan UCLA Anderson Review. "Some 60 years and hundreds of research papers from prestigious universities, government agencies, and private organizations have created little consensus on the subject [of the minimum wage], academic or otherwise," she writes. "Just last year, [in 2017], separate Seattle minimum wage studies by researchers at the University of Washington and the University of California Berkeley suggested polar opposite effects."

The short version of the minimum wage debate can be summed up as follows: some economists say that mandating a higher base pay helps workers without harming their employers; other economists contend that the policy forces employers to slash hours and cut jobs, which ultimately harms workers.

To refute these concerns, the Times board cites a 1993 study by economists David Card and Alan Krueger in which they compared fast-food restaurants in New Jersey, which had recently implemented a minimum wage increase, with businesses in nearby Pennsylvania. Card and Krueger found that the pay hike did not reduce employment in New Jersey.

But consider the first wave of data collected by Card and Krueger in February and March of 1992, before the wage increase took effect on April 1 of that year. New Jersey voted in 1990 to raise the state's wage floor above that of the federal minimum, giving businesses two years to prepare. In early 1992, Card and Krueger observed that Pennsylvania's fast-food restaurants averaged 23.2 full-time workers, while New Jersey's only employed 20.2. That may not have been mere coincidence. "Employers typically don't like to fire workers," writes Thomas Firey, a Senior Fellow at the Cato Institute, "so a rational strategy to prepare for the policy change would have been to reduce employment through attrition in anticipation of the policy change, rather than issue morale-crushing pink slips on March 31, 1992."

The Times also invokes economist Arindrajit Dube's compilation of studies, from which he deduced that raising the minimum wage has a "very muted effect on employment." Yet you don't have to look very far to find studies that come to the opposite conclusion. "Although the wide range of estimates is striking, the oft-stated assertion that the new minimum wage research fails to support the traditional view that the minimum wage reduces the employment of low-wage workers is clearly incorrect," write economists David Neumark and William Wascher. "Indeed, in our view, the preponderance of the evidence points to disemployment effects." Approximately two-thirds of studies they surveyed show a negative impact on jobs.

Neumark and Wascher add that "among the papers we view as providing the most credible evidence, almost all point to negative employment effects, both for the United States as well as for many other countries."

What makes for credible evidence? No two economies are identical or immediately comparable, a fact researchers have been wrestling with since they started exploring the minimum wage question. Regional, state, and municipal economies vary in ways that lead to different outcomes when wage floors change. This fact helps explain the vast variability among researchers' conclusions.

"For many years, researchers have manipulated these control groups to weed out factors that don't equally affect employment in both locations," notes Gill. "But there are huge differences among experts over how the data can justifiably be manipulated."

The research can be confusing, so let's consider Target's $15 minimum wage. In 2017, the retail colossus promised to voluntarily bump pay nationwide, and eventually delivered. Except, for many of the intended beneficiaries, the results weren't positive.

"I got that dollar raise but I'm getting $200 less in my paycheck," a Target employee named Heather, whose hours have been cut from about 40 to 20, explained to CNN. Twenty-two other Target employees were interviewed by the network, all of whom had seen their hours reduced even as their hourly pay increased. Put another way, minimum wage increases don't have to lead to layoffs to hurt the people who are supposed to benefit. Companies can reduce hours to keep take-home pay roughly the same, or slash hours even further, as happened to Heather.

The Times never addresses the very real potential for companies to reduce hours in response to wage increases. But they do eventually grant a more dire concession: "It is possible that a national $15 standard would produce the kinds of damage critics have long predicted," they write at the end of their piece in reference to unemployment issues they initially dismissed. Indeed, the Congressional Budget Office (CBO) recently estimated that about 1.3 million workers would be priced out of the labor market entirely should Congress double the federal minimum wage to $15 an hour.

That comports with the conclusions of Neumark and Wascher, who say that research looking at how the minimum wage affects low-wage workers "provide relatively overwhelming evidence of stronger disemployment effects for these groups."

Yet those individuals wouldn't be the only ones to suffer under a $15 federal minimum wage. Tipped workers, often employed at bars and restaurants, earn a fraction of the mandated minimum and make up the rest of their pay in tips. These employees would see an explosion in hourly base pay from the current federal tipped-wage floor of $2.13. If New York City's tipped wage increases are any guide to what we'd see in other parts of the country, then restaurant staff and their patrons stand to lose quite a bit from a federally mandated increase in the minimum wage.

And what about communities outside of big city centers? An approximate 100 percent increase in Mississippi's minimum wage, for instance, would likely shutter small businesses across the state.

The Times editorial board proposes a workaround to these concerns: a directive "to include exemptions from the $15 standard for low-wage metropolitan areas and rural areas." How would that exemption process work? What would it cost to review requests? How much would businesses and cities spend lobbying for or against carveouts? And with so much money on the line, why not just leave the decision in the hands of policymakers closer to the problem? After all, 24 states raised their respective minimum wages at the start of 2020.

As localities across the U.S. continue to engage in this discussion, politicians and pundits alike should remember that objections to a minimum wage are rooted in genuine concern for the people who will bear the brunt of these policies if they fail.