A 100 percent tariff on European wines could all but wipe out the industry. 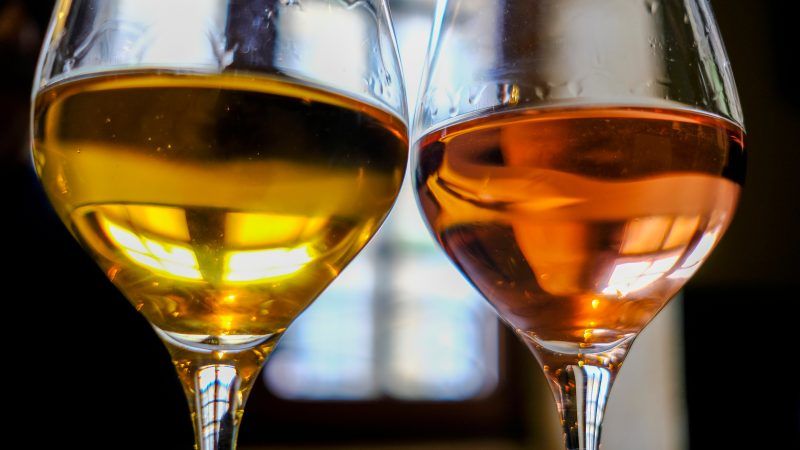 To understand the self-defeating absurdity of President Trump's trade war, consider that much of the U.S. wine industry is now in peril because of a squabble with Europe over…airplane subsidies. Somehow, it's even stupider than it sounds.

In October of last year, the Trump administration slapped a 25 percent tariff—a tax paid by Americans—onto a variety of European goods, including single-malt scotch, and French, German, and Spanish wines containing less than 14 percent alcohol by volume. That tax has been absorbed to some extent by distributors and sellers, but also appears to be pushing up prices for consumers: Anecdotally, single-malt scotch prices appear to have inched up in some stores recently; tariffs likely played a role.

In response to a French tax on the activities of big tech companies, the U.S. Office of the Trade Representative (USTR) in December threatened further escalation in the form of a 100 percent tariff that would hit wines of all kinds, as well as numerous other European goods, from olives and cheese to Dutch ovens.

According to Vinepair, the USTR saw the offending tech tax as "unfairly target[ing] U.S. internet firms while sparing French companies." The 100 percent tariff proposal was, at least in theory, a threat to respond in kind, hitting French businesses in hopes of protecting American firms.

The new tariffs haven't gone into effect yet, and it's possible that they never will—or that they will be implemented in some lesser form. But if they were to go into place in full, they would represent something close to an existential threat to the American wine trade. The likely result would be significant job losses amongst sellers and importers, a sizable reduction in the domestic availability of European wines, and massive price increases for imported wines that would still be available.

The wine business is, by all accounts, a small and tightly knit community of producers and importers and sellers; many importers are small, family-run businesses that would have to lay off staff or even close entirely. Job-loss estimates run anywhere from 10,000 to 17,000, with heavy losses falling on distributors. Americans would lose access to a huge array of wine offerings from Europe, as winemakers would simply stop selling in the U.S. market. Affordable wines in the $15 and under range that appeal to more casual drinkers would probably be hardest hit.

Once supply chains break down, as European producers take their business elsewhere and domestic importers and sellers close their doors, they can be very hard to repair. Even if the tariffs were eventually lifted, there's no guarantee that the wines, or jobs, would come back. The tariffs might not be a death blow to imported wine, but they could cripple the industry for years.

This is the stupid and entirely predictable reality of how trade wars inevitably play out across the economy: A long-standing international fight over airplane subsidies, exacerbated by a mostly unrelated squabble over the foreign taxation of Facebook, threatens to raise prices for American consumers, limit their choices, and destroy domestic businesses and jobs in the process—all in the name of protecting American businesses. France's tech tax is indeed punitive, but harming American businesses and consumers in response is a rather odd way to strike back.

It's possible that there might be some substitution effect, with American wines filling in for European offerings. But any substitution effect would be limited at best: As one wine store owner told The Wall Street Journal recently, "You can't just replace French Burgundy with domestic Pinot Noir. It's a different consumer."

Nor could a 100 percent tariff be reasonably described as a proportional response. Wine industry representatives say the tariffs would harm American businesses much more than their French counterparts. One store owner told Reuters "his business in downtown Manhattan had survived the 9/11 terror attacks, the 2007-2008 global financial crisis, and Hurricane Sandy, but its fate would truly be in jeopardy if the tariffs were put in place." Another wine merchant told The New York Times the proposed tariffs were the "greatest threat to the industry since Prohibition." This may be hyperbole, but there is little doubt the consequences would be severe.

Tariffs are a form of avoidable self-sabotage, and the best evidence so far shows that Trump's trade war has hurt exactly the people it was supposed to help. Yet Trump and his administration have persisted in waging, and threatening to wage, an economic war that Americans are guaranteed to lose.

If there is good news, it's that this particular stupidity can still be avoided. There's no timeline for the increased tariffs to go into effect. And the USTR will take comments on the proposal through January 13. But whatever happens with these particular tariffs, the larger stupidity of Trump's trade war is, sadly, likely to continue.