Although Cannabis Consumers Who Own Firearms Are Federal Felons, Illinois Says They Can Keep Their Guns

The Illinois State Police confirms that people who try newly legal marijuana are not considered "unlawful users" of narcotics. 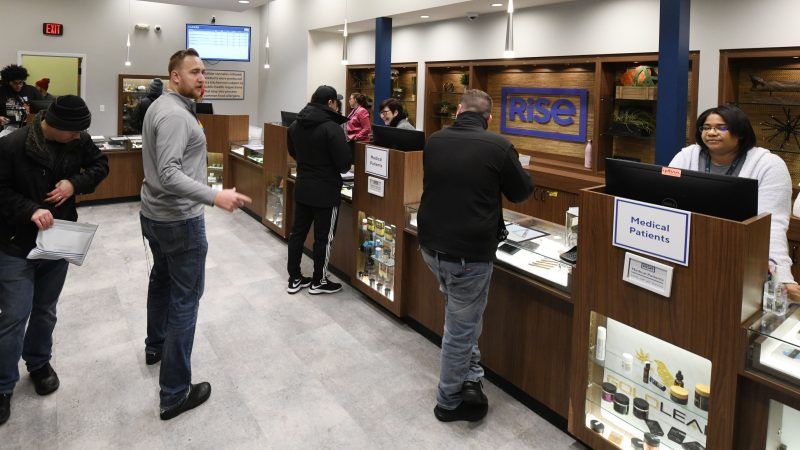 Cannabis consumers in Illinois, where state-licensed marijuana dispensaries started serving recreational customers yesterday, will pay more in taxes than cannabis consumers in most other states that have legalized pot. But at least they do not have to worry that the state police will be coming for their guns, thanks to protections included in the 2019 law that allows adults 21 or older to purchase and use marijuana.

Federal law prohibits gun possession by any "unlawful user" of a controlled substance, including marijuana. When you buy a firearm from a federally licensed dealer, you have to fill out a form that asks, "Are you an unlawful user of, or addicted to, marijuana or any depressant, stimulant, narcotic drug, or any other controlled substance?" The question includes a warning that "the use or possession of marijuana remains unlawful under Federal law regardless of whether it has been legalized or decriminalized for medicinal or recreational purposes in the state where you reside."

Illinois likewise prohibits anyone who has used an illegal drug during the past year from obtaining a firearm owner's identification (FOID) card, which is required to legally own a gun in that state. But the Illinois Cannabis Regulation and Tax Act, which the state legislature passed last year, says "a person shall not be considered an unlawful user…solely as a result of his or her possession or use of cannabis or cannabis paraphernalia in accordance with this Act." This week the Illinois State Police (ISP), which oversees the FOID program, confirmed in a Facebook post that, notwithstanding news reports to the contrary, it will not revoke cards "based solely on a person's legal use of adult use cannabis."

The ISP added that it "will revoke FOID cards where it is demonstrated that an individual is addicted to or is a habitual user of cannabis" (whatever that means). It also warned that "the use of cannabis is still considered to be illegal by the Federal government," and "the purchase of a firearm from a federally licensed firearms dealer is governed by Federal law." So are the possession of firearms and purchases from private sellers, although the ISP did not mention that.

What about the risk that buying marijuana from a state-licensed retailer will tip off the feds? The Cannabis Regulation and Tax Act says that "any identifying or personal information of a [marijuana] purchaser obtained or received in accordance with this Section shall not be retained, used, shared or disclosed for any purpose except as authorized by this Act." Because of that provision, says Ed Sullivan, a former state legislator who is now a lobbyist for the Illinois State Rifle Association, "no cannabis dispensary can share your personal information, unless you authorize them, [with] anyone or any entity. This includes the Illinois State Police (ISP) and the Bureau of Alcohol, Tobacco, Firearms & Explosives (ATF)."

Sullivan warns, however, that the federal government may have access to information about Illinois patients who participate in the state's pre-existing medical marijuana program. "While Illinois treats cannabis as a prescribed drug, the Federal Government considers cannabis to be a Schedule I narcotic," he writes. "As such, the Federal Government could gain access to your records as a Medical Cannabis User and therefore jeopardize your right to purchase a firearm from a Federal Firearm License[e]."

Sullivan concludes that buying marijuana from recreational dealers is a safer option for patients concerned about their Second Amendment rights. I'm not sure about that, since the Illinois Compassionate Use of Medical Cannabis Act promises that the list of registered patients will be kept "confidential," to be shared only among the state agencies charged with carrying out the law. That law does require that the state's prescription monitoring program "make a notation" that a patient is authorized to use medical marijuana "for the purposes of patient care," but it also says "this confidential list may not be combined or linked in any manner with any other list or database except as provided in this Section."

While both the Illinois State Police and Sullivan focus on gun purchases from federally licensed dealers, the federal law banning firearm possession by cannabis consumers also applies to private transfers, or even to continued gun ownership by someone who decides to try marijuana now that it's legal in Illinois. That prohibition is pretty hard to enforce in those contexts, of course, but the fact remains that millions of gun owners are felons in the eyes of the federal government simply because they use an intoxicant that is legal in states accounting for more than a quarter of the country's population.