An Incomplete Map of Uberland

In its eagerness to make the case against Uber, a new book makes a pretty good case for Uber.

Brian Doherty | From the January 2020 issue 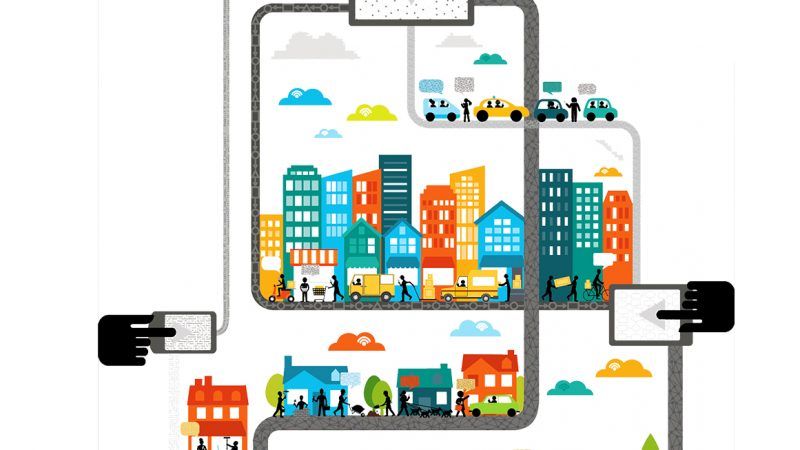 Uberland: How Algorithms Are Rewriting the Rules of Work, by Alex Rosenblat, University of California Press, 271 pages, $26.95

Mariana, a Dominican mother of four in New York, says being an Uber driver is the best job she's ever had. "I love it," she enthuses to Alex Rosenblat, an ethnographer at the Data & Society Research Institute. "You can have your own schedule. You met many different people."

On the other hand, the ride-sharing company has been careless with its customers' personal data and made misleading income promises—claiming, for instance, that New York drivers were earning a median $90,000 a year—a practice that got the company slammed with a $20 million fine from the Federal Trade Commission.

The rhetoric in Uberland: How Algorithms Are Rewriting the Rules of Work, Rosenblat's interview-rich but analysis-thin book, is designed to make readers think concerns about privacy and corporate governance are more important than the increased work opportunities that Uber brings to the lives of people like Mariana. Rosenblat got direct insights from over 500 Uber drivers, through both formal interviews and informal conversations. She also logged lots of time on online message boards where hundreds of thousands of those drivers gather to communicate and kvetch. Needless to say, not everyone earns as much, or loves the experience as much, as Mariana does.

That immersion gave Rosenblat plenty of evidence that different people and different constituencies rate Uber differently. But while drivers have their legitimate complaints, we meet many who see the flexibility and the lack of supervision as far superior to the factory or call-center work they'd previously done; who value Uber's cashless nature for leaving them less open to armed robbery than a previous gig; who find other options for their level of education just nowhere near as satisfactory; or who deeply appreciate that they end up with money to spend by the end of every shift. We meet a single mom whose kids have chronic health problems requiring attention at unpredictable times as well as recent immigrants from war-torn lands speaking of how Uber has added value to their lives they could find nowhere else.

Rosenblat honestly presents such positive details, yet her book's dominant attitude toward the company is suspicious, carping, negative. The style and content of her discontent reveal a peevish but common disdain for innovations when they are based on privately chosen market transactions rather than the disinterested pursuit of social betterment.

Drivers rightfully find many of Uber's practices annoying and in some cases potentially criminal. Among them: suspiciously large numbers of "computer glitches" preventing full pass-throughs of money they earned, tips that get lost between customer and driver, and the system's inherent need for workers to drive lots of uncompensated dead miles and wait for lingering customers, to build up the brand's overall reputation for reliability. In conflicts between drivers and passengers, drivers frequently find the company difficult to communicate with—and prone to siding with paying customers over just one of an apparently endless pool of willing drivers. (The book also points out that Uber essentially sloughs off middle management tasks on its customers, whose ratings discipline drivers.)

Rosenblat spends an inordinate amount of time worrying over whether Uber drivers are "entrepreneurs," as the company sometimes claims. She makes a convincing case that they are not. Uber drivers don't set their own prices, can be punished for being selective about the jobs they take, and are not provided with sufficient information to make such decisions ably anyway. That said, the complaint that drivers aren't real entrepreneurs because they can't refuse to take passengers to certain neighborhoods rings hollow from Rosenblat—destination discrimination isn't usually something progressives favor.

Indeed, Uber bugs Rosenblat for reasons beyond an objective, reasonable bill of indictment. Mostly, in language she repeats many times, she is peeved that Uber is "playing" us as a society with promises and rhetoric that she thinks don't hold up. She complains that the company sells a young-hip-white-millennial image, which she associates with the HBO series Girls, that doesn't reflect the actual drivers she meets. That might be something to make jokey-snide tweets about, but it seems curiously ancillary to any real driver, rider, or public concern such that she should devote so much space to it in a serious book.

Rosenblat also finds it worth noting, in regard to Uber's alleged techno-hip aura, that "drivers…don't game search-engine-optimization results to boost their presence on the internet…they aren't 'happiness engineers' or 'code ninjas.'" No, they provide low-cost rides to strangers. And that's far more important to passengers than is Rosenblat's cultural-studies style of critique.

At one point she complains that "the company's marketing emphasizes the trendy idea of driving for a tech -company, which somehow is more desirable than if the same job were branded more bluntly as a taxi job for immigrants." If in fact Uber is mostly "a taxi job for immigrants"—and many of the drivers she meets are indeed foreigners without a lot of other opportunities—why isn't that alone enough of a reason to like Uber?

When it comes to larger social threats, the only even half-concrete example that Rosenblat presents is in her subtitle: She believes Uber is "rewriting the rules of work," most damagingly by undermining the legal status of "employee."

Uber treats drivers as independent contractors. The drivers are thus compensated entirely by a portion—constantly fluctuating—of their total fares. They are responsible for their own expenses and taxes, including Social Security (which, Rosenblat finds, makes many of them unaware of their true net earnings). They get no paid sick leave or vacation days, no employer-provided health insurance. On the other side of the ledger, they have complete flexibility as to when they work, and they have access to millions of potential customers without having to make any effort beyond activating an app.

In April, the U.S. Labor Department declared that most people who drive for ride-sharing services are independent contractors under federal law. But in September California codified via state law that Uber and similar companies must treat drivers legally as employees, with all the cost and bureaucracy that implies. According to a 2018 study from the National Employment Law Project, that change could add 30 percent to the company's operating expenses in that state, where it claims to have 200,000 active drivers. Uber, for its part and against the clear intent of the law, is claiming both that even under the new standards their drivers should not be classified as employees, and that it intends to sponsor a ballot initiative down the line to upend the new law, which doesn't go into effect until January 2020.

In any case, Uberland presents no evidence Uber's algorithms are upending everything about work and society. The company isn't even upending everything about its own contractors. For most drivers, the service seems to function as a stopgap option to make quick money. Rosenblat's data show that more than half of Uber drivers are active for fewer than 15 hours a week and that 86 percent either have or are actively seeking more traditional full-time work. One in six drivers are new in any given month, and 68 percent of drivers last no more than half a year. Driving for Uber doesn't seem to be too many people's idea of a great career, but it remains a great option for some people sometimes.

Rosenblat frames this very openness as a problem: It creates tensions, she says, between "labor rights" (the right of those who have a job to keep others out in order to increase their income) and "civil rights" (the right to have access to the work). She thus ends up criticizing Uber for what, under other circumstances, might be seen as corporate social responsibility. When the company builds stakeholder coalitions with "women who code," or Mothers Against Drunk Driving, or the NAACP, Rosenblat accuses it of trying to leverage those groups' political power to the business's benefit. All that, she writes, is just "emotional ransom" and "part of its hustle." Even providing reliable service to customers comes under suspicion, as it has tended to make those customers unpaid grassroots activists in Uber's political fights.

There are legitimate reasons to criticize Uber, and Rosenblat covers them. But if you base your analysis on the idea that a company can be criticized for anything that helps it profit or survive, you will miss most of the positive things that business does for the world. On Rosenblat's own evidence, it would be difficult to argue that drivers, passengers, or the culture at large would be better off without Uber.