Democrats Still Fundraising Off Citizens United, Still Wrong About What It Means 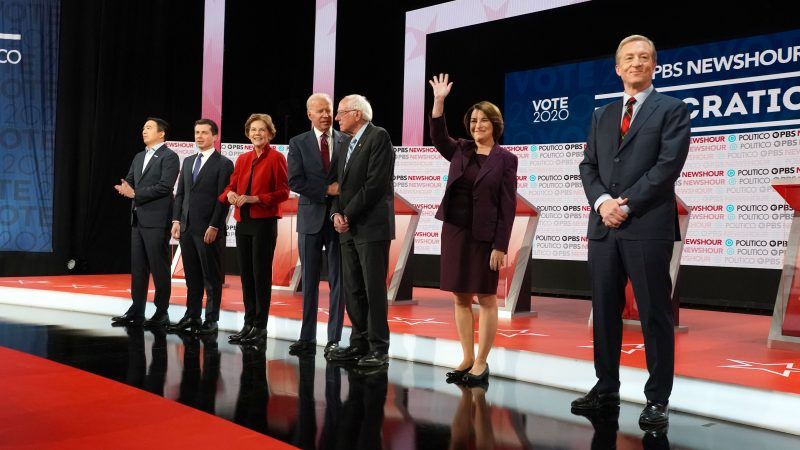 It's a fine line between wine caves and constitutional amendments that squelch speech. Amy Klobuchar is ready to bridge the gap.

"I did not come here to listen to this argument," the Minnesota senator and 2020 presidential candidate tweeted Thursday night, echoing comments she made onstage during the PBS-sponsored Democratic debate as Sen. Elizabeth Warren (D–Mass.) and Mayor Pete Buttigieg slung barbs about each other's wine-cave fundraisers and billionaire donors.

"I came here to make a case for progress—that means passing a constitutional amendment to overturn Citizens United," Klobuchar continued.

Anti–Citizens United talking points have always been popular among the Democratic base, and they always make no sense in terms of what the ruling actually does or says. So one more time: Citizens United is not about dark money and buying elections. It protects progressive and left-leaning nonprofits, labor unions, and reliably Democratic membership associations as much as anyone else. Citizens United is a speech-expanding and pro–civil liberties ruling.

But Democrats again are rallying around the idea that we need a constitutional amendment to overturn this Supreme Court decision.

Campaign finance reform "is what unites us up here," Klobuchar said on last night's debate stage. "That means passing a constitutional amendment to overturn Citizens United. It means making the first bill we pass when I am president HR1, which is the ethics reform passed in the House…"

"We must overturn Citizens United with a constitutional amendment to end the corruption of our campaigns and elections," tweeted Warren on Tuesday.

Over the summer, Senate Democrats introduced a bill to overturn the Court's Citizens United ruling. And Warren, Klobuchar, and Buttigieg all backed a "Reform First" pledge written by a group called End Citizens United, in which they promised to introduce legislation that the group backed and the group began fundraising for them.

has more than four million members around the country, including half a million donors, and raised nearly $9 million for candidates in last year's elections. During that campaign, it urged candidates to reject contributions from corporate political action committees, and helped persuade Democratic congressional leaders to introduce a reform bill as the first legislation of the new House majority.

The group—which takes its name from the 2010 Supreme Court decision, despised by liberals, that drastically loosened regulations on campaign funding—has also provoked consternation from some Democratic elected officials, who argue that the party should not relinquish certain streams of funding, like corporate PAC money, when Republicans refuse to do the same.

So the group raises money from Democratic donors and then uses it to endorse candidates, fund candidates, and issue communications supportive of these preferred candidates. That sure sounds a lot like the system they supposedly exist to fight against.

You don't hear much from Democrats "about how the federal government once tried to claim the power to ban books in its losing Citizens United argument," as Damon Root wrote when Democrats were complaining about the decision back during the 2016 election:

Nor will you hear much about the fact that the ACLU—nobody's idea of a conservative outfit—actively sided with Citizens United and filed a brief that opposed the government's censorious position (Floyd Abrams, the legendary First Amendment lawyer who previously battled the Nixon administration in the 1971 Pentagon Papers case, likewise came down on the side of Citizens United)."

The evangelical Christianity Today magazine has endorsed impeachment, and President Donald Trump is not pleased.

….have a Radical Left nonbeliever, who wants to take your religion & your guns, than Donald Trump as your President. No President has done more for the Evangelical community, and it's not even close. You'll not get anything from those Dems on stage. I won't be reading ET again!

Retirement savings restrictions loosened. One small measure of good in the massive spending bill soon to be signed by Trump is a provision making it easier for small businesses and organizations to pool together to offer savings plans to employees. "The legislation also seeks to expand retirement plan coverage by making it easier for small companies to join together to offer 401(k) plans and share administrative costs," The Wall Street Journal reports. In addition:

The legislation paves the way for the growing number of Americans staying on the job into their 70s and beyond to continue saving in individual retirement accounts. Starting Jan. 1, it removes the age cap for contributing to traditional IRAs, currently 70½, for individuals with wage income. And it allows people with tax-deferred accounts to delay, until after turning 72, the minimum withdrawals the law currently requires starting after turning 70½. (The change applies to people who turn 70½ after Dec. 31, 2019.)…

Other features of the legislation include a provision requiring employers to allow certain part-time workers to participate in 401(k) plans….

For parents and others with 529 education savings accounts, the legislation allows tax-free withdrawals of as much as $10,000 for repayments of some student loans. Parents can also take penalty-free distributions from retirement accounts of as much as $5,000 within a year of the birth or adoption of a child.

My decision to vote "present" was a decision to actively protest this zero-sum mentality that rules over our politics today.

"On Deregulation, Trump Has Achieved Little"

"The hoped-for transformation of the administrative state is nowhere to be found." https://t.co/GvJHgjF1mx