Justin Amash on Impeachment: Republicans Are Betraying the 'Principles and Values They Once Claimed To Cherish'

The libertarian congressman announced on the House floor that he will vote in favor of impeachment. 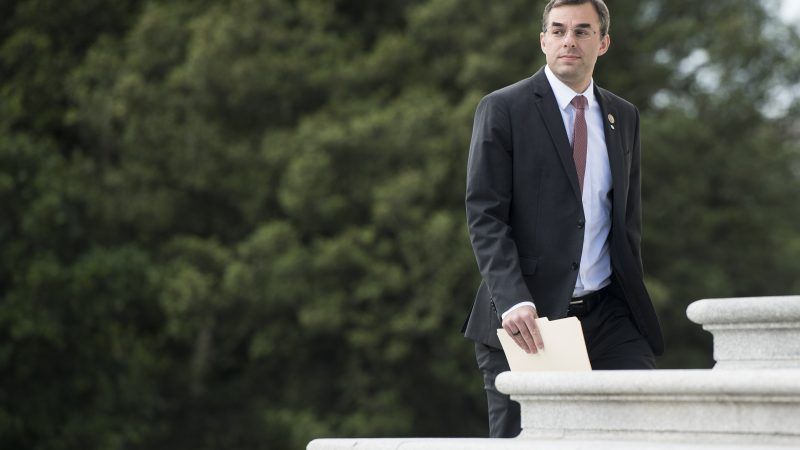 As House lawmakers on Wednesday debated the articles of impeachment against President Donald Trump, the back-and-forth fell into a familiar rhythm: Democrats argued that checking Trump's actions should transcend partisan politics, while Republicans repeatedly said the proceedings amounted to nothing more than partisan political theatre. But Rep. Justin Amash (I–Mich.), who now identifies with neither party, sought to remind his colleagues that the political nature of the moment is not a valid reason to dismiss the allegations against the president.

"I rise today in support of these articles of impeachment," he said on the House floor. "Not as a Democrat, not as a Republican, but as an American, who cares deeply about the Constitution, the rule of law, and the rights of the people." The five-term congressman noted that the impeachment process should not be about "policy disagreements," "ineffective governance," or "criminality based on statutes that did not exist at the time our Constitution was written." Instead, he said, it "is about maintaining the integrity of the office of the presidency and ensuring that executive power is directed toward proper ends in accordance with the law."

Amash left the Republican party in July after declaring in May that he believed Trump committed impeachable offenses. "Today, I am declaring my independence and leaving the Republican Party," he wrote in The Washington Post. "No matter your circumstance, I'm asking you to join me in rejecting the partisan loyalties and rhetoric that divide and dehumanize us….The two-party system has evolved into an existential threat to American principles and institutions."

The congressman has since accused Republicans of crying partisanship in order to disguise their own political motivations. He has also criticized members of the GOP for misrepresenting elements of the impeachment process, which he attempted to clear up on the floor today, as well as for some stating outright that they will not serve as impartial jurors during a trial:

Republicans are making a concerted effort to mislead. "High Crimes and Misdemeanors" is pointedly NOT about statutory crimes. In fact, the Constitution doesn't provide for impeachment for ordinary crimes; they must be "high." Impeachable wrongdoing must relate to abuse of office.

What did the Framers mean by "high Crimes and Misdemeanors"? "High" denotes high office. They were not describing statutory misdeeds but rather "those offenses which proceed from the misconduct of public men, or, in other words, from the abuse or violation of some public trust.…

Senator Graham has chosen to violate his oath to support and defend the Constitution, his oath to do impartial justice in an impeachment trial, and his duty to represent all the people of his state, not just those who share his political views or desire a particular outcome. https://t.co/bjz5PlkHyk

"This should be unanimous, not partisan," Amash said earlier this month. "Impeachment in the House is not a conviction. The trial happens in the Senate. All the House does is charge impeachable conduct. All we need is probable cause. That threshold is easily met with the existing evidence."

Republicans have continuously denounced the evidence against Trump, discounting the testimony of multiple witnesses and characterizing it as flimsy hearsay. The president is facing impeachment for abuse of power and obstruction of Congress following accusations that he violated his oath of office in order to pressure Ukraine into investigating his political foes.

"Conservatives will someday face the horrible truth that the Republican Party fought so hard to justify and excuse an amoral and self-serving president," Amash tweeted last night, "and what he gave them in return was bigger government and erosion of the principles and values they once claimed to cherish."