Why Is Vermont Treating Its Sustainable Poultry Farmers Like Garbage? 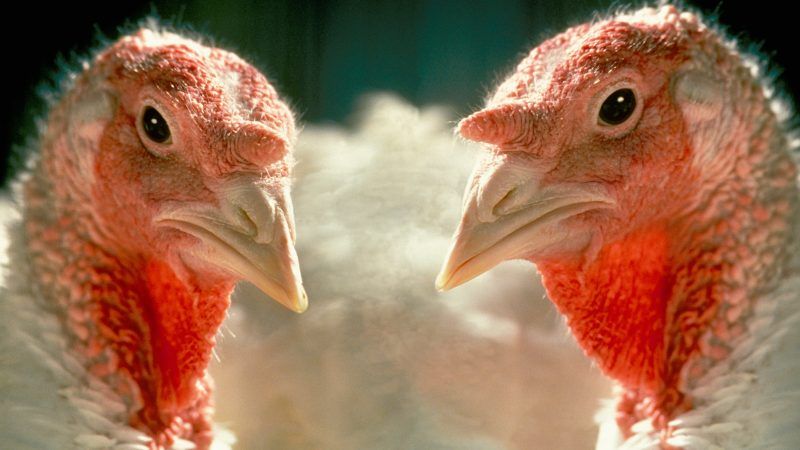 "Until last year, this small group involved in both composting and farming were viewed as farms and overseen by the Agency of Agriculture," Vermont Digger reported. "By next November, they will have to receive solid waste permits from the Department of Environmental Conservation, a change the on-farm composters say will be costly and complicated."

"It's had a huge economic impact on us," Tom Gilbert, owner of Black Dirt Farm in Greensboro Bend, told the Digger last week. "The piece about [us] not being a farm, it would basically be impossible for us to be open."

A report at Seven Days Vermont described composters in the state as "baffl[ed]" as to "why the Vermont Agency of Agriculture, Food & Markets is making on-farm composting more difficult."

Vermont poultry farmer Karl Hammer, a "compost connoisseur" whose practices have had a great influence on many poultry farmers, is also confused by the new rules.

Compost used as poultry feed includes "coffee grounds, tea bags, vegetable and fruit peelings, leftover pasta" and other food items. Poultry feed is generally the greatest cost incurred by farmers raising chickens. Feeding chickens with compost—they also eat the grubs and other bugs that thrive in the compost—helps reduce or even eliminate those costs. Raising chickens on compost can be "entirely feasible" for many small farms.

Vermont officials can't claim the state doesn't recognize the benefits of composting. Quite oddly, in fact, the state is targeting the feeding of poultry via compost at the exact same time the state is banning food scraps in trash to encourage, ahem, "supporting composters [and] local farmers."

So what's the issue? As the Digger notes, poultry operations in the state that feed their flocks on compost have been the subject of a few complaints over the years, generally around water quality and odor. While these are common agricultural issues, the state appears unwilling or incapable of figuring out how to handle these issues.

Hence, Vermont's agriculture department and its natural resources department have sparred for more than a decade over which agency should regulate the environmental and public health impact of the state's farms. (The Digger's report on the back-and-forth between the agencies and the regulatory confusion that is both the cause and effect of that saga is excellent and well worth a read.)

The state's escalating threat to poultry farmers seems to stem from a 2018 agriculture department memo that declared any poultry farm which feeds its own compost to chickens "a solid waste facility" to be regulated by the state's natural resources department. But this change came as "a surprise to [the] natural resources personnel" who regulate solid-waste facilities.

Now, many Vermont poultry farmers caught in the middle of the agencies' jurisdictional skirmish face an existential threat to their farms and livelihoods.

While this Vermont crackdown on sustainable farmers may seem unusual, it's not. Not at all. I devote a large portion of my 2016 book Biting the Hands that Feed Us: How Fewer, Smarter Laws Would Make Our Food System More Sustainable, to issues exactly like what's occurring in Vermont.

As I detail, lawmakers and regulators around the country—well-intentioned or not—regularly introduce lousy rules that force food producers to adopt practices that are bizarre, unnecessary, and costly to comply with. Oftentimes these food producers are small and—just like those under the gun in Vermont—using sustainable farming practices.

The Vermont fiasco is reminiscent of a bizarre Food and Drug Administration (FDA) proposal several years ago that would have forced most beer brewers—from the smallest to the largest—to register with the federal government as pet food makers. That's not because the FDA learned cats drink beer. Rather, the proposal centered on the donation and sale of spent grains—literally 'spent' because a brewer used them to make beer—by brewers to farmers across America.

Much like feeding compost to farm animals, farmers have fed spent grains to their livestock since prehistoric times. Even today, many brewers in the United States—from MillerCoors to your local nanobrewery—donate or sell their spent grains to dairy farmers.

"This wonderful, synergistic relationship has helped reduce landfill costs for brewers and feed costs for farmers," I write in Biting the Hands that Feed Us. "It's also helped prevent literally tons of 'food waste,' a term that refers to the roughly 40 percent of our food that is not eaten or otherwise put to use and which ends up in landfills, often needlessly."

In the case of the FDA, beer, and spent grains, the agency backed down. In Vermont, legislative reform has so far proven elusive.

That's a real shame. It's time for Vermont to stop treating its small, sustainable poultry farmers like garbage.