This is why we can't have serious conversations about government spending. 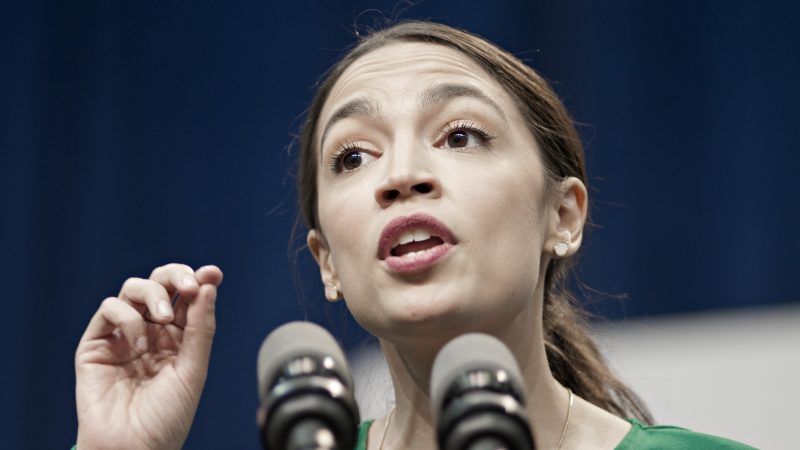 This week the Trump administration finalized new rules for the Supplemental Nutrition Assistance Program (SNAP), otherwise known as food stamps. The plan could potentially remove as many as 688,000 people from the rolls.

Rep. Alexandria Ocasio-Cortez (D–N.Y.) took to Twitter yesterday to talk about how the cuts could have affected a younger version of herself. When her father died in 2008, while Ocasio-Cortaz was still a student at Boston University, her family depended on food stamps to get by. If the new rules were in place then, she claimed, "we might've just starved."

My family relied on food stamps (EBT) when my dad died at 48.

I was a student. If this happened then, we might've just starved.

Now, many people will.

It's shameful how the GOP works overtime to create freebies for the rich while dissolving lifelines of those who need it most. https://t.co/WOrYvhfPj4

But when the new rules take effect on April 1 of next year, any college student whose family is facing the same hardships that AOC did will still have access to the food stamp program. The changes being enacted will only affect able-bodied adults with no dependents.

That's not necessarily a defense of the Trump administration's SNAP eligibility changes—more on that in a moment—but rather a commentary on the sad state of The Discourse whenever transfer programs are subject to public debate. When any attempt to curtail welfare spending is met with accusations that officials are literally out to starve poor people to death, there's is no space for an actual, practical discussion about who should have access to the safety net.

It's one thing to argue that the food stamp program (or any other part of the welfare state) should not be cut. But Ocasio-Cortez only makes that position look ridiculous by engaging in hyperbole over a relatively mundane change in eligibility. And, indeed, that's what this is. Under current rules, able-bodied adults with no children can receive food stamps for up to three months once every three years, but states have the authority to waive that limitation and grant full access in counties where the unemployment rate is higher than a mere 2.5 percent. Under the new rules, states will be able to grant waivers only in counties with an unemployment rate over 6 percent or higher.

Yes, those changes are expected to eliminate SNAP benefits for about 688,000 people when they take effect. For context, there were more than 39 million people receiving SNAP benefits in 2018, a total that has fallen only slightly since the height of the last recession. And food stamps have always operated as a short-term benefit designed to ease the transition after a job loss, not a perpetual entitlement for adults who are fully capable of working and who live in areas with low unemployment.

A more rational debate over the status of SNAP benefits would recognize that no matter where you draw the arbitrary lines for eligibility, there will always be some people who don't qualify. That doesn't mean the government is trying to starve them to death.

But there can—or at least there should—be a legitimate debate over the costs and benefits of this proposed policy change. Cutting those 688,000 people off from SNAP benefits will save about $5.5 billion over five years, according to USDA officials. That's a sizeable amount of money, but it pales in comparison to the $28 billion Trump has pledged to send to farmers—via a different USDA program—to make up for the losses caused by his trade war with China.

In other words, the administration might not be condemning Americans to starve in the streets, but it can't really claim a strong commitment to fiscal conservatism, either.

Our inability to have a reasonable debate about just $5.5 billion has some sobering implications. The federal budget deficit is going to surpass $1 trillion this year. The national debt is heading towards $30 trillion by the end of the decade. And Social Security and Medicare will run a combined deficit of $100 trillion over the next 30 years.

Those are big problems that require serious solutions—solutions that will almost certainly require reductions to current transfer programs. But you can't have a serious debate if every cut is seen as a death sentence.