I Was in a Scooter Accident. I Still Don't Want to Ban Them.

What happened to me could have happened to a cyclist or pedestrian. Blame cars, not scooters. 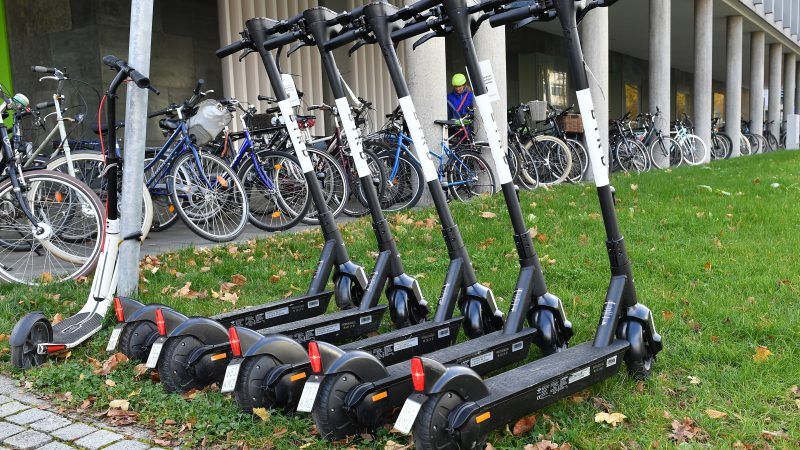 I was headed to Reason's Washington, D.C., office today around noon. My choice of transportation: a Bird scooter. That's how I get to and from work just about every day, unless weather conditions are terrible.

I was in the furthest-right lane of the road, headed through an intersection, when a car to my left tried to turn right, did not see me, and struck me. I'm fine! It was a very minor accident—just a few scrapes. I even scooted the rest of the way to work.

Since I'm an anti-regulation libertarian who rides a lot of scooters, several scooter-skeptical acquaintances asked whether I'd be changing my tune: Surely now you see how dangerous scooters are, and how urgently we need regulation, if not an outright ban!

Not one bit. In fact, I still think the most onerous restriction the D.C. government has forced upon scooters—a max speed of 10 mph—ought to be repealed.

Non-fatal accidents were more common: There were an estimated 1,500 of those. Of course, traffic accidents are not unique to scooters, and can take place while walking or cycling. What happened to me today could have easily happened to a pedestrian or cyclist. On the streets of D.C, cyclists are often traveling at much faster speeds than 10 mph, so whatever danger exists for scooter users also exists for them. The danger, after all, is not actually the scooter or the bicycle—it's cars.

One thing that greatly reduces the risk for commuters is helmets. D.C. does not require scooter users to wear helmets, though some municipalities do. Helmets are a wonderful idea, but forcing people to wear them is not. Travelers routinely flout mandatory helmet laws; giving the police more reasons to stop and arrest people on the streets for nonviolent behavior is never a good thing.

Bird, though, has come up with a great way to encourage helmet use: The company will soon offer free scooter rides for people who take selfies while wearing helmets.

"In our quest to reward riders for strapping on a helmet, the Helmet Selfie was born," said a spokesperson for Bird in the company's press release.

The program was announced last week, and will first go into effect in the D.C. area.

Local governments should let scooter companies innovate strategies for making scooters safer. Unfortunately, several cities in Europe have banned scooters entirely, and some legislators in the U.S. would like to do the same. They should back off. Scooters are a convenient, eco-friendly mode of transportation. And yes, I'll be taking one home.