The Marijuana Black Market Will Keep Its Throne in California, Thanks to Tax Increases

When the government tries to hoover up all the money earned from legalized drugs, this is what happens. 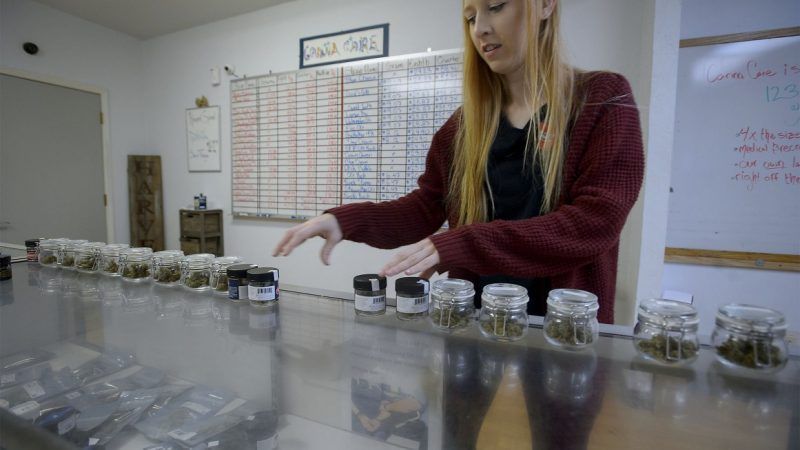 You know what the legal marijuana industry in California doesn't need? Higher prices. But even though black market pot sales already outnumber legal purchases by nearly a three-to-one margin, a state agency is jacking up its taxes on marijuana. The new rates are scheduled to start with the new year.

Marijuana taxes will be increasing in two ways. The first involves the state's 15 percent excise tax, which is calculated based on how much marijuana vendors mark up the price of retail sales to cover their costs and make a profit. The California Department of Tax and Fee Administration (CDTFA) researched average marijuana retail prices across the state, and it determined that sales have been marked up 80 percent from wholesale costs. This is an increase from the previous mark-up calculations of 60 percent. So the state will be demanding a larger chunk of money from every retail marijuana sale.

The second increase is an inflation adjustment for cultivation taxes. The tax on dry leaves, for example, will increase from $2.75 to $2.87 per ounce.

Neither of these tax increases is subject to a vote from lawmakers. The inflation adjustment was baked into the legislation passed in 2017. Indeed, all of these relatively inflexible guidelines were built into a law that tried to guarantee that state and local governments would get lots of revenue out of a new legal industry.

Meanwhile experts estimate that black market marijuana vendors will bring in $8.7 billion in revenue in 2019, compared to $3 billion from legal sales. The state has had to adjust revenue projections downward because it failed to predict how the high costs it was imposing would keep consumers away from legal weed.

Marijuana Business Daily reports that members of the industry

immediately criticized the move, as did Oakland Democrat Rob Bonta, a state assembly member who has twice tried—but failed—to lower MJ taxes through the legislature.

"This short-sighted move ignores the realities that licensed businesses are at the breaking point, with many struggling to survive," Bonta wrote, and reiterated his support for at least temporarily lowering state cannabis taxes.

"As California's regulated market spirals towards collapse from taxes on cannabis consumers…we believe that the CDTFA's decision to increase tax burdens on compliant cannabis operators is counter to developing a safe industry," according to the association's statement.

Earlier in the month, 60 Minutes reported how the absurdly high costs of trying to legally grow weed in marijuana has fostered a black market and ensured that many legal vendors cannot make a profit. The state's response, from Gov. Gavin Newsom and Attorney General Xavier Becerra (both Democrats), has been to launch a new drug war to try to crack down on the black market. It is not unlike Newsom's apparent bafflement that increasing gas taxes in California caused the price of gasoline to rise.

The new taxes will be yet another kick in the teeth of anybody trying to legally sell or buy marijuana in California. A spokesperson from Newsom's office responded to Marijuana Business Daily with a bland claim that they want to "simplify compliance for everyone involved and support a healthy legal market." But the policies the administration is enforcing do the exact opposite of that.