Anthony Comegna | From the December 2019 issue 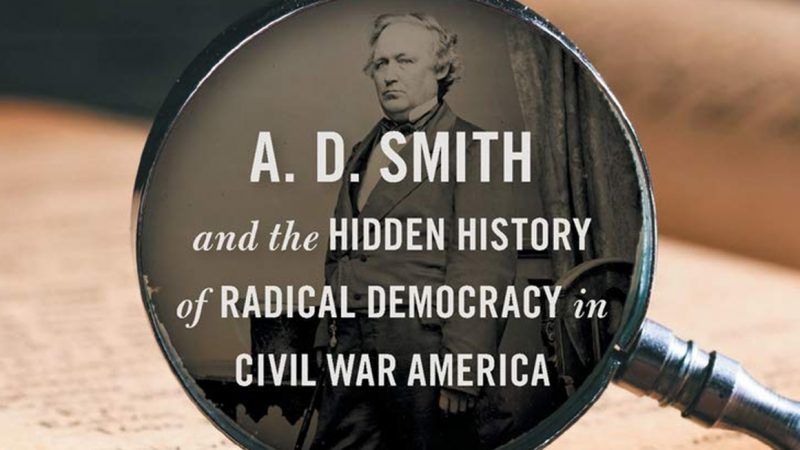 Ruth Dunley first encountered Abram D. Smith as a barely mentioned bit of trivia in Glyndon Van Deusen's 1959 book The Jacksonian Era. "In September, 1838," Van Deusen wrote, "some 160 Hunters from both sides of the [Canadian] border attended a convention in Cleveland, where they elected one Smith, a resident of that city, President of the Republic of Canada."

Who was this Smith person, and how did he get elected by a bunch of carousing yahoos as president of a neighboring country? Why had she never heard of him before? Surely such a colorful figure should have made it into some textbook somewhere; surely his whole legacy was recorded in an obscure dissertation, some old journal article, or at least a beefy footnote. Something out there must explain this guy and his role in what became a major international affair.

But no—not even close. No one had ever bothered to write this man into history. Now Dunley had a dissertation to write.

The Lost President: A.D. Smith and the Hidden History of Radical Democracy in Civil War America is the result of that work. Besides his Canadian adventure, Dunley found, Smith was the Wisconsin Supreme Court justice who struck down the national Fugitive Slave Act in his state in 1854. His name was also briefly floated for the vice presidency on Abraham Lincoln's 1860 ticket. Smith's life would be lost to time but for the efforts of a single historian.

Salvaging the record was no easy task. First off, the phrase "one Smith" from Van Deusen was not much to go on. After checking a variety of Ohio archives, Dunley concluded the man's initials were "A.D." But that made for a bit too much to go on. With 6,294 different necrology files linked to the name, she experienced both ends of the research historian's constant dilemmas: the hopeless dearth of useful evidence and the crushing mountain of clutter. Dunley took hours to comb through baby-naming books for possible combinations, entering them fruitlessly into Google; she checked just about every type of archive; she found suggestions that he may have been a doctor, a lawyer, a politician, but nothing terribly specific; she called on waves of archivists and librarians.

To make matters worse, the election that attracted her attention in the first place was a highly secretive affair, conducted by an underground militia of rowdy radical republicans intent on invading Canada to stir up revolution. These "Brother Hunters" or "Patriots" communicated in secret or by cypher, using their true names as infrequently as possible. Dunley went so far as to enlist an anonymous "hacker" to decode the Hunters' documents. Still no leads.

She learned A.D. Smith's address in Cleveland, but that went nowhere. She learned that he'd served as a justice of the peace there for some time, and she hoped to find a complete name amid the documents he signed. Maddeningly, however, "he had signed nearly every one of the fifteen hundred or so pages of his docket books—some pages twice—but always with just his initials." Her hands were black with Jacksonian-era ink, but still she had no full name: "Not only did the world know nothing about A.D. Smith, but now, as his would-be biographer, neither did I."

And then Dunley did what any enterprising young graduate student might: "I went back to the Internet." After several more hours of digging, she uncovered a brief biography of one Abram D. Smith of the Wisconsin state Supreme Court. A few sources later, she found in an 1897 publication called The Green Bag another explosive scrap of evidence in the evolving mystery of his life. It read: "Before coming to Milwaukee [Abram D. Smith] was a justice of the peace in Cleveland, Ohio." Our author-hero's project finally started to come together.

Once Dunley discovered the essential components necessary to identify "one Smith," she slowly but steadily reconstructed his biography, the ambling and quixotic story of a 19th century "knight errant for republicanism." He was constantly in motion, moving from one place to another, staying just long enough to make a mark yet still disappear without much of a trace. He celebrated America and Americanism in some of the most libertarian ways imaginable: As a young law student, he kept the Fourth one year by firing salutes to revolutionary heroes, drinking in their honor, and napping the day away in a rowboat, isolated on a lake island in New York's mountain country. He dreamed and spoke of universal progress borne across the globe on electrified telegraph lines, railroads, and steamships everywhere. He devoted his professional life to upholding the constitutional system as he understood it—a series of fail-safes between would-be tyrants and the people's liberties—and he seized critical moments to shape events as they came to him.

He was a crusader for those weaker than himself, an advocate for the voiceless, a radical reformer. In the Canadian rebellions, he and others hoped to liberate a downtrodden and exploited people from the world's most powerful empire. Nearly 30 years later, in the South Carolina Sea Islands, he oversaw the redistribution of planter land to the freed people who had worked it.

Smith exhibited all the best (and worst) qualities of early libertarians. He was hopeful, tireless, radical, and passionate. He was also naive, prodigal, headstrong, and romantic. The Canadian rebellions were largely a homegrown affair—a reaction growing out of the place's long history as part of the British empire yet deeply connected to the United States. As Canadians imbibed Jacksonian political rhetoric, separatist leaders such as William Lyon Mackenzie found greater and greater support for dismantling British class legislation and colonial spoils. As it happened, though, far more Americans like Smith supported the cause than actual Canadians.

Smith was lucky enough to avoid battle in the Canadas, but plenty of his fellow Hunters and Patriots suffered or died for their cause at the hands of a British court-martial. James Gemmel was one such captured Patriot, convicted and sentenced to transportation to Tasmania. Gemmel survived and wrote up his experiences, urging his peers to "avoid all frontier movements—the best weapon in the hands of this great republic, with which to revolutionize the world, is surely a strict adherence to that wise, just, and honest policy, which carries in its train prosperity and peace." Smith, meanwhile, spent the next few years marveling that one country (the United States) could peacefully and voluntarily absorb another (Texas) into republican sisterhood. But that wonder of diplomacy was soon outshined by a slaveholder's war for Mexico and the Pandora's box of slavery's expansion in the territories.

A decade later, a runaway slave named Joshua Glover escaped to Smith's Wisconsin, and slave catchers apprehended one of Glover's abolitionist assistants, Sherman Booth, as retribution. In Booth's case, Smith declared the Fugitive Slave Act null and void in his state. Virginians might render human beings into property, but Wisconsin would recognize the humanity of all people.

His stance made Wisconsin the first state to outright refuse cooperation with the national fugitive slave law. It was a major moment in the immediate prehistory of the Republican Party.

Yet by 1860, the Supreme Court had overturned his decision. Smith was rocked by a local bribery scandal, dumped from the Democratic Party, rebuffed by the Republican Party, and left without any vehicle for his constant stream of causes.

He must have leapt at the chance, then, to join the Direct Tax Commission in organizing newly freed slaves in the Sea Islands. There, he spent his final years enjoying the former slaves' new liberties with them, helping them toward literacy, subsistence, security, and equal citizenship. But even then, bureaucracy won the day; Smith's fellow commissioners convinced the Lincoln administration that he was doing more harm than good.

And perhaps he was. Smith died on a steamer from South Carolina to New York, the victim of a life of alcoholism and maybe harder drug use as well. He had reportedly been drunk on the job for years.

Throughout his life, contemporaries remarked that Smith's name was likely to go down in history bolded, underlined, and italicized. They thought that posterity would surely remember a man who lived life to such great effect. But historical memory is a fickle thing, and few libertarian heroes will be remembered unless we do the labor of history. Smith died in obscurity and was almost immediately forgotten. Now, thanks to Ruth Dunley and her tireless quest to unravel the Great Smith Mystery, we once again have memories of this man.

Anthony Comegna is assistant editor for intellectual history at the Cato Institute’s Libertarianism.org and a series editor for Cato’s “Everything Wrong with the Presidents” project. His dissertation, “The Dupes of Hope Forever”: The Loco-Foco or Equal Rights Movement, 1820s–1870s, is the first and only history of locofocoism.