They simply disagree over who should be in charge of misusing and abusing those excessive powers. 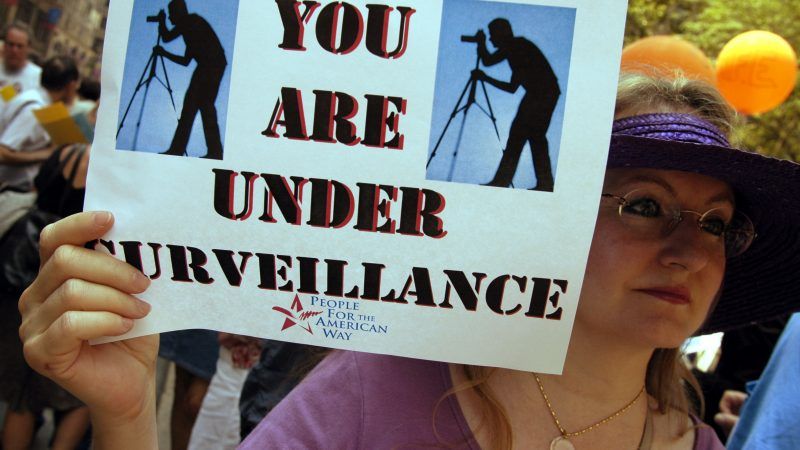 Are you thoroughly invested in the impeachment drama? Do you thrill to the clash of good guys and villains in the ring of democracy, with the fate of the republic as the prize?

Have fun with that. There's a good case to be made that all this political heat and light is little more than professional wrestling for flabby people. If Democrats really feared Donald Trump's exercise of the powers of the presidency, why would they propose extending the surveillance powers of the controversial Patriot Act?

Buried on the next-to-last page of the Continuing Appropriations Act, meant to keep the government's lights on and dated yesterday, is the following language:

This relatively innocuous language pushes back the sunset provision of the Patriot Act by three months, leaving its vast powers in the hands of a president who Democratic presidential hopeful Joe Biden charges with "failure to uphold basic democratic principles," who House Speaker Nancy Pelosi has accused of "alarming connections and conduct with Russia" and, joined by Senate Democratic Leader Charles Schumer, says is making an attempt to "shred the Constitution."

If you take those comments seriously, that's a hell of a guy to trust with the powers granted by the Patriot Act. And frightening powers they are.

"The USA PATRIOT Act broadly expands law enforcement's surveillance and investigative powers and represents one of the most significant threats to civil liberties, privacy, and democratic traditions in US history," notes the Electronic Frontier Foundation. The law "eliminates checks and balances that previously gave courts the opportunity to ensure that those powers were not abused," the group adds.

The American Civil Liberties Union agrees, calling the Patriot Act "an overnight revision of the nation's surveillance laws that vastly expanded the government's authority to spy on its own citizens, while simultaneously reducing checks and balances on those powers like judicial oversight, public accountability, and the ability to challenge government searches in court."

Passed in the panic-stricken wake of the September 11, 2001 terrorist attacks, the Patriot Act was basically a dusted-off wish-list of surveillance-state powers drafted after the 1995 Oklahoma City bombing. Although the bill failed, at first, to gain congressional approval, it sat ready and waiting for the right set of circumstances to come along. That happened as America watched buildings burn and fellow citizens die six years later. Even in that environment of fear, lawmakers included a sunset provision in the Patriot Act, meaning it would expire after four years. With some changes, it was reauthorized in 2005, 2011, and 2015.

The alleged authorship of the original surveillance proposal provides a helpful hint as to why Democrats might be so eager to extend expansive surveillance power, even for a president they say they despise: They had a hand in its creation.

"I drafted a terrorism bill after the Oklahoma City bombing," then-future veep and perennial presidential wannabe Joe Biden boasted to The New Republic in 2008. "And the bill John Ashcroft sent up was my bill."

Whether or not Biden really authored what became the Patriot Act, he and many of his fellow Democrats certainly take pride of ownership and show plenty of enthusiasm for its powers. The 2011 and 2015 reauthorizations occurred under Democratic President Barack Obama, with Biden as vice president.

The Trump administration also favors reauthorization of the Patriot Act, including a dropped provision allowing the National Security Agency to gain access to records of Americans' communications. That part had been somewhat defanged under the Obama administration amidst public uproar over revelations of domestic surveillance by whistleblower Edward Snowden.

The Democratic Party, by and large, seems to be right there with Biden. This year's proposed reauthorization of the Patriot Act isn't exactly a one-off; last year, donkey party leaders kneecapped an effort in the House by dissident libertarian-leaning Republicans and liberal Democrats to roll back some of the more intrusive elements of the Patriot Act.

"It became quickly apparent that leading Democrats intended to side with Trump and against those within their own party who favored imposing safeguards on the Trump administration's ability to engage in domestic surveillance," The Intercept's Glenn Greenwald wrote at the time. "The most bizarre aspect of this spectacle was that the Democrats who most aggressively defended Trump's version of the surveillance bill—the Democrats most eager to preserve Trump's spying powers as virtually limitless—were the very same Democratic House members who have become media stars this year by flamboyantly denouncing Trump as a treasonous, lawless despot in front of every television camera they could find."

When the 2018 surveillance reform measure was defeated, Rep. Adam Schiff (D-Calif.), who now leads the impeachment inquiry against President Trump, gloated that Congress had avoided "a crippling requirement in national security and terrorism cases."

Like I said, it's professional wrestling for flabby people. When it counts—with civil liberties and the (un)trustworthiness of the state to handle its dangerous toys—there's little to distinguish leading Democrats from leading Republicans. Their major real disagreement is over who should be in charge of misusing and abusing those excessive powers. Ultimately, though, Democrats are happy to keep the surveillance state up and running and in the hands of a president they denounce as dangerous.