Democratic Candidates Acknowledge Poor Housing Supply, but Not How Government Causes It 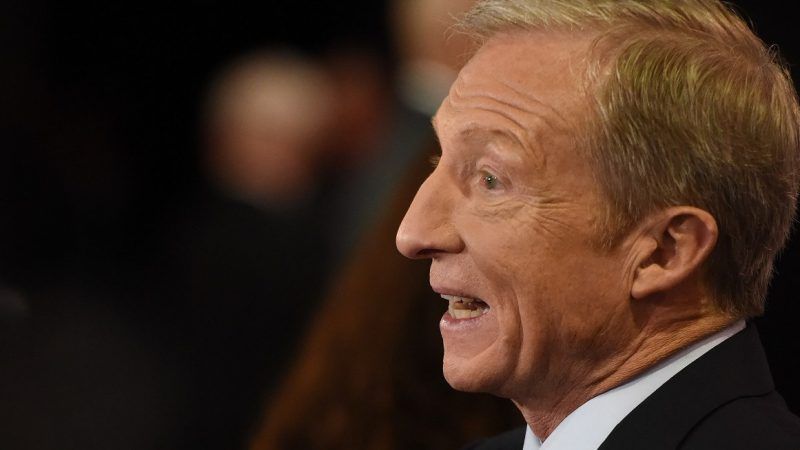 Billionaire environmentalist Tom Steyer, Sen. Elizabeth Warren (D–Mass.), and Sen. Cory Booker (D–N.J.) all weighed in some of the affordable housing challenges faced by residents of American's biggest cities during tonight's Democratic debate. And while they all acknowledged the problem, they also all seemed to believe that more government intervention is a solution to the problem and not its cause.

Steyer was asked about affordable housing first, and to his credit, he was very quick to point out that it is California's own policies that have created the housing shortage currently driving up rents in San Francisco and Los Angeles, but he didn't really get into detail and instead pivoted to his concerns about the environment and sustainability.

Warren said she believed that the housing shortage is due to the federal government's failure to provide more homeownership subsidies and racial discrimination in lending. And yes, she has a plan for that—an expensive one involving $500 billion in federal spending to create affordable housing.

Booker yelled "gentrification" without really explaining what he means and used the opportunity to promote his tax credit for those who have to pay more than 30 percent of their incomes on rent.

All of these answers missed the fact that government interference in housing development plays a massive role in keeping affordable housing out of big cities. Nobody said the word "zoning," and in places like Los Angeles and San Francisco, entrenched residents in traditional homes and the city officials who serve them use zoning laws to prevent the construction of denser apartment complexes that would serve lower-income residents.

Screaming "gentrification," as Booker did tonight, is actually a popular tool used by NIMBY residents to actually block an increase in housing supply with the absurd (and factually untrue) claim that allowing more housing actually drives low-income residents out of their neighborhoods.

Labyrinthine building regulations in big cities push developers into catering to wealthy customers because only they can underwrite the government-mandated costs of developing urban housing. Making it hard to build housing means it's expensive to build housing; in turn, housing that costs a lot to build costs a lot to reside in. The equation is not complicated.

What's more, the federal Davis-Bacon Act—which requires that contractors working on federally funded projects essentially be paid at a rate set by local unions—means that Warren's and South Bend, Indiana, Mayor Pete Buttigieg's plan to federally subsidize housing will further drive up costs by eliminating competitive construction bids. The federal government is forbidden by its own laws from building housing that is naturally as "affordable" as it would be in a competitive market.

Of course, the union giveaway that is the Davis-Bacon Act is off the table for Democrats. Meanwhile, the oppressive zoning policies of America's big cities are local problems that no president can solve. But it's telling that the candidates don't know what's causing the problem or how to fix it.