They should scrap other Certificate of Need laws too. 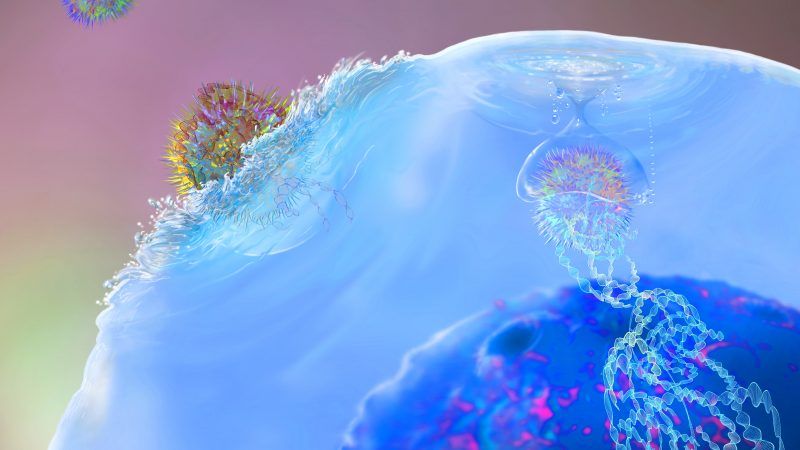 Illustration of CAR (chimeric antigen receptor) T cell immunotherapy, a process that is being developed to treat cancer. T cells (blue), part of the body's immune system, are taken from the patient and have their DNA (deoxyribonucleic acid) modified by viruses (spiky spheres) so that they produce chimeric antigen receptor (CAR) proteins. These proteins will be specific to the patient's cancer. The modified T cells are then multiplied in the laboratory before being reintroduced to the patient. (KEITH CHAMBERS/SCIENCE PHOTO LIBRARY/Newscom)

An anti-competitive regulation would have restricted access to a promising new cancer treatment in Michigan. Fortunately, the rule has been wiped off the books. But its near-adoption stands as a warning about how hospitals can use the government to protect profits at the expense of patients.

Under the rules passed by the state commission, hospitals wanting to offer CAR T-cell treatments and other, similar therapies would have had to obtain additional third-party certifications. The additional certifications would have effectively prohibited many smaller hospitals and clinics from offering this potentially revolutionary treatment.

"Some patients will not have the resources to travel to a major academic medical center and thereby will be excluded from the potential benefits of this life-saving therapy," James Essell, cellular therapy chair of the U.S. Oncology Network, told the commission before it went ahead and adopted the new rules anyway. Similar objections were raised by a variety of cancer research organizations, doctors, pharmaceutical companies, and patient advocates. The American Cancer Society warned that the new regulations meant some patients "may not be offered CAR T-cell treatment or new cellular therapies in the future, or may experience significant health decline or death before they could identify a facility and gain access."

But the commission sided with several large hospital chains, including the University of Michigan Health System, the state's largest hospital system, in unanimously adopting the new rules.

On October 30, both chambers of the Michigan legislature approved a resolution scrapping the rules. A 2002 reform to the state's Certificate of Need laws let them block the regulations from taking effect.

"We would have been the only state in the nation to require additional state-level government oversight of this procedure," said Sen. Curt VanderWall (R–Ludington), who sponsored the Senate version of the disapproval resolution blocking the new rules. "Michigan does not need to add another layer of government bureaucracy at the state level; the current safeguards are more than enough."

Indeed, these regulations were never really about patient safety at all.

In 2017, the Food and Drug Administration (FDA) approved two CAR T-cell therapies for children suffering from leukemia and for adults with advanced lymphoma. In August, the Centers for Medicare and Medicare Services specifically said the type of certification imposed by the Michigan CON commission was not necessary for hospitals to offer CAR-T cell therapy. Instead, the agency recommended a different third-party certification, one that is already required for all hospitals in Michigan.

And while CAR-T therapy is still being developed and other uses of T-cell therapies are yet to be approved by the FDA, the Michigan CON Commission does not do medical testing. Like similar agencies in other states, the extent of its mandate is purely economic, not medical. Though the specific applications of CON laws differ from state to state, their stated purpose is to prevent overinvestment and keep hospitals from having to charge higher prices to make up for unnecessary outlays of capital costs.

"Do we really want unregulated access where let's say 100 hospitals can each treat like three patients? No," Greg Yanik, an Ann Arbor–based oncologist who favored the new regulations, told Crain's Business Journal earlier this month.

Depending on the state, everything from the number of hospital beds to the installation of a new MRI machine could be subject to CON review. And the boards themselves are often subject to regulatory capture and become subject to the influence of large hospital chains or other special interests.

"The attempt to regulate promising new cancer treatment in Michigan proves how easy it is for a Certificate of Need board to extend political power at the expense of patients," says Anna Parsons, a policy coordinator with the American Legislative Exchange Council.

Patients ultimately lose. In 2016, researchers at the Mercatus Center at George Mason University found that hospitals in states with CON laws have higher mortality rates than hospitals in non-CON states. The average 30-day mortality rate for patients with pneumonia, heart failure, and heart attacks in states with CON laws is between 2.5 percent and 5 percent higher even after demographic factors are taken out of the equation.

Innovative immunotherapy treatments are "bringing patients back from the brink of death and giving them a new chance at life," says Vanderwall. "A chance that shouldn't be taken away by bureaucratic hurdles and unnecessary regulations."