Ford v Ferrari Is Thrilling, Excellent, and Not a Superhero Movie 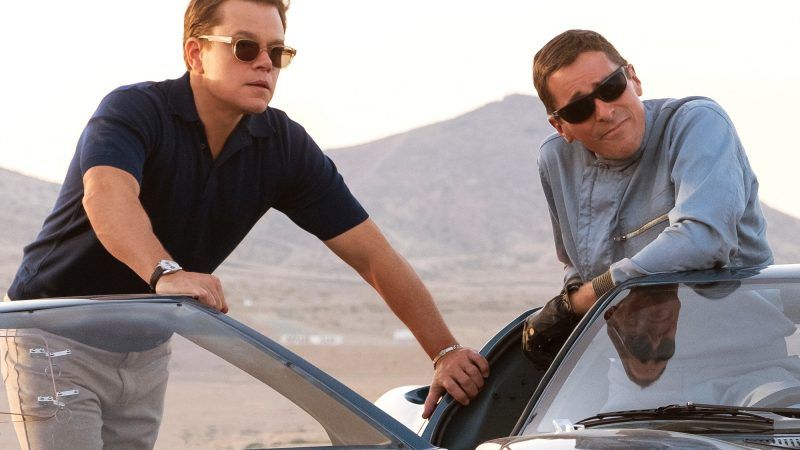 Scorsese is one of my favorite filmmakers: It's possible I've watched his 1976 film Taxi Driver more often than any other movie, and I count Goodfellas as one of a handful of genuinely flawless films. Currently, he is promoting a new movie, The Irishman, which is playing in select theaters and garnering rave reviews. But he's probably made more news for his recent comments about the wildly popular franchise of comic-book movies made by Marvel, which is owned by Disney. Those movies, he said, are "not cinema."

Cinema, Scorsese wrote in an op-ed for The New York Times, was "about revelation—aesthetic, emotional and spiritual revelation. It was about characters—the complexity of people and their contradictory and sometimes paradoxical natures, the way they can hurt one another and love one another and suddenly come face to face with themselves."

Movies, in this view, exist to tell stories that explore and reveal human nature. They are about people—their struggles, their flaws, and their essential qualities. And they take tonal and stylistic risks that franchise blockbusters typically avoid.

Scorsese's worry was that in the age of Marvel and Disney, movies had become something else, something less human, less interesting, and more rote. Moviegoers, he warned, have few alternatives at the multiplex, and filmmakers struggle to get risky, difficult movies made. Superhero franchises are crowding out everything else.

From time to time, I have complained about the ubiquity and generic competence of Marvel superhero movies, and I still wish the studio would do more to vary its aesthetic universe. (That's especially true of its action sequences, which too often feel weightless and perfunctory, like the mass-produced exercises in generic spectacle they are.) And there are certainly ways in which it has grown more difficult to make a medium-budget movie at a major studio.

Yet it's hardly the case that there are no alternatives, no choices for viewers who want to see something different. Which brings me back to Ford v Ferrari. The film stars Matt Damon and Christian Bale as a car designer and driver working for Ford to build a racecar that could beat Ferrari at the 24 Hours of Le Mans race in 1966, and it is a model of classic Hollywood delights—the sort of film that Scorsese worries is being lost to superhero movie sameness.

Built around a handful of sublimely thrilling race sequences and a pair of endearing, magnetic, incredibly watchable movie-star performances, it is part buddy movie, part action film, part exploration of a particular and deeply male form of determination and drive.

Mangold, whose previous films include the Johnny Cash biopic Walk the Line and the Sylvester Stallone crime drama Copland, has always been interested in a certain sort of taciturn middle-aged man and his ambitions, the way that male anxiety and mid-life regret can fuel vision, achievement, conflict, and disappointment. Tellingly, the inciting incident occurs when the head of Ferrari compares Henry Ford II to his father; Damon's character, Carroll Shelby, is a former driver turned engineer who can no longer race due to health complications. In Mangold's world, men are always looking anxiously backwards, struggling to live up to their own impossible expectations for themselves.

Ford v. Ferrari isn't a Martin Scorsese movie; it's more upbeat, more eager to please, more willing to give in to the demands of Hollywood conventionality. Yet it is the kind of movie that Scorsese fears viewers can no longer see, and the kind of movie he wants to see made—visually striking, emotionally complex, focused on the real world and the ways that real people behave within it.

Nor is it the first 2019 film to succeed along these lines: In many ways Ford v. Ferrari reminded me of Quentin Tarantino's Once Upon a Time…in Hollywood, another ruminative, distinctive, period film constructed around the friendship of two middle-aged men played by movie stars with shine to spare. Both are movies about time and permanence, and both manage to extract a surprising amount of cinematic enjoyment out of long, luxurious shots of their leading men driving gorgeous old cars, backlit by the fading light of California sunsets.

These two films are far better than most of their competition, but they are not exceptions that prove a rule. The end-of-year release calendar is packed with ambitious non-superhero films aimed at adults: Knives Out, The Report, Dark Waters, 1917, Uncut Gems, Richard Jewell, just to name a few. It's true, of course, that there's also a new Star Wars film and a sequel to Frozen on the way, and it is a foregone conclusion that both will do outsized business at the box office. But alternatives exist; indeed, they account for the vast majority of theatrical releases. Of the 758 films released theatrically last year, just 10 were Disney films. Just three were made by Marvel.

It is worth noting, too, that Mangold's two previous films—The Wolverine and Logan—were about a superhero drawn from the world of Marvel comics. Like many of Mangold's other films, they were both elegiac and stylish, somber depictions of a man dealing with age and rage. Although they were produced by Fox and not set in the Marvel Cinematic Universe, they were demonstrations of the ways that superhero movies, at their best, can do all the things that Scorsese wants cinema to do.

In many ways, I am sympathetic to Scorsese's concerns about the sameness of studio filmmaking, about the way risk-aversion drives choices about which stories get told and how, and about how the rise of streaming services affect big-screen theatrical viewing.

Yet as a recent Hollywood Reporter roundtable of movie studio heads makes clear, it's only because of a spend-happy streaming service that Scorsese's new film—a three and a half hour movie starring a trio of actors in their 70s that cost nearly $200 million to make—was made at all. Without Netflix, which is often positioned as one of the biggest threats to theatrical viewing, it's quite possible the movie would never have gotten a greenlight. The new, weird era of streaming and superhero movies isn't perfect, and certainly isn't beyond criticism or complaint. But it isn't destroying the cinema that Scorsese loves; it is, thank goodness, ensuring that it continues to exist.