Whether you think of his pressure on Ukraine as bribery, extortion, or simply an abuse of power, the link between military aid and politically beneficial investigations is crucial. 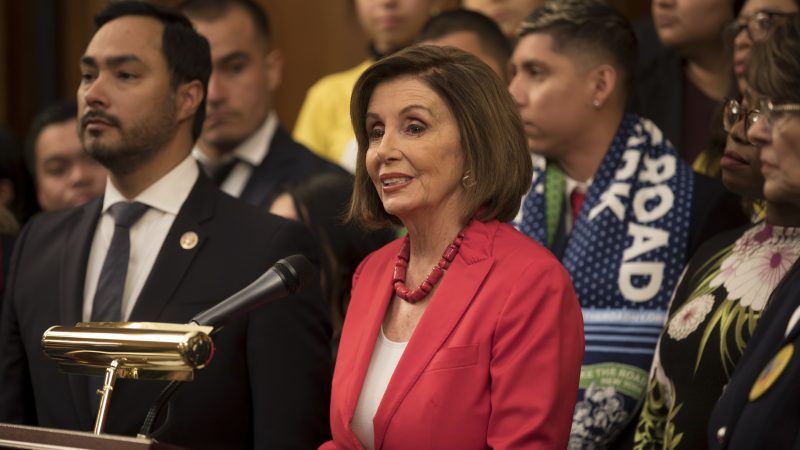 The word bribery has a few obvious advantages. It is specifically mentioned in the Constitution as an example of the "high crimes and misdemeanors" that justify impeachment; it is the offense that most readily springs to mind when people think about public corruption; and it (initially, at least) avoids potential confusion about the meaning and significance of the "quid pro quo" that Republicans deny and Democrats think is obvious. "After weeks of describing the president's actions as a 'quid pro quo,'" The New York Times reports, "lawmakers are looking for a more straightforward and digestible way to describe what happened to their constituents."

But describing Trump's actions as bribery also poses problems as a communications strategy. Trump is accused of withholding benefits—military aid and a White House meeting—from Ukraine to pressure its government into launching (or at least announcing) investigations that would be politically useful to him. That sounds a lot like extortion, especially since the military aid had already been approved by Congress and would have been delivered on schedule if Trump had not blocked it.

Pelosi herself, in explaining why Trump is guilty of bribery, ended up describing extortion. "The president abused his power and violated his oath by threatening to withhold military aid and a White House meeting" if Ukraine failed to launch "an investigation into his political rival," Pelosi said, calling that "a clear attempt by the president to give himself an advantage in the 2020 election."

As George Mason law professor Ilya Somin notes, there is a federal extortion statute that seems to fit these facts pretty well. 18 USC 1601 applies to someone who "knowingly causes or attempts to cause any person to make a contribution of a thing of value (including services) for the benefit of any candidate or any political party, by means of the denial or deprivation, or the threat of the denial or deprivation, of…any payment or benefit of a program of the United States" if that payment or benefit "is provided for or made possible in whole or in part by an Act of Congress."

Pushing the bribery angle, Pelosi said "the bribe is to grant or withhold military assistance in return for a public statement of a fake investigation into the elections." That makes it sound like Trump is accused of bribing Ukrainian President Volodymyr Zelenskiy. But federal bribery laws apply to American officials, not foreign officials, so the relevant question is not whether Trump tried to bribe Zelenskiy but whether he solicited a bribe from Zelenskiy.

If Democrats are determined to frame Trump's actions as bribery, the most obviously germane statute is 18 USC 201, which applies to any federal official who "corruptly…seeks…anything of value…in return for…being influenced in the performance of any official act." In this case, the "thing of value" would be an investigation of Joe Biden and his son, and the official acts would be unblocking the military aid and scheduling a White House meeting. That's not entirely implausible, but the extortion statute seems like a more natural fit.

Either way, the Democrats cannot avoid talking about a quid pro quo, since that is an essential element of both crimes. A bribery conviction under 18 USC 201, the Supreme Court has said, requires "a quid pro quo—a specific intent to give or receive something of value in exchange for an official act." Under 18 USC 1601, the deprivation of benefits likewise has to be aimed at "caus[ing]" the victim to contribute a "thing of value."

Whether you think of Trump's actions as extortion, solicitation of a bribe, or simply a troubling abuse of power that does not necessarily violate any criminal statutes, the connection between military aid (or a White House meeting) and the politically beneficial investigations is crucial. To my mind, that link has been established pretty clearly by the rough transcript of Trump's July 25 telephone conversation with Zelenskiy and by the testimony of administration officials. Others may disagree. But the question of whether there was a quid pro quo remains at the heart of the debate.