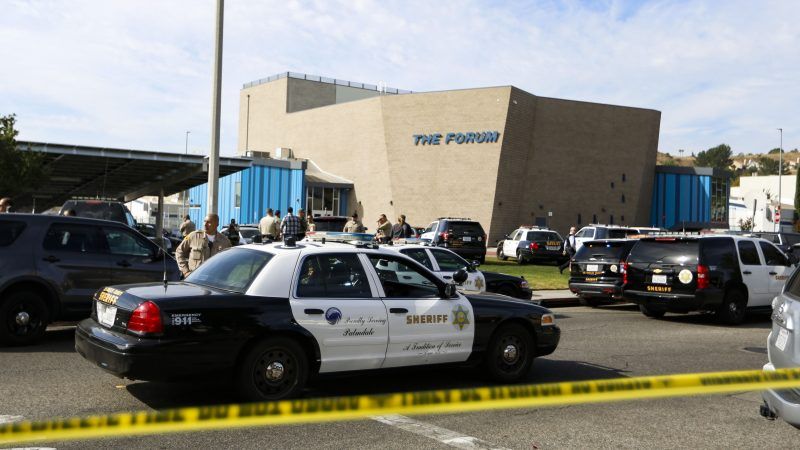 On Thursday, two students were killed and another three injured, in a shooting at Saugus High School in Santa Clarita, California. The gunman has yet to be identified, but police say he was another student at the school and that he has been hospitalized after shooting himself in the head.

The shooting is shocking and tragic. The response from politicians is depressingly predictable: They claim that such shootings are common, they declare that new firearms laws are needed to prevent them from happening, and they don't spend much time considering whether the laws they're proposing would actually have prevented the crime. Former President Bill Clinton and current presidential candidate Kamala Harris both went on CNN to call for a ban on "assault weapons." But the shooter used a .45 semi-automatic pistol, a weapon unlikely to be covered by even the broadest assault weapons ban.

A Los Angles Times editorial noted that the killer is 16 and then declared that "it's not a leap to say that no 16-year-old should have ready access to a firearm outside the immediate supervision of an adult." The fact that the minimum age to purchase a handgun in California is 21 didn't warrant a mention.

Others said that "common sense" gun control legislation shouldn't be a contentious political issue and ripped into Republicans, the National Rifle Association (NRA), and Senate Leader Mitch McConnell (R–Ky.) for making it one.

We don't yet have all the details of the horrifying events in Santa Clarita. But we do know that in America today, children are scared to go to school. Parents and teachers are terrified. And that can't stand. It is time to hold the NRA and our leaders in Washington accountable.

Lives are on the line. We must act. #EndGunViolence https://t.co/dH5j6kiUJ8

Others noted that some schools have reacted to mass shootings by performing traumatizing shooter drills—and cited that bad policy to justify yet more bad policies. "Every politician paid to defend the status quo by the gun lobby needs to answer whether they are comfortable with live shooter drills becoming routine, students running terrified from their classrooms, and entire communities being locked down," former Rep. Gabrielle Giffords told The New York Times.

It needn't be repeated that school shootings are a terrible and tragic thing. It does need to be repeated that these are also rare, and that the long-term trend has been for them to happen less often, not more often.

Rare or not, we obviously should do what we can to stop such shootings from happening. But you can't do that without being aware of the nature of the problem, the trade-offs of the solutions, and—above all—whether the policies you're proposing would even have stopped the crime being discussed.

Uber is fighting for its right to keep deploying dockless for-hire electric scooters in Los Angeles, now that city officials have issued a temporary suspension of the company's permit.

The Wall Street Journal reports that Uber has requested a hearing with L.A.'s transit regulators to discuss the suspension of its permit. The move will allow the company to keep operating while they wait for that hearing.

The dispute comes down to the data. The Los Angeles Department of Transportation (LADOT) requires all dockless scooter companies to share real-time trip data with the city, something Uber has said is a massive violation of their users' privacy.

"By demanding real-time information about people's movements, LADOT is an outlier among hundreds of cities around the world—and independent privacy experts and advocates raised the alarm more than a year ago that LADOT's misguided technique poses serious risks to consumer privacy," an Uber spokesperson told the Journal.

The company has threatened legal action against LADOT if it continues with its demands for real-time data—demands that are likely illegal under state law.

Brooke Nelson, a graduate of Northern State University in South Dakota, told the local paper that she opposed efforts to make a young adult novel by Sarah Dessen the required Common Read book for incoming freshmen.

"She's fine for teen girls," Nelson told Aberdeen News. "But definitely not up to the level of Common Read. So I became involved simply so I could stop them from ever choosing Sarah Dessen."

This has since blown up into a major controversy, with Dessen and other popular authors ripping into Nelson on Twitter. By suggesting that college students shouldn't be being assigned young adult fiction, Nelson was allegedly disparaging already-marginalized teen girls.

Washington Post writer Elizabeth Bruenig has a good thread on what this says about the state of woke culture:

I would like to talk about this episode, in which several young adult fiction writers with huge followings collectively dunked on a college student who opined in a local South Dakota paper that college students should be reading at a higher level than YA. https://t.co/UojWCOCd06

Today, we are calling for a radical transformation rooted in decarceration: The People's #JusticeGuarantee ➡️ https://t.co/67rSvoSmt5 pic.twitter.com/MxdKetnOTo