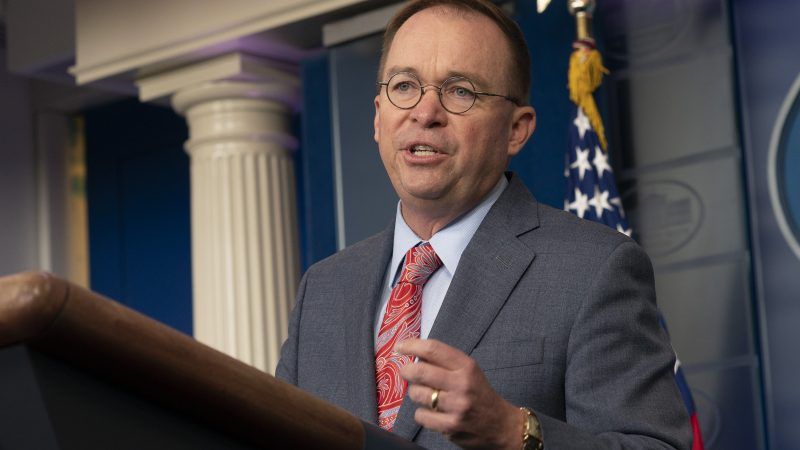 On the impeachment front… Acting White House Chief of Staff Mick Mulvaney wants to get in on a lawsuit that could prevent him from being forced to testify before Congress on the unfolding Ukraine scandal.

On Friday, Mulvaney asked to be added as a plaintiff in a separation-of-powers lawsuit first filed by Charles Kupperman, who served as deputy to former National Security Advisor John Bolton.

In late October, House Democrats subpoenaed Kupperman to testify about President Donald Trump's efforts to pressure the Ukrainian government to launch a corruption investigation into Hunter Biden, son of former vice president and current presidential candidate Joe Biden. The younger Biden had been paid $50,000 a month to sit on the board of Ukrainian energy company Burisma.

White House lawyers argued that current and former senior presidential advisors, including Kupperman, could not be compelled to testify before Congress. Unsure whether to abide by Congress's will or the president's, Kupperman sued, hoping that a federal judge would tell him which branch's orders take precedence.

"Mr. Mulvaney, like Mr. Kupperman, finds himself caught in that division, trapped between the commands of two of its co-equal branches—with one of those branches threatening him with contempt," wrote Mulvaney's lawyers.

The suit's outcome could be crucial to Democrats' impeachment efforts. Not only might it determine whether Mulvaney ends up testifying, but it could also determine whether the House hears from Bolton too. According to a Saturday Axios report, Bolton kept detailed notes of his meetings with Trump and other officials.

Charles Cooper, a lawyer for both Bolton and Kupperman, said in a recent letter to House Democrats' lawyers that Bolton has knowledge of relevant meetings and conversations regarding Ukraine that have not been made public, but that his client would only testify about them if ordered to by a judge.

Bolivian President Evo Morales has resigned following mass protests and accusations that he rigged a recent election. That vote saw him elected to a fourth term as leader of the South American country.

On Sunday, the Organization of American States (OAS) published a report finding "clear manipulations" of the October 20 presidential vote. The group called for a deeper investigation to determine who was responsible for the election tampering.

The head of Bolivia's military had also on Morales to resign, and police in the country mutinied and declared solidarity with the protestors. Morales has described the effort to remove him as a right-wing coup—a line take that's been eagerly picked up by many left-wing American journalists. That opinion isn't unanimous, though. Another leftist journalist, Zeeshan Aleem, notes that opposition to the president and his alleged vote-rigging spans the political spectrum and includes the country's largest trade union.

Given the chaotic situation, it is probably best in the near term to hold off on embracing any group's grand pronouncements on Morales' resignation and who is responsible for it.

Saturday marked the 30th anniversary of the fall of the Berlin Wall. The iconic moment in world history serves as a marker for the collapse of Soviet-style communism across Eastern Europe.

Germans celebrated the anniversary by tearing down replicas of the wall at soccer matches and holding parades of horrible East German–manufactured cars.

As Gerard Baker notes, the spread of civil liberties, democracy, and freer markets to former Eastern Bloc countries has brought not only personal and political freedoms, but also immeasurable economic benefits:

In less than 30 years, gross domestic product per capita has increased more than fivefold in Poland, sixfold in Hungary and almost eightfold in the Czech Republic. Eastern Germany may still lag the affluent west, but economic performance there has been markedly better too.

"A mandatory buyback is essentially confiscation which I think is unconstitutional. It means I am going to walk in your house and take something whether you like it or not." pic.twitter.com/9aBmcAb9eJ