Post-Prison Dark Humor Animates the Winning Back to Life 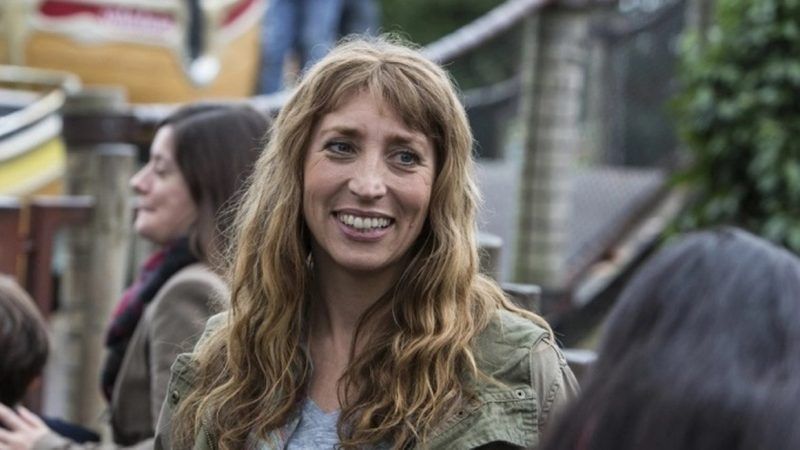 "Back to Life" (Showtime)

The HR officer at the office where Miri Matteson sits is, in her prim British way, trying to be polite. "Your CV is quite … gappy," she notes, a considerable understatement to apply to a resume that hasn't a single entry since the year 2000. Explains Miri, with what she hopes is a winning smile: "I went traveling."

Yes, she did—to prison, for the murder of a teenage pal. Eighteen years later, she's finally out, a suspended-animation teenager whose adolescent zest for life is crumpling against the cusp of middle-age anomie.

That's the story of Showtime's Back to Life, a BBC production that aired earlier this year in Europe. Bouncing unpredictably between somber dejection and daffy dark humor, Back to Life shouldn't work at all. Yet it does, wonderfully.

If Miri's face falls at the discovery that somebody has smeared the words "PSYCHO BITCH" across the fence of her parents' home, it rises again when her parole officer dismisses it as "prank poopy." If a prospective boss mumbles dismissively that he has other promising candidates, Miri airily declares that she, too, has options—including an interview at Blockbuster.

Those sort of anachronistic gaffes are frequent in Back to Life, which offers the sort of alternating distortions of time well-known to anybody who's ever attended a high-school reunion, where everything seems at once so long ago and so just-yesterday.

As Miri excavates layers of CD Walkmen and David Bowie and George Michael posters from her old bedroom, she basks in a naïve expectation that "forgive and forget" will be the order of the day now that she's returned to the little coastal village where she grew up.

She has even believed her parents' idle prison-visiting-room chatter that her old boyfriend is still waiting for her—which perhaps was not untrue but certainly incomplete in its failure to mention his wife and twin daughters. (Not to mention some other, kinkier baggage.)

The confrontation with her boyfriend is just the first of many collisions between Miri's contradictory—and false—expectations that nothing has changed while she's been away and yet that everybody has forgotten the fact that she threw the police chief's daughter off a cliff.

Even within her own, slightly fruitcake, family, the memory of the murder lingers like a cloud. Her father (Richard Durden, Harlots), the sort of obsessive environmentalist who goes to sleep to the sound of taped whale calls, consoles her after one encounter with indignant townfolk with the reassurance that "you've done nothing wrong … recently."

And her sexually frustrated mother (longtime British TV actress Geraldine James), between episodes of militaristic fellatio—"I will not be defeated by a fart!"—hides the family steak knives.

Slithering between these character portraits and mood pieces are a couple of intriguing mysteries. One is an enigmatic stranger of unknown origin asking questions around town about the murder Miri committed so long ago.

The other is, well, the murder itself. What exactly happened between Miri and her girlfriend, and why, goes largely undiscussed in Back to Life. The story emerges haltingly, in bits and pieces, and after the five episodes I watched was still beguilingly incomplete.

Between the competing influences of writers, directors, show-runners and series creators, television productions rarely have a true auteur. But Back to Life is overwhelmingly the work of Daisy Haggard, who not only created and wrote it but plays the struggling-to-survive Miri with a delicate perfection.

Haggard's sole experience in U.S. television was a small but hilarious role as a Hollywood studio suck-up in Showtime's lacerating inside-the-biz Episodes. (Her greatest exposure to American viewers was probably as the disembodied voice of the Ministry of Magic elevator in some of the Harry Potter movies.) After Back to Life, there seems little doubt we'll be seeing a lot more of her. In her writing as well as her acting, she simply doesn't miss a beat, ever.

And in a British television industry with an awesome talent for filthy dialogue, she is clearly the undisputed duchess of depravity. Until you've heard a character addressed as "harlot, slut, killer, man-stealer, cunty-head, great big fat fucker-fuckety-fucker … psycho husband-stealing fuck-biscuit," you just haven't heard dirty talk. If only we could screen this for the FCC, sit back, and watch the heads explode.