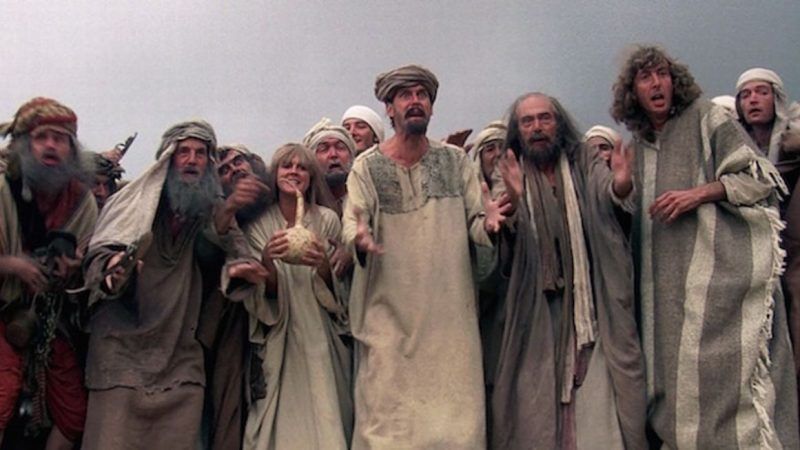 Forty years ago today, Life of Brian made its British debut. The Monty Python satire, in which a man born next door to Jesus is mistaken for the Messiah, was already playing in America, where the movie had earned such notices as "a disgraceful assault on religious sensitivity" and "Never have we come across such a foul, disgusting, blasphemous film before." Now it was coming to the Pythons' home country, where several towns promptly banned any screenings of the picture.

Needless to say, not everyone who disliked the film tried to suppress it. Much of the anti-Brian backlash took the form of criticism, not censorship. And that criticism was never more entertaining than it was the night after the film's premiere, when two members of the Python troupe—John Cleese and Michael Palin—faced off against two of their critics on the TV show Friday Night…Saturday Morning.

The episode was hosted by Tim Rice—yes, the guy who wrote Jesus Christ Superstar—and for the first quarter of an hour it was an amiable affair. The only people onscreen were Cleese, Palin, and Rice, and they had a fairly normal late-night-talk-show conversation, with jokes and stories and so on. Then the other two guests came onstage. One was the humorist Malcolm Muggeridge, who had converted to Christianity a decade before and was not amused by what he called the Pythons' "graffiti version" of the Gospel. The other was Mervyn Stockwood, the bishop of Southwark, who set the tone for the hour when he compared the Python picture to "a farce about Auschwitz."

This section of the program started out rather drearily: Rice asked the bishop what he thought of the movie, and Stockwood replied with a five-minute filibuster of an answer that covered everything from Mother Teresa to Nicolae Ceaușescu. But then the four men started going back and forth, and you got great exchanges like the moment, at the 37-minute mark, when Cleese started reminiscing not-so-wistfully about his days at Clifton College, a preparatory school:

CLEESE: I was given eight or 10 years—10 years—of a form of Christianity which I grew to despise and dislike. Largely, it insulted my intelligence. The sermons that were given, at the age of 11 and 12, I felt insulted my intelligence. When I got into writing this film, we all had exactly the same reaction. We started to discover a lot of stuff about Christianity and I started to get angry, because I started to think, "Why was I given this rubbish, this 10th-rate series of platitudes, when there were interesting things to have discussed? There were factual things." Nobody ever told me they don't know what language the Gospels were written in, that they don't even know who wrote them, and they're not sure what cities they were written in….

STOCKWOOD: John, it's bad luck for you, but you see, I used to go to Clifton College to preach very often when you were there.

At times the guests seemed to be talking past each other: Cleese and Palin kept explaining that their film's protagonist is not Jesus, and Stockwood and Muggeridge kept insisting that he is. But it's an engaging, sometimes electrifying piece of television—and how often do you get to see John Cleese invoking Karl Popper? Watch the full hour here:

At one point, Muggeridge declared of the film: "I don't think in the eyes of posterity it will have a very distinguished place." I guess posterity is a relative thing; the picture's reputation seems intact today, but we can check in after another 40 years and see how it's faring then.

Postscript: Not long after the debate aired, the sketch-comedy show Not the Nine O'Clock News spoofed it, with Rowan Atkinson playing a character who was simultaneously a send-up of the bishop and the Pythons. Watch the original interview before you watch the take-off—otherwise you'll miss half the jokes: