Is New York City Barreling Toward Its Own Housing Crisis?

A report from the city's Department of Planning finds that housing construction has not kept pace with job growth. 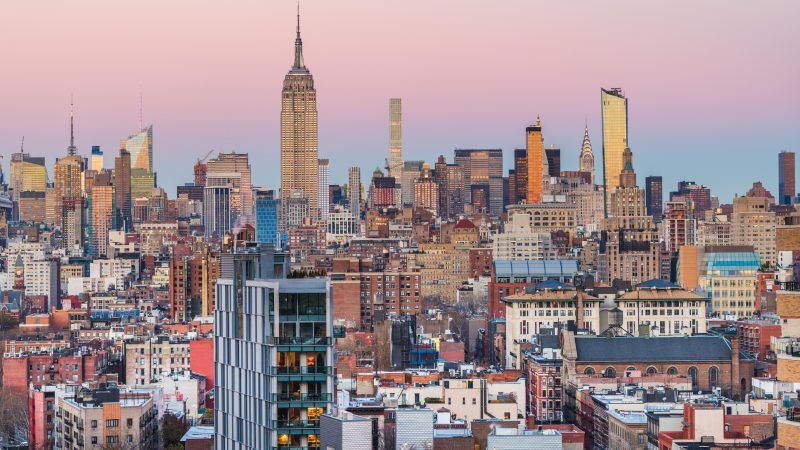 When it comes to the country's urban housing shortage, Californian cities are typically the ones that capture headlines, yet the situation is not much better in New York City.

Surging employment growth is outpacing new housing construction in America's largest metro area, leading to longer commutes and higher housing costs. And while the Golden State has begun, slowly, to adopt prudent housing reforms, New York is doubling down on policies that will only make its problems worse.

In October, New York City's Department of Planning released its second Geography of Jobs report, which tracks employment growth in the region, finding that the 22.6 million-person metro has added 924,000 jobs since 2008, with 675,000 of these added in New York City alone.

That employment growth has, however, not been matched by new housing. Since 2009, the wider New York area added just 457,000 units of housing, or about one new home for every two jobs, according to the planning department's report. This ratio is even more skewed in New York City, where only one unit of housing has been built for every 3.55 new jobs.

"New York City has gained jobs very rapidly, [but] the region as a whole has not produced enough housing," says Eric Kober, a former director with the city's Department of Planning and an adjunct scholar at the Manhattan Institute. "The housing that it does produce is not produced in proportion to the amount of existing population that different parts of the region have."

By comparison, New York City has added 70 percent of the region's new jobs since 2008, but only 40 percent of its new housing units. The New York suburbs in Long Island and the Hudson Valley have added few jobs and even less housing.

Much of this is driven by local land-use policies, says Kober, who told me that places like New Jersey have accommodated new housing development, while New York City has lagged behind, and the New York suburbs have been openly hostile to it.

"The market is functioning in New Jersey, so maybe New Jersey is getting as much housing as the market wants," Kober says. "But it is also a matter of the rest of region suppressing through restrictive zoning what the market would otherwise be inclined to build."

In particular, Kober identifies low-density zoning and minimum parking requirements in most New York suburbs as holding up needed development. Despite already having a lot of high-density areas, he says New York City has also failed to rezone enough land to accommodate the city's growth.

The result is that more people are making longer commutes, many of them via mass transit lines that suffer from overcrowding and frequent delays. Drivers aren't faring much better. The New York metro area has the fourth worst traffic in the country, according to the INRIX's 2018 Traffic Scorecard Report, with commuters losing 133 hours a year to congestion.

New Jersey Transit reports that the number of on-time trains (meaning trains arriving within six minutes of their scheduled arrival) was at 92 percent overall in September, two percent less than the agency's 94 percent on-time goal. Trains traveling to and from New York City's Penn Station had an 85 percent on-time rate during peak hours.

Housing costs have also increased in much of the area. New York City has the second-highest median rents for a one-bedroom apartment, according to a June report from rental website Zumper, behind only San Francisco.

"Cities are labor markets," says Michael Hendrix, an urban policy scholar with the Manhattan Institute. "If we fail to scale housing and transportation to job centers, then we are failing the basic function of a city."

Hendrix warns that if the New York Metro area continues to see commute times and housing prices grow, the economic dynamism of the region will recede, noting that the city actually saw its population shrink last year. Unfortunately, Hendrix says policy at both the city and state level is getting worse.

"New York City and Albany have chosen to go in the wrong direction. They've chosen to preserve units for people who've already lucked out in the housing lottery, and lock out newcomers and outsiders," he says, referencing the state's strengthening of its existing rent stabilization law, which limits how much landlords can raise rental prices.

Developers and landlords cite these changes to the rent stabilization law for wanting to leave the city.

And while California has started to embrace halting reforms to its housing crisis—passing bills this year that make projects harder to delay and building accessory dwelling units easier—New York is considering nothing productive.

New York's housing situation has not yet reached Californian levels of dysfunction. Despite anemic post-recession housing growth, the metro area has still managed to add a unit of housing for every 1.15 jobs.