What happens when preservationists get in the way of a diner owner who is looking to sell his place, retire, and pocket the cash?

Christian Britschgi | From the December 2019 issue 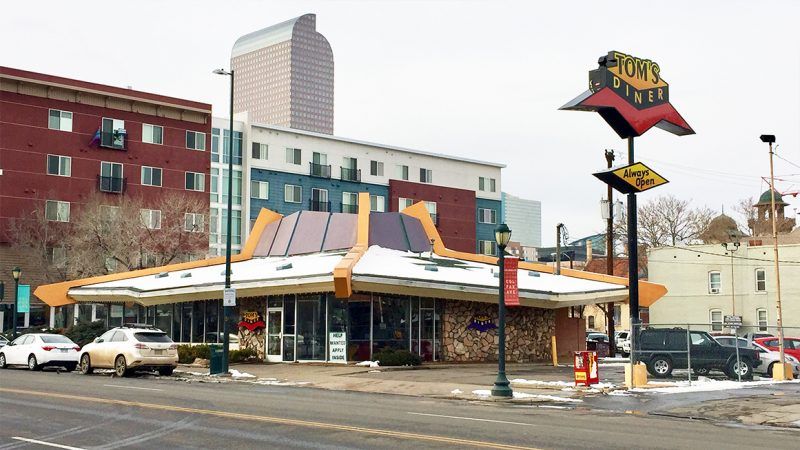 For the past 20 years, Tom Messina has run Tom's Diner, a popular 24-hour eatery in Denver, Colorado. After two decades behind the grill, Messina decided to hang up his apron and retire.

"I'm a restaurateur who's worked his life flipping pancakes and selling eggs. I have a beautiful family I want to spend time with," says Messina, 60.

Local developer Alberta Company offered to buy Tom's Diner for $4.8 million in order to redevelop the site into an apartment complex. Messina planned on pocketing the money and enjoying some quality time with his grandkids. It was shaping up to be a win-win deal until five local activists filed an application in June to declare Tom's Diner a historic landmark. They argued that the mid-century "Googie" architectural style of Messina's building—with its expansive glass windows and tilted roof—was an iconic part of Denver's landscape.

This posed a problem for Messina: Landmarking his building would not only sink the deal he had with Alberta; it would also greatly reduce what he could get from any other developer in a future sale.

In July, the city's Landmark Preservation Commission voted to approve the activists' application. Soon thereafter, a municipal committee voted to proceed with the effort. Only one more vote from the full Denver City Council was needed to officially landmark the property.

But public opinion was on Messina's side even if the government was not. Activists' efforts attracted negative coverage from both local outlets and national publications, including Reason. The Denver Post editorial board weighed in to support the restaurateur as well.

The public shaming seemed to work. Just a few days before the final vote, preservationists suddenly withdrew their application, allowing the redevelopment of the site to proceed without interruption.

For Messina, the result was a huge relief. But the experience was also a warning about how little control one can have over a property one ostensibly owns. "Many times it felt like the cards were stacked against me in this process," he said in a statement. "To have your life's work, investment, and future in the hands of others is a position I wish upon no one."

Messina can now retire in peace. But so long as expansive historic preservation laws remain on the books, the next property owner might not be so lucky.