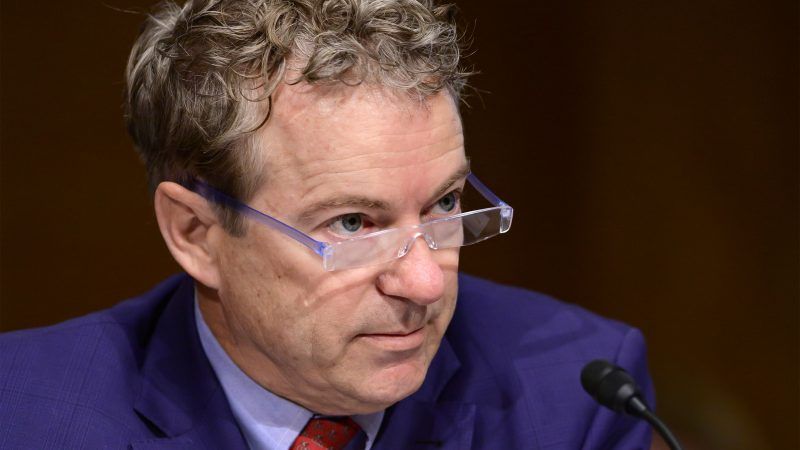 President Donald Trump "has great courage" and "faces down the fake media every day," said Sen. Rand Paul (R–Ky.) on Monday. At a Trump 2020 rally in Lexington, Kentucky, Paul called upon media to out the whistleblower who first raised objections about Trump's July call with Ukrainian President Volodymyr Zelenskiy. Paul also asked colleagues in Congress to make both the whistleblower and Joe Biden's son Hunter testify.

Paul's enthusiastic and near perpetual support for Trump actions continues to bum out many libertarians—who had hoped Rand would turn out more like his father, former Rep. Ron Paul—and limited-government conservatives, for whom the Kentucky senator was a bright spot back when the Tea Party movement showed promise and principles. In the #MAGA era, Paul has become one of the biggest cheerleaders of Trump-style Republicanism and a tireless defender of the president's perspective.

"Glad Rand Paul could find a purpose in Washington once it became clear that the right doesn't care about the size of government," quipped HotAir blogger and anti-Trump conservative Allahpundit yesterday. "Nothing says 'libertarian' like [checks notes] intimidating people who allege abuses of government power."

"I am seriously struggling to find consistency between the purported libertarian philosophy of Rand Paul and his desire to place a lawful whistleblower in harm's way," tweeted national security lawyer and legal pundit Bradley Moss.

Even Rep. Justin Amash (I–Mich.)—one-third of the once libertarian-leaning Republican trio that included Rand Paul and Kentucky Rep. Thomas Massie—had what seemed to be a criticism of Paul's Trump rally comments. On Monday night, Amash tweeted:

Paul himself was once a more robust defender of whistleblowers and advocated expanding protections for them. Back in 2014, Paul told a Campaign for Liberty conference audience that he was considering ways to "expand the whistleblower statute to government contractors," not just employees. "We've got so many millions of government contractors that when they see something wrong, they should be able to report it without repercussions," he said.

On Monday night, Republican 2020 presidential candidate Joe Walsh called on Paul "to have the courage to immediately find the other Rand Paul," the one Walsh "used to admire." He also accused Paul of being "emasculated by Donald Trump."

"I know this is gonna piss a whole bunch of people off but Nope. I'm done with Rand," tweeted libertarian podcaster Jen Monroe. "He's no different than any other garden variety Republican."

Paul still advocates against endless and unauthorized military intervention and is willing to vote against popular but flawed legislation (he was one of only two senators, for instance, to vote against the prostitution-ad criminalizing bill FOSTA last year). But Paul is also—seemingly increasingly—willing to look the other way when Trump acts contrary to constitutional principles and trashes free markets.

A teen's joking post about taking out a hit on a high school staffer prompted Pasco County, Florida, to arrest him on charges of solicitation to attempt murder. At a press conference, Pasco County Sheriff Chris Nocco said "it doesn't matter what the intent was. When you do it and post it on social media, the crime is committed."

Nocco admitted that law enforcement knew of no actual problem between the teen and the staff member and that they believe the teen had no intent to carry out the crime, nor the means to fork over a $100,000 payment for the hit.

Surprising no one who has been in corporate meetings…

Microsoft Japan gave its employees a four-day workweek (with five days' pay), and it also made a bunch of meetings half as long. Productivity grew by 40%. https://t.co/758J5z7Yy9

CORRECTION: This post previously misidentified the defendant in the Delaware massage parlor case as a woman.