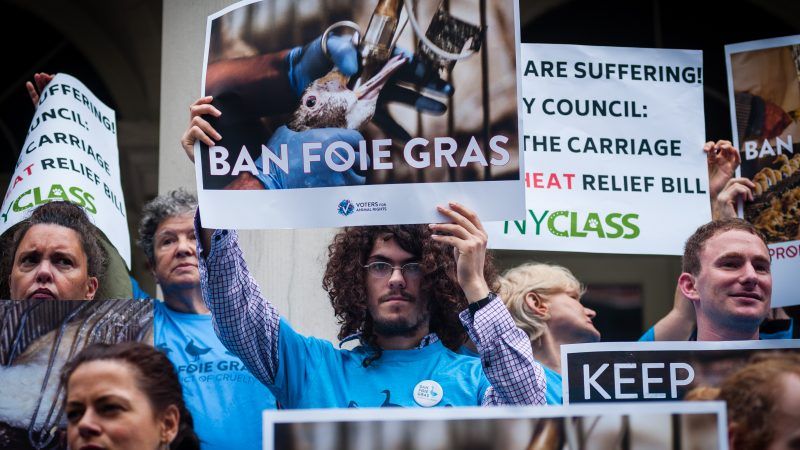 Earlier this week, to the great disappointment of me and many others, the New York City Council voted 42-6 to ban foie gras. The foolhardy ban is set to take effect in 2022.

Foie gras, a delicacy, is a French term for fatty duck or goose liver. Farmers fatten the birds' livers through a feeding process known as gavage, which capitalizes on the birds' natural instinct to gorge themselves before migrating.

"This is one of the most violent practices and it's done for a purely luxury product," Rivera told The New York Times this week, presumably intending to refer to foie gras production but instead doing a fine job of describing the city council's shameful efforts to ban a food.

The foie gras ban, while thoroughly disappointing, didn't come as a surprise. In August, I warned (as the headline of this very column suggests) that New York City's status as a global culinary capital would be at risk if the city followed through with plans to ban foie gras.

Neither is New York City's ban the nation's first. That dishonor goes to Chicago, where a moronic, short-lived foie gras ban was passed and repealed during the aughts by city lawmakers who ultimately recognized their mistake.

California is the first-and-only state to implement a ban. That prohibition continues, though I both hope and expect a federal court will kill it eventually. (Last year, I wrote and submitted a joint amicus brief on behalf of the Cato Institute and Reason Foundation—which publishes Reason—asking the U.S. Supreme Court to overturn California's ban. The Court failed to take up the case, which sent the matter back to a federal court in California.)

Notably, Intro 1378 also "creates a rebuttable presumption that any item with a label or listed on the menu as 'foie gras' is the product of force-feeding." That requirement suggests the city council expects a restaurant or grocer in the city to know every detail about how animals are raised and slaughtered outside the city—whether in Upstate New York, Canada, France, or elsewhere.

Acquiring such knowledge would require chefs or grocers to visit their foie gras producer. And that's exactly the sort of trip many New York City chefs have completed time and again.

"I have been to their farms and they operate with the utmost integrity to their farm animals," award-winning New York City chef Ken Oringer told Time this week.

Ironically, though, it's a trip New York City lawmakers like Rivera were too lazy or disinterested to make.

"How can the New York City Council pass legislation potentially destroying hundreds of jobs without due process?" wonders Marcus Henley, manager of Hudson Valley Foie Gras, the state's primary foie gras producer, in an email to me this week.

Indeed, Henley invited Rivera and other city council members to tour the HVFG facility at any time.

"The farms are two hours outside New York City and not a single member of the Council or their staffs came to the farm to see the farming practice," Henley says. "They accepted the word of the animal activists. That works if you don't want the truth to get in the way of your politics."

"Not one came or sent veterinarians to the farms to check the animal husbandry," Ariane Daugin, owner of D'Artagnan, which sells foie gras and other food products in New York City and around the country, also told me this week. "They relied solely on YouTube videos from factory farms in Eastern Europe, and on the lies of animal activists who fraudulently financed their political campaigns."

(An animal-rights group that pushed for the New York City ban also sued D'Artagnan this week, alleging the company's portrayal "of foie gras products as humane" is deceptive. That's hogwash, says Daugin. "For these activists, killing animals for meat consumption is inhumane," she tells me. "For us omnivores, 95% of the American population, it's lunch time. The key is to respect the animals, raise them ethically without stress nor pain, for maximum flavor. That's what D'Artagnan has been promoting for the last 35 years.")

Why would city council members make up their own minds, I guess, when animal-rights groups can do it for them?

Despite their righteous outrage and disappointment, HVFG and other foie gras producers and sellers aren't taking the ban lying down. They've already banded together to oppose it. And with three years' time before the ban is set to take effect, they have both their work cut out for them and time to complete it.

"We will fight," Daugin told me this week. "This law is anti-constitutional, and voted by an incompetent and corrupted NY Council."

Apart from litigation, New York City's top chefs will also play a key role in the fight to overturn the ban. They'll have to fight for their rights (and those of their customers) if they want to keep serving foie gras past 2022. Thankfully, a chef-led backlash against the ban is already resonating.

"Food choice is everything and the beauty of our country is that we can make the choice to eat what we want to eat," Chef Oringer told Time.

That freedom to choose what to eat is now under direct assault from New York City lawmakers.