Judged by his own yardstick, the president has failed because he hasn't delivered on his promises to voters. 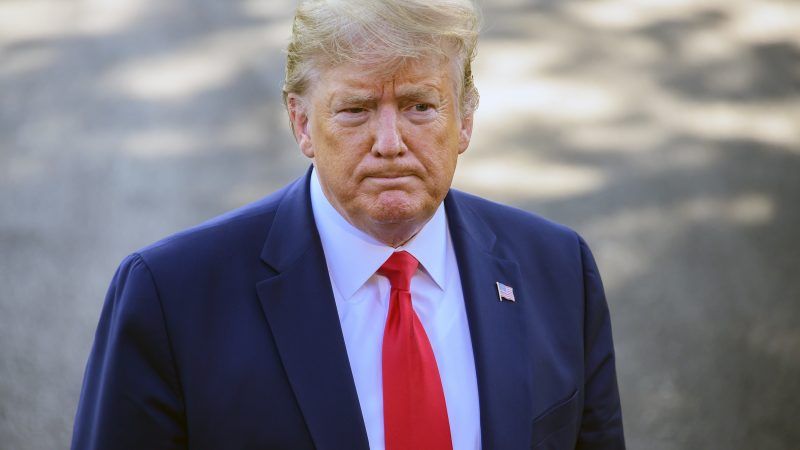 Candidate Donald Trump memorably promised to "bomb the s—" out of ISIS in 2015. And on that single count, President Trump has delivered: Although the Islamic State was already on the run before he assumed office, U.S. Special Operation Forces this past weekend killed ISIS leader Abu Bakr al-Baghdadi, dealing a body blow to the outfit. (Getting Baghdadi was never a stated priority of Trump's, but let's be generous.)

Unfortunately for Trump, bombing ISIS is one of the rarest of Trump phenomena: a vow he has actually delivered on. The Republican National Committee has created an entire website touting Trump's "promises made, promises kept." Surely it jests.

Trump pledged to boost growth, balance the books, build a wall, slash America's trade deficit (particularly with China), renegotiate the Iran deal, and denuclearize North Korea. To the extent that he has delivered on the first, it is by cheating. On all the rest, he's failed miserably. That's not necessarily bad for the country, but it does confirm he's a fake.

Trump boasts that America's economy is "incredible" and "setting records on virtually every front." In his telling, his combination of tax cuts and deregulation—what he refers to as his "magic wand"—has stimulated both the GDP and job growth.

But Michael Strain of the conservative American Enterprise Institute points out that Trump's economy is a continuation of Barack Obama's. The GDP grew at 4 percent during several quarters while Obama was president, although it had slowed to around 2.2 percent by the time he left office. After Trump arrived, the pace picked up, reaching 3.5 percent last year before falling to 2 percent this summer. As for jobs, during the final 19 months of the Obama presidency, the economy added 208,000 on average each month, compared to 189,000 jobs per month under Trump's first 19 months in office. (The jobs report this morning shows that the U.S. economy is continuing its job-growth streak.)

Indeed, government spending has jumped 22 percent on Trump's watch. He has boosted America's obscene level of military spending. And to get Democratic buy-in, he has signed off on most of their spending demands.

The upshot is that instead of eliminating the budget deficit "fairly quickly," as he had promised, Trump has grown it to nearly a trillion dollars, putting America even further down the road to bankruptcy, just as he has done with many of his businesses. Stunningly, the deficit is now 50 percent higher than when he assumed office. America's total government debt, meanwhile, has touched a whopping $22 trillion, bigger than the entire U.S. economy, which means that future generations will have to pay for Trump's tax-cut-and-spend policies.

The budget deficit is not the only deficit that Trump has widened. The trade deficit is ballooning as well.

Unlike a budget deficit, a trade deficit is not necessarily a bad thing. But Trump believes that it is a scorecard that determines whether a country is "winning" or losing—with a big deficit indicating that other countries are making more money because they are selling us more. This is hilariously wrong. Everyone has a trade deficit with their local grocer, because they only buy from him and don't sell anything back. But that does not mean they're poorer for it. It only means they prefer to not starve rather than horde their cash. Furthermore, foreign exporters reinvest their dollars in America, by buying either the country's ginormous debt (which lowers the cost of financing it) or private assets (fueling economic expansion).

So the trade deficit that Trump is obsessed about cutting has been very good for America. Yet Trump is hell-bent on eliminating it, even launching his ill-advised trade war with China to do so.

Has it worked? No. The opposite.

America's deficit has widened from $503 billion to $628 billion since Trump assumed office. America has a bigger trade deficit with virtually every trading partner, but especially China. The Middle Kingdom has responded to Trump's tariffs on Chinese goods with its own tariffs on American goods, slowing America's exports even more. Trump's tax cuts meanwhile have stimulated demand for cheap Chinese goods.

If there is less than meets the eye to Trump's allegedly stellar economy and trade policy, there is virtually nothing to see when it comes to his "big, beautiful" wall. He dropped his pledge to make Mexico pay for it right off the bat. And his every subsequent scheme to gin up wall funding has failed.

The brilliant negotiator overplayed his hand with Congress and torpedoed a deal on the table that would have given him money for the wall in exchange for legalizing the DREAMers (people who have grown up in this country as Americans without proper papers). But Trump demanded a 40 percent cut in legal immigration, prompting Democrats to walk. He then tried to declare an emergency on the border to justify raiding military funds for his wall. But the courts have put the kibosh on that scheme for now. All in all, he has managed to replace 57 miles of existing "barrier" and build nine miles of a new secondary barrier, a far cry from the 2,000 miles he'd said he'd build in the first year of his presidency.

And then there is Trump's disastrous diplomacy.

He tore up Obama's nuclear deal with Iran, denouncing it as "defective to its core," and embarked on a strategy of "maximum pressure." This involved reimposing an economic embargo barring Iran from selling oil, its main export, not only to the United States but to other countries as well. Trump even withdrew the waivers that a few countries had received to purchase Iranian crude oil. Trump's hope was that such economic warfare would either bring the mullahs back to the negotiating table to settle for some tougher terms or prompt the Iranian people to overthrow them.

What has happened is that Iran has started re-enriching uranium beyond the limits allowed under the Obama deal. This means it could acquire a nuclear weapon much faster, thanks to Trump. Iran has also shot down an American drone, sabotaged several oil tankers passing through the Strait of Hormuz, which it controls, and, then, in a dazzling display of its potential for destruction, attacked major Saudi oil facilities, knocking out that country's supply for several days.

All of this has brought the two sides close to the brink of war. Trump has himself admitted that he called off a retaliatory military strike against Iran literally from mid-air. But last week he once again warned that "if Iran does something, they'll be hit like they've never been hit before."

Nor are things going much better with North Korea's Kim Jong Un, whom Trump had once threatened with "fire and fury" but is now feting and flattering. But the only tangible result of this perplexing switch in tactics is that Kim has fired off about 18 missiles. And these aren't "very standard" short-range missiles, as Trump makes them out of be. They are new, mobile-launched, fast-moving projectiles that fly very low and are super maneuverable, making it more difficult to spot them or shoot them down. Since his last love fest with Trump in Singapore last year, Kim has also generated enough fuel for roughly a dozen new nuclear weapons.

So to recap: Trump has made America's economy better by making its fiscal incontinence worse, he has grown the trade deficit, he has made little progress on building his wall, he is on a warpath with Iran, and his charm offensive with Kim Jong Un has generated personal love letters but not stopped that brutal dictator from proceeding apace with his nuclear ambitions.

Trump deserves some credit for getting al-Baghdadi. But otherwise, on his own terms, Trump's presidency is shaping up to be a near zero.