The Other '80s Blade Runner Movie

Friday A/V Club: Ridley Scott wasn't the only director who filmed a Blade Runner in the Reagan years. 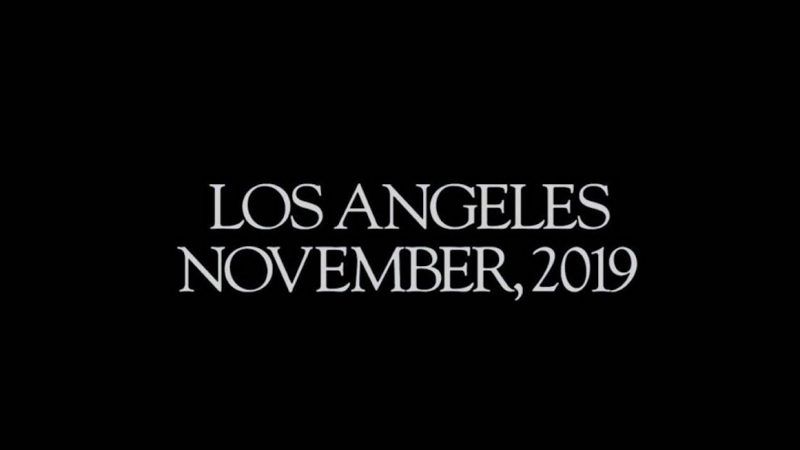 Keep an eye out for replicants. Ridley Scott's film Blade Runner is supposed to take place in November 2019, and November 2019 begins today. In honor of that, the Friday A/V Club is pleased to present the other '80s Blade Runner movie.

What—you thought only one Blade Runner movie came out in the 1980s? Pull up a chair, and I'll tell you the tangled tale of Taking Tiger Mountain.

The key thing to understand here is that Blade Runner took its title and its story from entirely different sources. The script is based on Philip K. Dick's 1968 novel Do Androids Dream of Electric Sheep? The title comes from The Bladerunner, a potboiler published in 1974 by Alan E. Nourse. I haven't read the Nourse book, but here's how Abraham Riesman described it in Vulture: 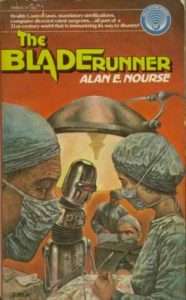 It's the near future, and eugenics has become a guiding American philosophy. Universal health care has been enacted, but in order to cull the herd of the weak, the "Health Control laws"—enforced by the office of a draconian "Secretary of Health Control"—dictate that anyone who wants medical care must undergo sterilization first. As a result, a system of black-market health care has emerged in which suppliers obtain medical equipment, doctors use it to illegally heal those who don't want to be sterilized, and there are people who covertly transport the equipment to the doctors. Since that equipment often includes scalpels and other instruments of incision, the transporters are known as "bladerunners."…

Billy is a bladerunner, Doc is a doctor who does legal and illegal work, they live in the greater New York metropolitan area (one way in which the novel coincidentally resembles Blade Runner is the setting of a massively overbuilt city where people are often transported via flying car), they run into trouble with the law, they race to stop an epidemic, and their virtue is rewarded by a change in national policy that makes their brand of medical care legal. 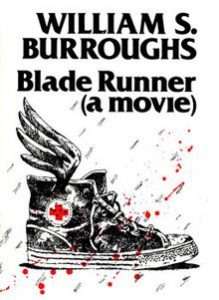 Nourse's thriller caught the eye of the Beat writer William Burroughs, who decided to turn it into a "film treatment." I put "film treatment" in quotes because you'd have to look long and hard in Hollywood to find anything resembling the bizarre experimental text that Burroughs assembled. In addition to bearing little resemblance to an ordinary treatment, the work bears little resemblance to Nourse's novel (or at least to Riesman's summary of it): The dystopian politics and medical horrors are still there, but now there's gay sex and time travel too. Deemed unfilmable, Burroughs' text was instead shipped to bookstores in 1979 under the title Blade Runner (a movie).

Now jump back to 1974. While Nourse was publishing The Bladerunner, a filmmaker named Kent Smith and a teenage actor named Bill Paxton were traveling around Wales with some rented movie equipment, shooting a scriptless film vaguely inspired by the kidnapping of J. Paul Getty III. Years later, after Paxton was an established movie star, he told Variety about the experience. "We had purchased black-and-white [film stock] from the film Lenny, and we sort of shot things as we came across them," he remembered. "One guy had a Kenyan vulture, so we used that for a scene of eating my entrails. We met some girls and talked them into doing some nude scenes with us. Basically it was a bunch of hippies running around naked. It was all silent, black-and-white footage."

Smith and Paxton acquired hours of material this way, but they eventually had to confront the fact that they didn't have anything resembling a story. So their work sat around incomplete for years—until another director, Tom Huckabee, got his hands on the footage and on the film rights to Burroughs' text. He shot some more material, added some voiceovers drawn partly from the Burroughs book, and edited it all into an indie feature called Taking Tiger Mountain.

And where did he get that name? From Taking Tiger Mountain by Strategy, one of the eight "model operas" that were allowed to be performed in China during the Cultural Revolution. So now, when you play Six Degrees of Kevin Bacon, you'll know the quickest route from Bill Paxton to Chairman Mao. And from J. Paul Getty to Philip K. Dick. You're welcome.

Taking Tiger Mountain was released, just barely, in 1983, a year after Scott's Blade Runner. I despair at the thought of trying to summarize it, so I'll just quote the IMDb:

In a dystopian future, Europe is unified under a totalitarian patriarchy, where each town is assigned a single economic purpose. In Brendovery, Wales the occupation is prostitution. Arriving by train from London is Billy Hampton, a young American expatriate and draft evader (Bill Paxton in his first lead role), ostensibly there to enjoy a sex-filled holiday. Unknown to him he is a time bomb assassin, programmed by a feminist terrorist cell to assassinate the local minister of prostitution.

That makes it sound rather more coherent than it really is, but it should give you the gist.

A restored version of Taking Tiger Mountain has been playing at film festivals this year, and if you want to see the picture in its full glory you can either make your way to one of those screenings or stream it for a fee at this link. If you'd rather watch the much muddier-looking '83 version, it's embedded below. I can't say it's for all tastes, but you might get some pleasure out of it if you like hallucinatory dystopian visions. Or if you're a Burroughs completist. Or if you're just curious about what Bill Paxton looked like when he was 19 and naked.