Cops Destroyed This House To Arrest a Shoplifter. A Federal Court Says Police Don't Have To Pay for the Damage.

Are there any limits to what police can do in pursuit of a suspect? The 10th Circuit Court of Appeals apparently doesn't think so. 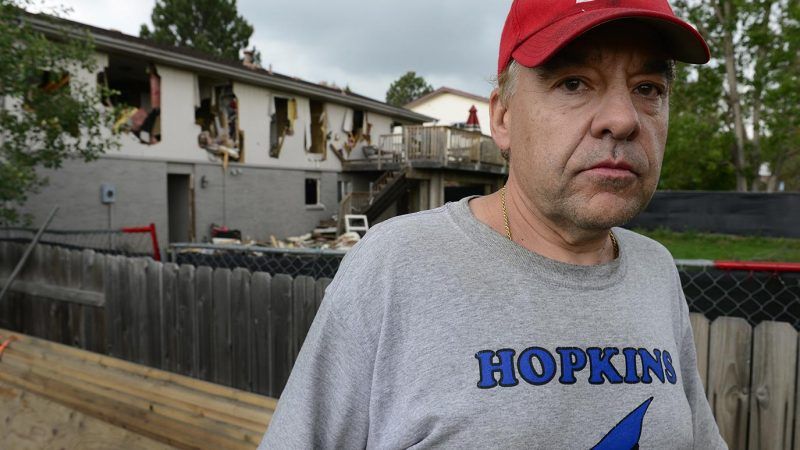 A federal appeals court ruled this week that the Colorado man who had his home destroyed by a police raid in 2015 is not entitled to compensation for the damage, which was severe enough to require a complete demolition of the house.

"Under no circumstances in this country should the government be able to blow up your house and render a family homeless," Leo Lech, the homeowner, told NPR after the court ruling on Wednesday.

The raid that left Lech and his family homeless had nothing to do with any of them. They weren't even home when an armed shoplifter broke into their house on South Alton Street in the leafy Denver suburb of Greenwood Village. Although the burglar was armed only with a handgun and was fully barricaded inside the home, local police responded as if they were confronting Osama bin Laden.

"Unleashing a display of force commonly reserved for the battlefield, the tactical team bombarded the building with high-caliber rifles, chemical agents, flash-bang grenades, remote-controlled robots, armored vehicles, and breaching rams—all to extract a petty thief with a handgun," wrote Jay Stooksberry in the December 2017 issue of Reason. At one point during the two-day operation, the cops drove an armored vehicle through the home's front door. When it was all over, the house was unlivable. Greenwood Village condemned the structure, forcing Lech to have it torn down, and the city offered a measly $5,000 to cover the damage.

That prompted Lech's lawsuit, which has been winding its way through federal court for several years. Lech claimed the city was liable because of the Constitution's takings clause, which forbids governments from taking private property for public use without "just compensation."

A federal district court ruled in 2016 that the city wasn't liable. The 10th Circuit Court of Appeals agreed; in the ruling issued Wednesday, three judges said police cannot be held liable for damage caused while trying to apprehend a suspect.

"The defendants' law-enforcement actions fell within the scope of
the police power and actions taken pursuant to the police power do not constitute
takings," the judges wrote.

Lech did get a $345,000 payout from his homeowner's insurance, but that was not enough to cover the full value of the home, which was appraised for $580,000. And this payout did not cover the costs of demolition or the loss of other property inside the home. Lech ended up having to take out a $390,000 loan to cover the costs of rebuilding, Stooksberry reported in 2017.

Lech and his attorneys told The Denver Post that they plan to appeal the decision to a full panel on the 10th Circuit Court of Appeals and could eventually take the case to the Supreme Court.

In a statement to the Post, Greenwood Village's attorney pointed to a review of the incident conducted by the National Tactical Officers Association, a nonprofit that trains SWAT teams. The police raid that destroyed Lech's home, the group concluded, was carried out in "in a highly commendable manner."