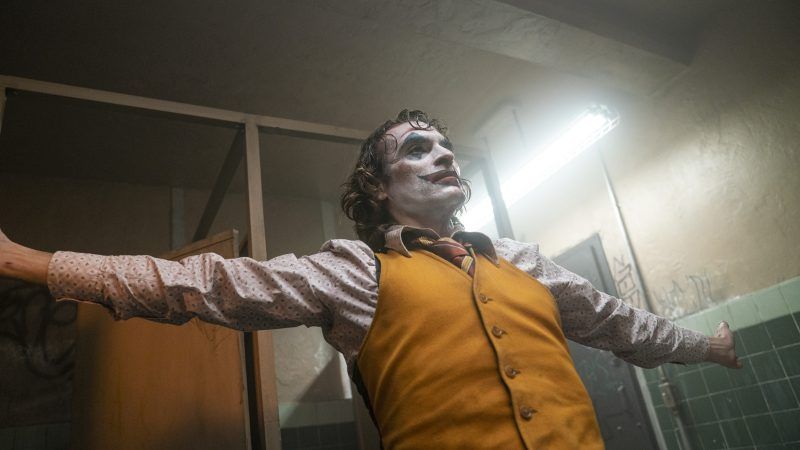 Well before its official release, Joker already had an armlock on our attention. The movie's trailer made clear that this was not another slick comic-book epic, but rather a grim, R-rated story of homicidal madness set in the bad old New York (well, "Gotham") of the early 1980s. And it was immediately apparent that the picture's star, Joaquin Phoenix, was up to something unusually interesting.

Now, at last, the movie is here, and Phoenix gives, as expected, a bombshell performance as Arthur Fleck, the tormented protagonist, whose miserable tics and twitches never abate, and whose journey—his horrid mutation into Gotham's cackling scourge, the Joker—is the picture's dismal subject.

The movie gets off to a strangely muted start, and even fans of the DC comics in which the demented clown has been giving Batman so much guff for the past 80 years may grow restless. The film takes its time demonstrating Arthur's many problems (among other things, social-service budget cuts have deprived him of the several medications he must take for his mental instability) and sinking us deep into this dank and rancid world.

There are a lot of laughs along the way, but they all emanate from Fleck, who has a neurological disorder that causes him to break into sudden storms of laughter at the most inappropriate moments. (He carries cards that explain his problem: "I have a condition"). But the movie gives us nothing to laugh about—or even smile about, really—since its only non-basket-case characters are Sophie Drummond (Zazie Beetz), a sweet single mother whom we see bestowing on Fleck the only uncomplicated affection he's ever experienced, and a kindly dwarf named Gary (Leigh Gill), an employee of the same tacky rent-a-clown operation where Arthur works. (We see Arthur in big floppy boots and a cap of clown hair dancing around on the sidewalk in front of a store, waving a going-out-of-business sign.)

Director Todd Phillips (purveyor of the Hangover movies) and production designer Mark Friedberg have created a hell-pit Manhattan of rats and trash and roiling, rain-lashed streets that beats Arthur down at every turn. He's stomped in an alley by a pack of feral kids, and on a subway car by a trio of drunken stock-market louts (employees of a company called Wayne Investments, hold that thought). When a coworker gives Arthur a pistol to defend himself, we know that downward is the only direction in which this already bleak story is likely to go.

Arthur still lives with his loosely wrapped mom, Penny (Frances Conroy), in a dingey apartment where they while away time watching a popular talk show hosted by the smug Murray Franklin (Robert De Niro). Arthur has long harbored the impossible dream of being a standup comic—now, suddenly, that dream comes true. After trying out his pitiful act at a comedy club open-mike night, a tape of Arthur's disastrous performance makes its way to Murray, who plays it on the air as an exercise in pointless cruelty. But viewer response is enthusiastic, and Murray is compelled to invite Arthur to come on his show.

This aspect of the story is of course an upside-down reference to Martin Scorsese's 1982 film, The King of Comedy, in which De Niro played the delusional loner with the unlikely showbiz dream and Jerry Lewis was the frosty talk-show host. In fact, Phillips's whole movie can be read as a salute to Scorsese and De Niro: the scuzzy exteriors are highly reminiscent of Scorsese's 1976 Taxi Driver—another tale about a combustible loner—and even the name of De Niro's character here, Murray Franklin, seems like a nod to a pair of streets in Manhattan's Tribeca district, where De Niro has long presided over an annual film festival and also runs a number of restaurants (one of them on Franklin Street).

When the movie finally does start to coalesce, we see that it actually is an origin story, although not of the superhero sort to which we've become accustomed. There's an eruption of bloody violence in which some well-to-do people die; a clown is seen fleeing the scene. Suddenly the city is filled with clowns, as a long-delayed popular uprising breaks out and signs begin to blossom in the streets: "We Are All Clowns," "Kill the Rich." We meet the financier Thomas Wayne (Brett Cullen), who is running for mayor on a promise to reverse Gotham's slide into civil ruin. But Wayne's candidacy only stokes the popular revolt. ("Those of us who have made something of our lives," he says, affixing a target to his chest, "will always look at those who haven't as losers.")

Arthur comes to believe that he and Wayne have a secret connection. Showing up unannounced at Wayne Manor, he has an uneasy conversation, through a barred gate, with Wayne's young son Bruce (Dante Pereira-Olson), and then an angry confrontation with the family butler (Douglas Hodge). As the movie proceeds toward its climax, there's a startlingly gruesome assault, and then another one, as Arthur comes into his destiny.

As appropriately dark as the movie is, no one of sound mind is going to be driven to murder or mayhem by it. (I'm not sure I'd want to watch it sitting next to someone seething on the edge of sanity, however.) The movie's unrelenting darkness is occasionally monotonous, but the picture has some standout supporting performances (Zazie Beetz is virtually a burst of sunshine whenever she shows up) and a mesmerizing score by Icelandic composer and cellist Hildur Guðnadóttir that suggests deep tidal currents. The prospect of unnecessary sequels is always dismaying; but Joaquin Phoenix is so good here, and the movie's plot structure is so inventive, that you could find yourself actually wondering what might happen next.