Federal drug prohibition played a big role in creating the opioid crisis. Unfortunately, the government is also slowing the spread of one possible solution to it. 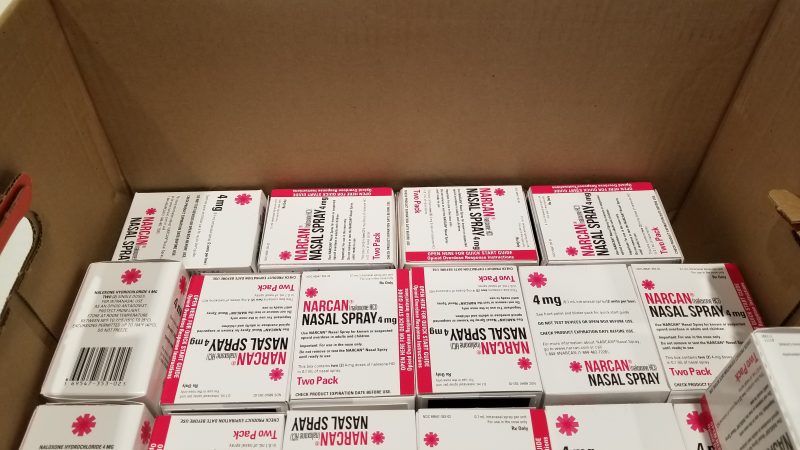 As demand for black market opioids has increased in response to the reduced availability of prescription opioids, there's been a corresponding spike in the use of illicit fentanyl, which is 50 times more potent than heroin and widely available on the street. A powerful drug being marketed as a less powerful drug has produced a corresponding increase in overdose deaths—48,000 Americans overdosed on opioids in 2017, according to the U.S. Centers for Disease Control and Prevention (CDC), with synthetic opioids like fentanyl responsible for 29,000 (and likely more) of those fatalities. While the overall number of overdose deaths has doubled since 2013, the number of deaths resulting from the use of synthetic opioids has increased ninefold.

Federal drug prohibition played a big role in creating this mess. Unfortunately, the federal government is also playing a role in limiting the availability of naloxone, a drug that blocks opioid receptors and can reverse an otherwise fatal overdose.

"Everyone agrees—no matter where they stand on the drug war—everyone agrees this is a lifesaver," says Jeffrey Singer, a medical doctor and senior fellow at the Cato Institute.

Singer, who has written previously for Reason and has co-authored a paper with Reason's Jacob Sullum, co-hosted an event on Wednesday for congressional staffers in the hopes of jump-starting an apparently stalled effort to get naloxone to be approved for over-the-counter sales (something that many other countries already allow). If the FDA changes the designation for naloxone, it could be sold in more than 750,000 retail stores across the country, or even out of vending machines. That would mean better, easier access to a life-saving drug for the people who are most likely to need it: those using heroin or illicit fentanyl in public spaces without access to a pharmacy.

For now, Naloxone is available in most states by going to a pharmacy and asking for it, no doctor's prescription needed. The drug is easy-to-use and can be safely administered without training—either in the form of a nasal spray (sold under the brand name Narcan) or an intramuscular auto-injector (Evzio). The drug was first approved by the FDA all the way back in 1971.

"There are a lot of people, because of the stigma attached to opioid use in general, who are hesitant to go up to the counter," says Singer. "Just being able to take it off the shelf with a box of Band-Aids and take it up to the counter—or, better yet, to pay a robot in the form of a vending machine."

There are some who worry that such widespread access to naloxone could create a moral hazard. That is, if it becomes easier to avoid a deadly consequence, more people might be willing to engage in dangerous behavior, like doing heroin, in the first place. That was the stated reason why, for example, Maine's Gov. Paul LePage (R) vetoed a bill allowing pharmacists to dispense naloxone (the state legislature overrode his veto).

Studies into whether those fears are grounded in reality have been mixed. While some have found an increase in opioid-related emergency room visits after access to naloxone was expanded in some states, others have found a reduction in opioid-related deaths. A study published in the journal Addictive Behavior found that opioid use generally declined among individuals who used or have been trained to use naloxone—suggesting that close brushes with death discourage drug use.

So why isn't naloxone available over-the-counter? The FDA isn't entirely at fault. The agency has actually been asking drug companies to petition them for a reclassification of the drug. But under FDA rules, the agency doesn't necessarily have to wait until the drug companies ask for that change. Technically, any "interested person" can request a review, or the FDA commissioner can institute one preemptively.

The FDA has worked to raise awareness about naloxone. In 2018, Surgeon General Jerome Adams issued a statement encouraging more people to carry naloxone. Later that same year, the Department of Health and Human Services outlined guidance for health care providers and patients detailing how naloxone can help save lives. The FDA has even taken the unusual step of pre-approving an official "drug facts label"—something required for all over-the-counter medications—that can be slapped on packages of Narcan once naloxone is reclassified. Those are all encouraging signs, even against the backdrop of President Donald Trump's threats to double-down on failed "get tough" prohibition policies.

If the drug companies won't pick up the pace and get naloxone approved for over-the-counter sales—perhaps because they are worried that it would cause the drug's price to fall, something that often happens when drugs are made available over-the-counter—then acting FDA Commissioner Norman Sharpless should do it unilaterally. The agency does not exist to protect drug companies' profits; it exists to evaluate the risks of allowing wider access to certain drugs. In this case, opioid overdoses are an exponentially greater threat to Americans than the misuse of naloxone.

"The fact that you have to, in this country, go up to a pharmacy counter to get naloxone," Singer tells Reason, "is standing in the way of getting access to the people who need it."