Don't Worry, Partisan Politics Isn't Getting in the Way of Government Spending

Climate strikes, "Medicare for All," national security whistleblowers, and Canadian blackface scandals are all distractions from D.C.'s core function: spending more money than we have. 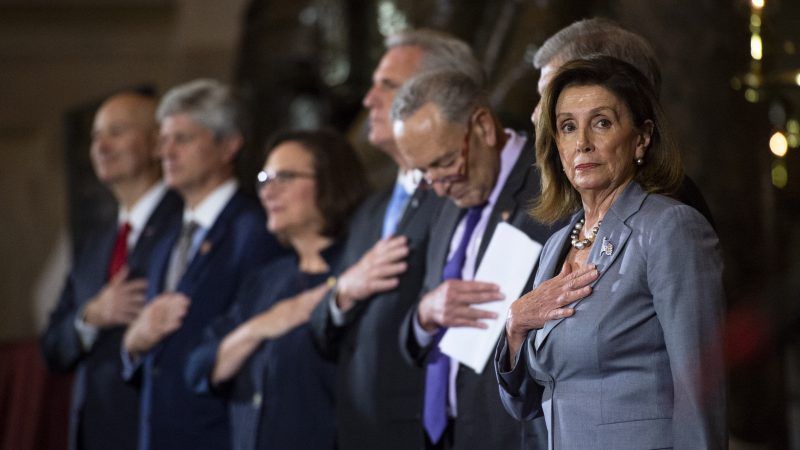 What's got your goat right now? Maybe it's all those climate-change strikes that are giving schoolkids cover for playing hooky on a beautful early Autumn day. Or maybe it's that we're not doing enough to combat climate change. Blackface is back in the news, thanks to Canadian Prime Minister Justin Trudeau's compulsion to impersonate other races. What else is going on? Unending modifications by Democratic presidential candidates to the theme of "Medicare for All." An intriguing and emerging possible scandal involving Donald Trump, the Ukraine, and interference in the 2016 presidential election. Or maybe it's actually an intriguing and emerging scandal involving the deep state trying to hamstring a president.

There isn't a day—an hour, really—that goes by where you can't lose yourself in breaking news or developments in all sorts of stories. Which is exactly how the people running the federal government probably want it. While we're outraged or flummoxed by the latest outrage du jour, the feds manage to keep spending more and more money that we don't have. The practice is so routine that only oddballs such as Rep. Justin Amash (I–Mich.) even bother pointing it out anymore:

Today, the House will pass another spending bill, which extends current, reckless spending levels until November 21. It also continues multiple corporate welfare programs. Democratic and Republican leaders support it, and the president is expected to sign it. I'll be voting no.

But hallelujah, the members of the House of Representatives put aside their deep divides on whatever to make sure the cash keeps flowing without any interruption. From CNN's account:

The House of Representatives on Thursday passed a bill to temporarily extend funding for the federal government and avert a shutdown at the end of the month.

The bill, approved 301-123, will extend funding at current levels with limited exceptions through November 21, potentially setting up an end-of-the-year showdown over government spending that could drag into the holiday season.

The Senate will need to pass the bill next for it to make it to President Donald Trump's desk for his signature.

The federal government's fiscal year ends on September 30. Through the first 11 months of the current fiscal year, the government managed to spend so much money that the deficit topped $1 trillion by the end of August. Not so long ago, it took a full year and a major economic downturn to produce so much red ink. Nowadays, we can do it simply through sheer will. The Wall Street Journal reports:

Higher spending on the military, rising interest expenses on government debt and weak revenues early in the fiscal year combined to push the deficit up 19% from October through August, compared with the same period a year earlier. Government spending climbed 7%, to $4.1 trillion, outpacing higher federal tax receipts, which grew 3%, to $3.1 trillion.

So as we're getting bent out of shape by an unending litany of outrages, annoyances, and ephemeral stories, just remember that there is in fact one great thing that both Democrats and Republicans, liberals and conservatives, agree on: We can always spend more money.

Bonus video: Here's a primer on the problems with deficit spending. The short version is that it reduces economic growth, misallocates resources, and will eventually cause inflation, higher taxes, major disruptions in programs that people rely on, or some toxic mix of all those things.