Again and again, the president tried to interfere with the Mueller investigation in a roundabout way. 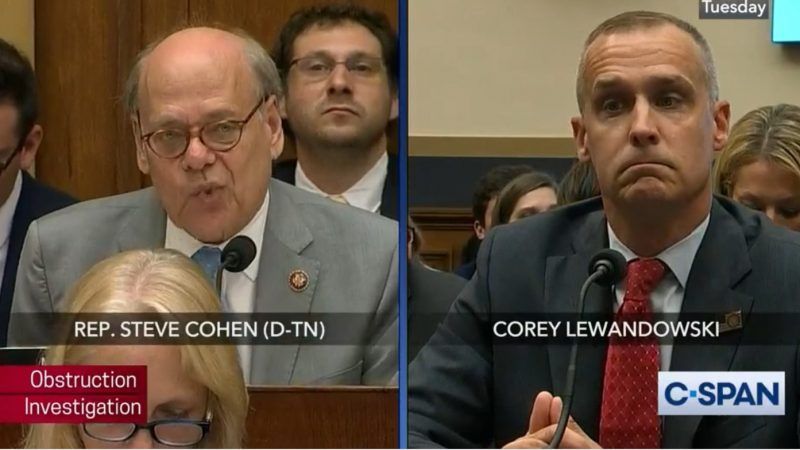 Testifying before the House Judiciary Committee yesterday, former Trump campaign manager Corey Lewandowski confirmed a bizarre episode described in Special Counsel Robert Mueller's March report on Russian attempts to influence the 2016 presidential election. On June 17, 2017, according to the report, Lewandowski had a one-on-one meeting with Trump in which the president dictated a message for Attorney General Jeff Sessions, asking him to publicly state that the Russia investigation was "very unfair" to Trump, who had done nothing wrong. The message also asked Sessions to tell Mueller that his investigation should focus on the threat of Russian meddling in "future elections."

One reading of that encounter is that Trump was trying to obstruct an investigation of his own attempts at obstruction, since such allegations were part of Mueller's charge. Another interpretation—the one endorsed by Attorney General William Barr before he took office and by Lewandowski yesterday—is that there was nothing inappropriate or illegal about Trump's arm's-length overture to Sessions, since the president is ultimately in charge of the Justice Department and can tell it to start, expand, narrow, or end investigations whenever he likes. But that take on the president's powers, which Mueller explicitly rejected, is hard to reconcile with Trump's furtive behavior.

"Didn't you think it was a little strange that the president would sit down with you, one on one, and ask you to do something that you knew was against the law?" Rep. Steve Cohen (D–Tenn.) asked Lewandowski.

"I disagree with the premise of your question, Congressman," Lewandowski replied. "I didn't think the president asked me to do anything illegal."

That much is consistent with the view that the president, regardless of his motives, cannot commit obstruction of justice by exercising his constitutional authority over executive-branch agencies. In an unsolicited memo that he sent the Justice Department before Trump picked him to replace Sessions, Barr conceded that the president can commit obstruction through "bad acts" such as destroying evidence or encouraging witnesses to lie. But he argued that the federal obstruction statutes do not reach "facially lawful actions taken by the President in exercising the discretion vested in him by the Constitution."

But if that is what Trump believed, why didn't he talk directly to Sessions? Why enlist a crony with no official role in the administration to deliver a message that Trump could have delivered on his own?

It's possible that Trump did not think there was "anything illegal" about trying to limit Mueller's investigation but recognized that such interference would look bad. Yet it looks bad for the same reasons it looks like obstruction, even if (accepting Barr's theory) it does not satisfy the elements of that crime.

That norm is aimed at avoiding the appearance that the president is meddling in law enforcement matters for personal or political reasons, a danger that is especially acute when the president himself is the subject of an investigation. Such abuses of power, even if they are technically legal, nevertheless might qualify as "high crimes or misdemeanors" justifying impeachment.

In addition to the Lewandowski gambit, the Mueller report describes several episodes in which Trump tried to influence, limit, or stop the Russia investigation, including his repeated attempts to have Mueller fired and to have Sessions, who had recused himself, take control. Those maneuvers were generally unsuccessful, mainly because Trump's subordinates defied his wishes. They clearly thought there was something wrong with his efforts to curtail Mueller's investigation. White House Counsel Don McGahn threatened to resign if Trump insisted on firing Mueller, saying he did not want to participate in a repeat of Richard Nixon's Saturday Night Massacre.

Trump himself seemed to understand he was doing something wrong, judging from his roundabout approach. If he was merely exercising his lawful powers in a perfectly proper way, for example, he could have directly instructed Acting Attorney General Rod Rosenstein to fire Mueller, rather than complaining to his aides about the special counsel's supposed conflicts of interest and asking McGahn to tell Rosenstein that Mueller had to go. As with the message for Sessions that he dictated to Lewandowski, Trump's sneakiness suggests consciousness of guilt—not necessarily legal guilt (again, if you accept Barr's theory) but certainly an awareness that there was something unseemly about all of this.

Rep. Justin Amash (I–Mich.), who was briefly the only Republican member of Congress to publicly say that Trump's was guilty of "impeachable conduct" ("briefly" because Amash left the party, not because he changed his mind), correctly noted that "high crimes and misdemeanors" extend beyond provable statutory violations to abuses of power that betray the public trust. Trump's own lawyer, Rudy Giuliani, last year conceded that it "would just be unthinkable" for Trump to pardon himself, which "would lead to probably an immediate impeachment," even though the Constitution imposes no limits on the pardon power. The question of whether the president did "anything illegal," while relevant, is only part of the debate about whether he abused his powers egregiously enough to justify impeachment.