Plus: Screen addiction is not really a thing and New Mexico embraces tuition-free college. 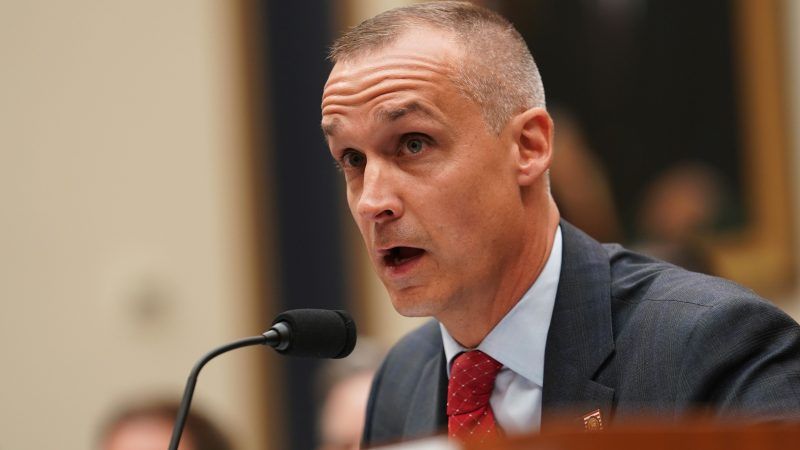 Former Trump campaign director Corey Lewandowski appeared before the House Judiciary Committee on Tuesday to answer questions about alleged obstruction of justice, collusion with Russia, and other unethical activity. But a defiant Lewandowski ran circles around frustrated Democrats, and the proceedings were largely a disaster for those who believe President Donald Trump's 2016 campaign should be held accountable for wrongdoing.

This was obvious even to congressional Democrats. Hank Johnson (D–Ga.) said at the hearing that questioning Lewandowski was like "a fish being cleaned by a spoon," which is not the go-to utensil for cleaning a fish, one gathers.

Democrats were left with a conundrum: how to use televised hearings to tease out damning passages of the Mueller report when Trump and his gang are determined to turn them into a circus.

Their broader strategy of using their House majority to slowly build a pattern of presidential abuse of power and obstruction of justice has yet to reach a critical mass. On the evidence of Tuesday, it may never do so.

It was a great day for the White House, however.

Its strategy of curtailing Lewandowski's testimony by foreshadowing controversial executive privilege claims appeared to be an attempt to goad Democrats into another protracted court battle that could delay a day of reckoning.

By sunset, Judiciary Chairman Jerry Nadler, D-New York, warned that Lewandowski risked being held in contempt, for helping a White House "desperate for the American people not to hear the truth."

Trump's army of Republican committee members, meanwhile, more eager to catch his eye as he watched on Air Force One than to honor their lawmakers' duty to constrain the executive, played along with Lewandowski, relishing the chance to grandstand.

"You had a pretty good candidate," said Rep. Jim Jordan, an Ohio Republican who's one of Trump's closest allies in Congress.

"The best," the ex-campaign manager replied.

Lewandowski essentially admitted to making false statements to the media, but he said this was justified because "they are just as dishonest as anybody else." The audience groaned:

The audience's disappointed groan when Lewandowski all but admitted he routinely lies to the media was to me the most memorable part of Tuesday's hearing pic.twitter.com/4nPcw1I0u6

This admission did not prevent the media—CNN, specifically—from bringing him on TV Wednesday morning to discuss the hearing.

Trump was apparently thrilled with Lewandowski, who is expected to announce his candidacy for New Hampshire's senate seat as early as next month.

Spending a lot of time on their phones, and on social media, does not increase anxiety among young people, according to a new study.

Candice Odgers, a professor of psychological science at the University of California-Irvine, found "no connection between the amount of time that young people spend online using digital technologies and mental health symptoms like depression, anxiety." Indeed, kids who sent more text messages tended to have better mental health.

This runs contrary to what some experts—most notably Jean Twenge—argue is a serious mental health crisis among "iGen," the generation that grew up with smartphones. But Odgers' findings make perfect sense when one thinks about what kids are actually doing on their phones: interacting with friends. The technology is merely a way for young people to stay more connected to the people who matter to them. We should not be so surprised that doing so makes them happier.

New Mexico Gov. Michelle Lujan Grisham, a Democrat, unveiled a plan to make college tuition-free for all state residents. According to The New York Times:

The move comes as many American families grapple with the rising cost of higher education and as discussions about free public college gain momentum in state legislatures and on the presidential debate stage. Nearly half of the states, including New York, Oregon and Tennessee, have guaranteed free two- or four-year public college to some students. But the New Mexico proposal goes further, promising four years of tuition even to students whose families can afford to pay the sticker price.

By some measures, the tuition initiative will be the most ambitious in a growing national movement. College costs and student debt have emerged as major issues in the Democratic presidential primary, with two of the leading contenders for the nomination — Senators Bernie Sanders and Elizabeth Warren — promising to make all public colleges and universities free. Former Vice President Joseph R. Biden Jr. has a more limited proposal to eliminate community college tuition.

Making college free and canceling all student debt are important policy proposals for the presidential campaigns of Sen. Elizabeth Warren (D–Mass.) and Sen. Bernie Sanders (I–Vt.). If implemented, they would cost anywhere from $1 to $2 trillion dollars.

Here I ask @HawleyMO about criticism from @DavidAFrench, @robbysoave, and @GeorgeWill that he is trying to use government power to solve cultural problems: https://t.co/LQjYa0Hjzx

Andrew Yang's use of Asian stereotypes is reinforcing toxic tropes.

His one-liners about "math" and "doctors" ultimately send a troubling message. https://t.co/aIDXQNH1YW

Oops. "The plan [to kill sea lions along the Columbia River] was proposed by Native American tribes and state officials in Oregon, Washington and Idaho, not by the National Marine Fisheries Service."https://t.co/e20a3e84n7 pic.twitter.com/M8iTTfOqG8