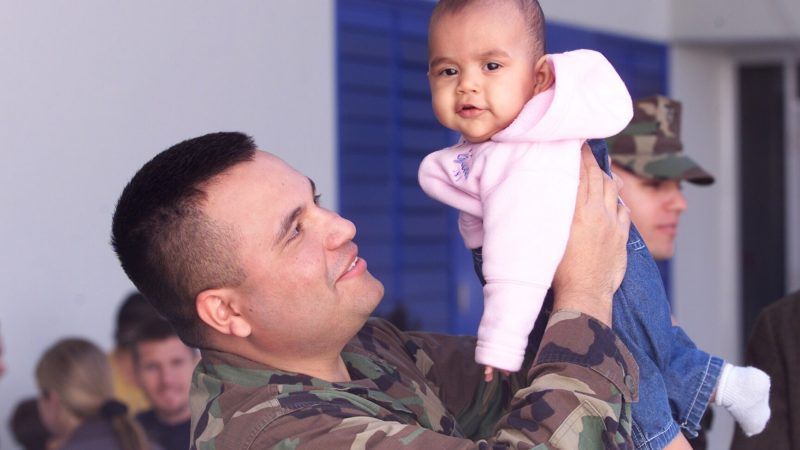 Attacking the 14th Amendment's guarantee of birthright citizenship for those born on U.S. soil is a perennial sport for politicians and pundits. In 1993, former Senate Majority Leader Harry Reid (D–Nev.) led a bipartisan effort to end birthright citizenship for children of undocumented aliens. Eighteen years later, the crusade was reignited by Republicans like Rep. Lamar Smith of Texas who was on a tear against the scourge of "anchor babies" that pregnant Mexican moms evidently rushed to America to deliver so that they would two decades later have someone to sponsor them for citizenship. Even a consummate NeverTrumper like George Will, a conservative-libertarian columnist, fell for the hysteria at the time and wholeheartedly backed Smith.

With this backdrop, U.S. Citizenship and Immigration Services (USCIS) last week rolled out—in an utterly ham-handed fashion—a new rule governing birthright citizenship of children born abroad to U.S. service members or government employees, widespread confusion and panic set in. Many people took the rule, set to go into effect on Oct 29, to be stipulating that kids born abroad—even to an American parent—would no longer be entitled to automatic citizenship as has been the case to date. Rather, they would be required to jump through many additional bureaucratic hoops.

As it turns out, that wasn't true. If one parent serving abroad is an American citizen, their kids would remain entitled to automatic citizenship. What is true, however, is that kids born to U.S. employees who are not already American citizens would face significant new hurdles, as would adopted and step-children of citizen employees.

This is how it'll work:

Currently, children born and living overseas to parents who are serving Uncle Sam are, for the most part, considered to be residing in the United States. Hence, citizenship laws basically work as if they were actually on U.S. soil. In the case of American parents, this means that if, say, the father is a citizen and has a child while abroad, so long as the father meets certain U.S. residence requirements—such as having lived in America for five years before the child's birth, two of which were after the age of 14—the new rule would change nothing. He could transmit citizenship to his kids just as always. (The mother could do the same although the residence requirements for her are a bit lower.)

However, kids of Americans who don't meet the residence requirement and kids of non-citizen but legal service members born overseas will no longer be eligible for automatic citizenship. Also affected would be kids who don't hold green cards, who are adopted overseas by parents who meet the residence requirement. All these categories would have to go through a more cumbersome process.

In the case of American parents who adopt a foreign kid who does not have a green card, for example, the families would need to travel to the U.S. and live here to meet the residence requirement and then have their children take an oath of citizenship. There could possibly be a way for them to process the entire application overseas under a different law, but that would almost certainly be more involved.

Also, under current law, an American serviceman who marries a foreign mom can sponsor his wife for a green card. She can travel to the United States with her children to activate her green card and also become an American citizen on an expedited basis and simultaneously transmit her citizenship to her kids. But under the new rule, she won't be able to do so because the kids will not have met the residence requirements. She would either have to come and live in the U.S. with her children for a stipulated number of years before applying for their naturalization or apply under a different law that is much more cumbersome.

But the most affected would be immigrants who hold green cards who are serving the U.S. government abroad. Even under current rules, their kids aren't entitled to automatic birthright citizenship if born outside the U.S. But non-citizen servicemen at least were able to obtain naturalization on an expedited basis without the usual five-year wait if they had served for one year in the military. They could then transmit their citizenship to their kids. That would no longer be possible. Like citizen servicemen with foreign kids, the non-citizen servicemen would have to apply for their kids under a different—and much more cumbersome—law.

USCIS insists that had the new rules been in place over the past five years, no more than 25 people would have been affected. This strains credulity but if the impact is so small, then why do it? The agency claims that it is only reconciling its rules with those of the State Department. But such reconciliation could have been accomplished by getting the latter to conform to the nominally more immigrant-friendly USCIS rules. That's evidently too much to expect from an administration that deports veterans without qualms.

None of this is particularly draconian. But it shows not just this administration's boundless ambition in trying to stick it to immigrants, but also its boundless pettiness.