Maybe Trump and Warren should team up for their 2020 run to make room on the ballot for better ideas. 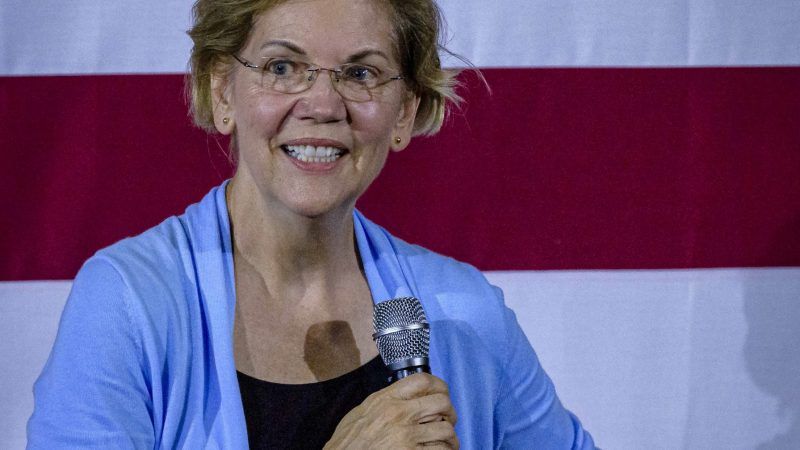 "A lot of giant companies refer to themselves as 'American,'" snipes Elizabeth Warren, Democratic presidential wannabe and U.S. Senator from Massachusetts, in a recent campaign advertisement. "But face it, they have no loyalty or allegiance to America."

Warren warns that pencils are mostly made in China and Mexico (boo hiss). And, she cautions, a third of corporate shareholders are foreign investors! When it comes to doing business across national borders, Warren has set her sights on the same sort of scheme President Donald Trump threatened in 2016, when he pledged punitive taxes on a company if it "leaves our country for another country, fires its employees, builds another factory or plant in another country."

To counter these actions, Warren proposes a scheme of "economic patriotism." She adds, "in a Warren administration, government policy will support American workers." I assume those are the same "American workers" to whom President Trump pledges devotion along with "great Patriot Farmers" in his trade war against China and the world beyond.

Warren's choice of a pencil manufacturer to include among her perp walk of economic villains who dare to operate outside the United States is especially ironic, given that the humble writing implement featured in Leonard R. Read's 1958 celebration of the free market, "I, Pencil." The essay explores the international sourcing of the materials required to make a pencil, as well as the diverse skills and knowledge necessary for its manufacture.

"My family tree begins with what in fact is a tree, a cedar of straight grain that grows in Northern California and Oregon…The graphite is mined in Ceylon [Sri Lanka]…," Read notes. The eraser "is a rubber-like product made by reacting rapeseed oil from the Dutch East Indies [Indonesia] with sulfur chloride."

The voluntary organization of these inputs—"millions of tiny know-hows configurating naturally and spontaneously in response to human necessity and desire"—produces much better results than a clumsy top-down effort to organize matters ever could, Read writes.

"The lesson I have to teach is this: Leave all creative energies uninhibited. Merely organize society to act in harmony with this lesson. Let society's legal apparatus remove all obstacles the best it can. Permit these creative know-hows freely to flow," the famous essay concludes.

Forget tiny know-hows configurating naturally and spontaneously; Sen. Warren wants her damned No. 2 pencils made in Worcester, Massachusetts (or at some other approved domestic location) by American workers under the auspices of a program of "economic patriotism" imposed through "aggressive intervention" by the state. "We will make clear that trade policy must defend and create American jobs," she elaborates elsewhere.

That's exactly the sort of thinking that gets well-informed economists all lathered up, because it invariably ends poorly for American jobs, as well as for everybody's prosperity.

"National Taxpayers Union is joined by more than 1,100 economists urging opposition to this new economic protectionism," the Washington-based organization announced last year in response to President Trump's nationalistic saber-rattling over trade. The missive was the same letter that over 1,000 economists sent in 1930 in opposition to the Smoot-Hawley Tariff Act. "A higher level of protection would raise the cost of living and injure the great majority of our citizens… Such action would inevitably provoke other countries to pay us back in kind by levying retaliatory duties against our goods," economists noted then and restated in 2018.

The National Taxpayers Union should send a copy of the letter over to the Warren campaign, not that she and her cronies are likely to listen. As they do today, politicians ignored economists' warnings in 1930, and the world suffered the consequences.

"The tariff and retaliations against it destroyed the world trade system and demolished the integrated world financial structure," George Mason University's Prof. Thomas C. Rustici wrote for the Foundation for Economic Education in 2012. "The tariff dramatically lowered U.S. exports, from $7 billion in 1929 to $2.4 billion in 1932…U.S. iron and steel exports decreased 85.5 percent by 1932 due to retaliation by Canada."

The European Union also threatens more tit-for-tat tariffs against American goods in its continuing battle with the U.S. government.

The ultimate outcome of the current trade war depends on how nasty it gets, but we're already suffering the consequences.

"We find that the full incidence of the tariff falls on domestic consumers, with a reduction in U.S. real income of $1.4 billion per month by the end of 2018," cautions a paper issued earlier this year. "We also see similar patterns for foreign countries who have retaliated against the U.S., which indicates that the trade war also reduced real income for other countries."

And yes, it can get worse.

"If all tariffs announced thus far were fully imposed, U.S. GDP would fall by 0.68 percent ($170.83 billion) in the long run, effectively offsetting about 40 percent of the long-run impact of the Tax Cuts and Jobs Act. Wages would fall by 0.43 percent and employment would fall 529,544." the Tax Foundation predicts.

There's no reason to believe other countries will be more receptive to a hypothetical President Warren's foreigner-bashing and trade-tinkering just because she sticks a different brand name on bad policy. Protectionism and nationalism would still draw retaliation. Warren could potentially spark an even nastier international conflict than the current president because of her militant hostility to free trade.

Perhaps a Trump/Warren or Warren/Trump ticket for 2020 makes good sense. That way, we could shovel most of the terrible economic ideas onto one ballot line and, just maybe, get an economically literate candidate to run against them.