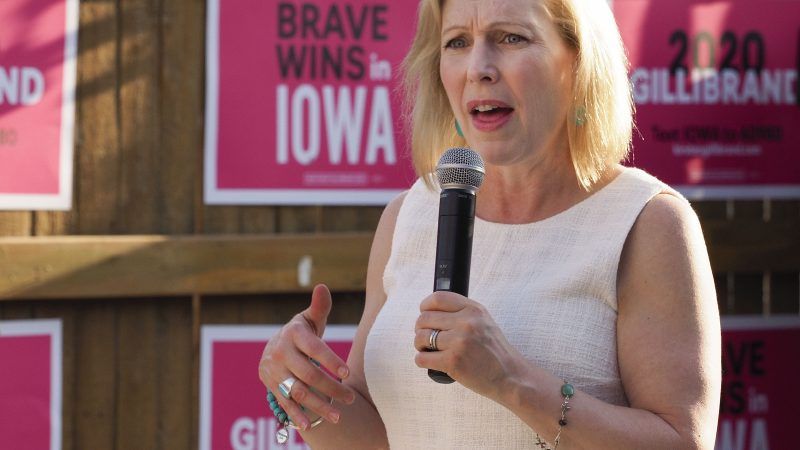 Sen. Kirsten Gillibrand (D–N.Y.), whose candidacy for the Democratic presidential nomination struggled to gain traction, announced on Wednesday that she was ending her campaign.

"I know this isn't the result we wanted. We wanted to win this race," Gillibrand said in a video posted to her Twitter account. "But it's important to know when it's not your time and to know how you can best serve your community and country. I believe I can best serve by helping to unite us to beat Donald Trump in 2020."

Gillibrand made women's rights the cornerstone of her candidacy. According to her campaign website, she says she "has led the crucial national conversation around sexual abuse." Many of her fellow Democrats, however, argue that she aptly demonstrated how not to have conversations around matters of consent and sexual misconduct, citing her public campaign to remove then-friend and colleague Sen. Al Franken (D–Minn.) from the Senate amid sexual misconduct allegations. (The conservative radio host LeAnn Tweeden accused the lawmaker of forcibly kissing her, while Franken says it was a planned part of a comedy sketch he had often done on USO tours.) Franken resigned as Minnesota's junior Democratic senator in 2017, which Gillibrand heralded as a necessary victory of the #MeToo era.

The New York politician also proposed an economic bill of rights, including "guaranteed access to full employment," a $15 minimum wage, and Medicare for All.

In an effort to set herself apart from the crowded flock of contenders, Gillibrand released a high-priority plan for "clean elections," meant to remove megadonors from the political sphere. She proposed giving every voter $600 to be donated to federal campaigns in maximal increments of $200. Only candidates who promised not to accept outside donations above that $200 threshold would have been eligible to receive the taxpayer-funded checks, which the presidential hopeful nicknamed "Democracy Dollars."

After a big media splash in 2017—during #MeToo's first big moment—her profile appeared to be growing at a rapid pace, suggesting that her fight against Franken might elevate her as a major contender. But Gillibrand consistently registered at 1 percent or lower in polls.